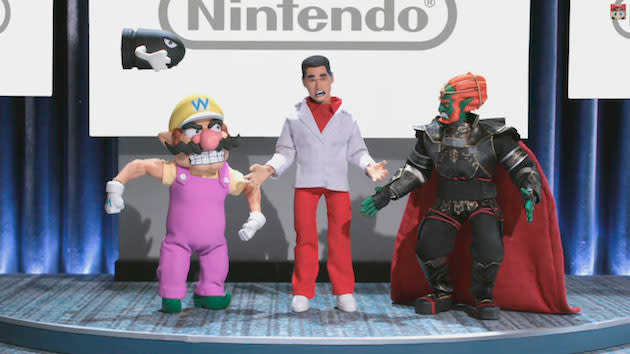 Nintendo once told us that if it didn't change, it "might die," but we never expected the company to turn into a puppet show. It happened anyway: Nintendo's digital E3 event was hosted by Robot Chicken-sourced figures, complete with a demanding audience of stop-motion fans. We've got to give Nintendo credit -- this is certainly a new approach to handling E3. What did the company actually announce, though? Lots of things: including a new, open-world Zelda game, a little bit of NFC wizardry and even a game starring Toad. After the event closed, Nintendo dropped a few more announcements from a "Nintendo Minute" event on the E3 show floor. Miss the show? You can rewatch it in its entirety here, or simply read on for Engadget's full run-down.

When Nintendo launched the Wii U, we wondered what the company was planning to do with the GamePad's NFC functionality. Now we know: toys, toys and toys. Amiibo is Nintendo's answer to games like Skylanders and Disney Infinity, linking its games to figurines. Unlike those properties, however, Amiibo promises to work across several games, and will even have a 3DS peripheral. During its digital event, Nintendo showed how the toys integrate with Super Smash Bros, with each toy functioning as an AI combatant that can be used in single and multiplayer battles -- but Amiibo functionality is planned for Mario Kart 8, Mario Party 10 and Yoshi's Woolly World, as well as other, unannounced games. Speaking of...

The latest game in the Mario Party series was sadly left out of Nintendo's main presentation, but reared its head during the company's Amiibo follow-up presentation. Like its predecessors, Mario Party 10 promises friendship-testing multiplayer competition, but the latest installment seems to make one player the main antagonist: putting them in the role of Mario's archnemesis, Bowser, with the powers to antagonize the rest of the players from the safety of the Wii U GamePad.

Play as yourself in Super Smash Bros. Not satisfied with Nintendo's roster of Super Smash Bros. fighters? Then make your own: Nintendo kicked off its event by announcing not only the game's Amiibo support, but also the ability to throw your own Mii characters into the brawl. Mii fighters can use three different fighting styles: a Mario-like "brawler," as a "swordfighter" like Link or as a Mega Man-esque "gunner." Each of these classes can also select several special moves, making them the most customizable character in the game. Not into Miis? No worries -- Nintendo announced that Kid Icarus' Lady Palutena would be a playable character, too. The creators behind Yoshi's yarn-based adventure took a few minutes to talk about how it's different from that very similar-looking Kirby game we saw a few years back. Specifically, the developers talked about how exploration-focused they want the game to be, and how co-op gameplay factors into the game design. The team talked about how they knit actual Yoshi dolls to make sure that the character in-game looked realistic and slapped a released window on the title: Expect it sometime in 2015.

Unless he's teaming up with Mario or driving a go-kart, Toad doesn't get much action. That's about to change: One of Nintendo's least-expected announcements was Captain Toad: Treasure Tracker -- a Wii U title derived from the Captain Toad mini-game from Super Mario 3D World. If you're looking for something to do with your Wii U GamePad, this is the title for you: Players use the GamePad to manipulate elements in levels to help Toad (who can't even jump) find treasure and overcome obstacles. There are not a lot of details on the title just yet, but the above trailer teases a few of the game's GamePad-centric puzzles. It's adorable, and it's due out holiday 2014.

The Legend of Zelda goes open world in 2015

How did Eiji Aonuma kick off development of Nintendo's next big Legend of Zelda game? By going back to the source, apparently. Aonuma says the original games allowed players to explore a wide area, but the series' 3D iterations were less open and connected by comparison. The next game hopes to break that paradigm, and promises to allow players to enter any area of the game from almost any direction: Think of it like Skyrim in the land of Hyrule. Unfortunately, the title doesn't have a proper name yet, just a release year -- next year.

Dig that fancy, new 3D game engine running Pokémon X and Y? Check out the above video: Game Freak's using it to remake the series' third-generation games as Pokémon Omega Ruby and Pokémon Alpha Sapphire. This includes the engine's new dynamic battles and the Pokémon mega-evolutions introduced in the latest iteration. Catch'em all over again on November 21st.

Bayonetta 2 lets you dress up like Nintendo characters, play the first game

The Wii U is short on third-party exclusives; it's true -- but early on, it secured the Bayonetta franchise as a Nintendo-exclusive title. It was then, and still is, an odd exclusive for Nintendo's family-friendly arena. Still, the company is doing its best to dress the game up for Nintendo's audience, and the game's heroine can now sport Metroid- and Legend of Zelda-themed outfits, at least in the original game. Oh, did we mention that Bayonetta 2 will come with the full original game for free? It totally does -- both will be available (in one package, of course) in October of this year.

Who has a flowing dress, a magical bow and the ability to slay hordes of moblins with a single blow? Why Princess Zelda, of course. The team behind Hyrule Warriors sat down during the digital event to talk about the challenges of merging the two series, but what really stuck out were the features and characters. Players will be able to take control of not only Link and Impa, but also Princess Zelda and Midna. Best of all, multiplayer won't be limited by your TV's split screen: Player 2 can keep their action exclusively on the Wii U GamePad, giving both players a full-screen experience. That game launches September 26th, 2014.

Kirby and the Rainbow Curse

Kirby's first major outing on the Wii U echoes the character's past: Kirby and the Rainbow Curse looks to be a spiritual successor to the Nintendo DS' Kirby: Canvas Curse, a stylus-controlled platformer that had players directing Kirby by drawing lines on the handheld's touchscreen. Rainbow looks to be more of the same, but in glorious HD -- sadly, this title won't hit shelves until sometime next year.

Monolith Soft's nebulous Wii U exclusive finally has a name, and that name is Xenoblade Chronicles X. This Japanese RPG is one of the system's most anticipated niche titles, and it's good to finally see it getting its own identity. That said, this open-world sci-fi game won't land until 2015 -- but check out the trailer to whet your appetite. If you've been lurking on gaming forums, you knew this was coming: Mario Maker, Nintendo's Super Mario Bros. level editor. Nintendo's digital event did tell us a little more about the game than leaks suggested though; in addition to being able to create custom levels in the classic NES style, the tool seems to allow players to switch between old and "new" Super Mario graphics on the fly. Start planning now -- you won't be building your own Mushroom Kingdom until 2015.

Splatoon offers a new spin on four-player arena combat: squid ink. Each team is defined by a specific color of ink, which they can swim through by transforming into a squid -- allowing them to sneak, slide and ambush their enemies, provided they're swimming through the correct hue. This arena-battle game is due out in the first half of next year.

As Nintendo's digital event closed, the company continued its live broadcast from its E3 booth, quietly announcing titles that didn't make the cut for the main show. After revealing the aforementioned addition to the Mario Party franchise, Nintendo's team announced Fantasy Life for the 3DS -- a create-a-fantasy RPG game that gives characters a chance to embark on their own fantasy adventure... or so Nintendo's press release says. Check out the trailer above to judge for yourself and pick it up on September 16th, if you're so inclined.

Two of the most unique Nintendo properties are coming together for the first time: Professor Layton and Phoenix Wright are teaming up to end a witch hunt -- and the title has finally been announced for Western shores: Look for it on September 16th, 2014.

If you've been paying attention to the dates in this list, you know a lot of Nintendo's best upcoming titles are going to have to wait until next year. Frankly, it's a bit of a letdown -- but the company has a backup plan: the Nintendo eShop. During its post-event broadcast, Nintendo played a teaser showcasing some of the digital content it plans to offer for the remainder of the year, including 3DS and Wii U games like Affordable Space Adventures, the Ace Attorney Trilogy, Thorium Wars: Attack of the Skyfighter, Chariot, Shovel Knight, STARWHAL: Just the tip, Gunman Clive 2, Citizens of Earth and tons of other titles. Hopefully, those will be enough to tide us over until next year.

Compared to Sony's and Microsoft's long presentations, Nintendo's digital event seemed deceptively short -- but don't be fooled: It's not actually over, not even now. Click on that above video and you'll find that Nintendo is broadcasting continuous coverage for the remainder of the show, featuring developers and Nintendo employees exploring the company's booth, playing games and quietly dropping bits of news every now and then. Nintendo is slowly trickling announcements on its Twitter feed, too -- telling fans about upcoming titles like Pokémon Art Academy.

Is Nintendo's new approach to E3 novel, or just annoying? Scroll down just a bit further and let us know what you think in our comments section.

In this article: 3ds, e3, e32014, nintendo, nintendodigitalevent, nintendodirect, poll, wedgies, wiiu
All products recommended by Engadget are selected by our editorial team, independent of our parent company. Some of our stories include affiliate links. If you buy something through one of these links, we may earn an affiliate commission.