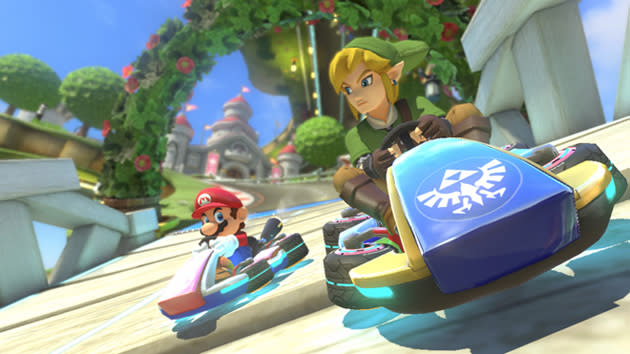 Nintendo has taken a few steps to modernize its gaming experience, but downloadable content (DLC) is still a sore point; even New Super Luigi U is more of a separate (and fairly expensive) title than a proper booster pack. Today, though, there are signs that the company is getting serious about improving its less-than-stellar reputation with add-ons. Nintendo has offered a sneak peek at a Mario Kart 8 expansion that adds The Legend of Zelda's Link, F-Zero's Blue Falcon ship and eight new courses, among other things -- that's a lot of goodies to keep you coming back. It should arrive in November for $8, and Animal Crossing-themed DLC due next May will add similar numbers of cars, characters and tracks.

It's not shocking that Nintendo would pour that energy into Mario Kart when it's one of the Wii U's few big hits. Nonetheless, the move hints that the developer is at last willing to show games the same kind of after-sale devotion as many other studios. You can buy at least one big Nintendo game knowing that there will be some worthwhile DLC to lure you back a few months down the road.

Update: Turns out that buying both packs will net gamers a discount: each add-on sells for $8 individually, but will be available in a bundle for $12. Oh, and folks who do buy both packs will get one more feature: the ability to change the color of Yoshi and ShyGuy.

In this article: animalcrossing, dlc, downloadablecontent, f-zero, gaming, legendofzelda, mariokart, mariokart8, nintendo, videogames, wiiu, zelda
All products recommended by Engadget are selected by our editorial team, independent of our parent company. Some of our stories include affiliate links. If you buy something through one of these links, we may earn an affiliate commission.