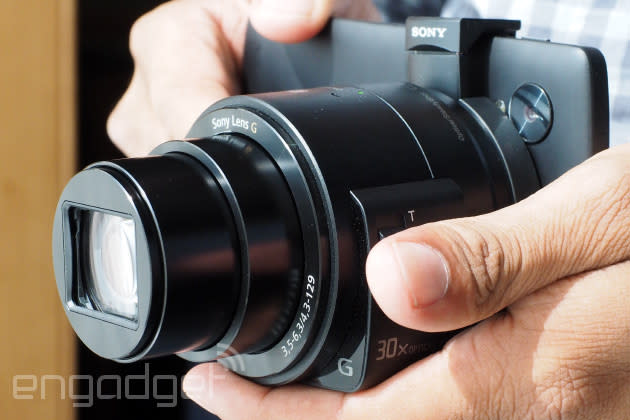 At last year's IFA in Berlin, Sony announced its first two "lens cameras," a pair of point-and-shoot cams that clip onto your smartphone. You use your phone's display to control the camera, and while you can technically fire off shots using the integrated zoom toggle and shutter release, there's no built-in LCD. Given the limitations, they're not for everyone, but there's apparently been enough interest for Sony to keep the QX line going, with a 30x zoom version and a unique interchangeable-lens model that accepts any E-mount optic now making their debut here in Berlin. Sony's QX1 is by far the most interesting model of the bunch. There's an interchangeable lens mount and a large 20.1-megapixel APS-C sensor, essentially giving your smartphone DSLR-like image quality. You'll have access to many of the same features as Sony's mirrorless camera lineup, including a 16,000 top ISO, 1080/30p video, advanced shooting modes and support for RAW captures. There's also a pop-up flash and a much beefier battery (the same pack that Sony ships with its mirrorless cams), letting you capture up to 440 stills or 150 minutes of video on a single charge. The QX1 is expected in stores in November for $400.

In this article: camera, cameras, hands-on, ifa, ifa2014, ilc, InterchangeableLens, InterchangeableLenscamera, lenscamera, lenscameras, qx1, qx30, sony, Sony QX1
All products recommended by Engadget are selected by our editorial team, independent of our parent company. Some of our stories include affiliate links. If you buy something through one of these links, we may earn an affiliate commission.