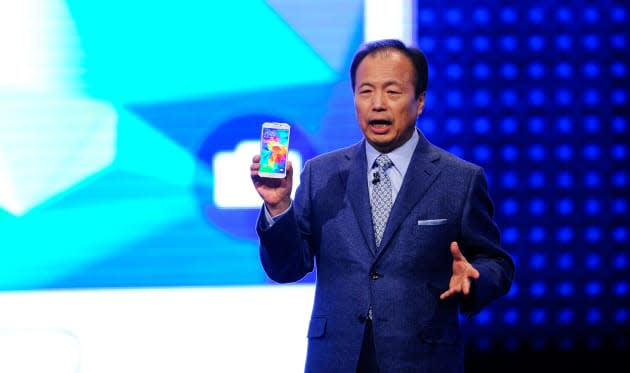 With rumors swirling about the fate of mobile head J.K. Shin, Samsung has announced that he would keep his job after all. Reports suggested that Shin -- who recently took a huge pay cut -- may be replaced by consumer electronics chief B.K. Yoon in light of weak smartphone sales. Samsung's top money-making models, the Galaxy S5 and Note 4, have met with a tepid market reception stateside despite design overhauls, causing Samsung's profits to fall off the map. The company is also battling tough rivals in China like Huawei, Xiaomi and Lenovo.

The Korean company opted for stability in its latest round of shuffle-the-executives, with all the company's division heads retaining their positions. Industry-watchers say Samsung's acting chairman Jay Y Lee likely chose not to rock the boat since his father, chairman Lee Kun-hee, is ailing in the hospital after suffering a heart attack. Samsung is also busy restructuring its operations to cut excess fat and pay an upcoming $6 billion-ish inheritance tax for the younger Lee and his sisters. However, many think Samsung's axe is still poised above J.K. Shin's neck, and if smartphone and tablet sales don't pick up stat, he'll be gone.

In this article: mobilepostcross, samsung
All products recommended by Engadget are selected by our editorial team, independent of our parent company. Some of our stories include affiliate links. If you buy something through one of these links, we may earn an affiliate commission.