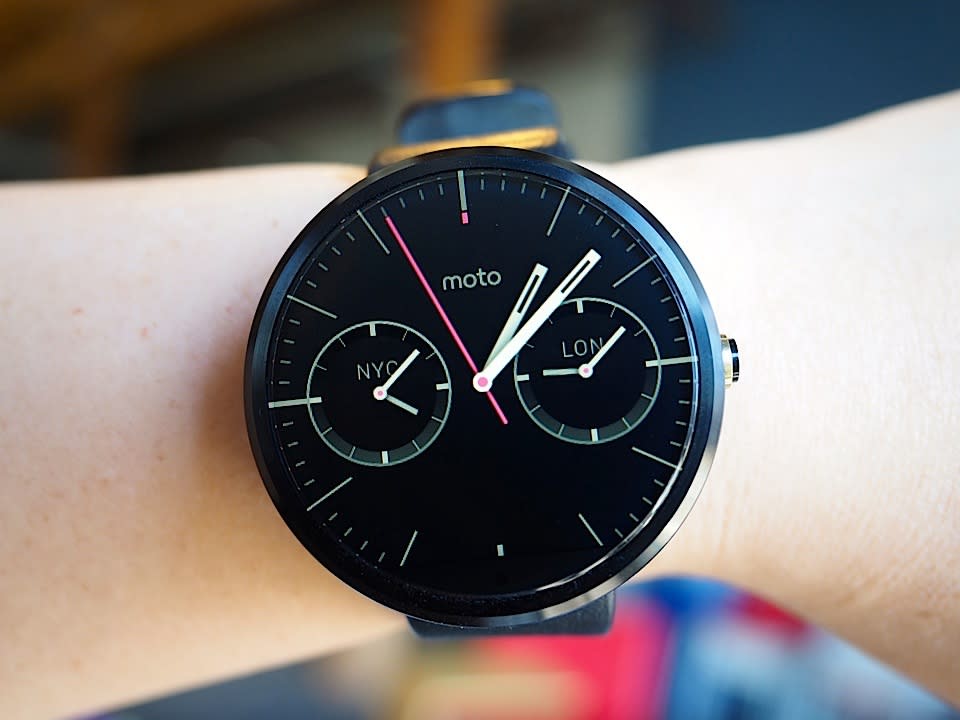 When Android Wear was announced back in March, we asked our readers in a poll which of the first two launch devices they wanted: the Moto 360 or the LG G Watch. The Moto 360 won hands down, by a three-to-one ratio. That anticipation only increased as competing Android Wear products hit the market first. The Moto 360 was finally released in September, and we gave it a score of 76 in our own review, saying Motorola's smartwatch "outclasses everything else on the market" and dubbed it "the Android Wear watch to beat." Now that this highly coveted wearable has been out for a while, how does it hold up to your scrutiny? We took a look at the user reviews you left us on the Moto 360's Engadget product page to find out where it delivered -- and where it stumbled.

What users were initially most attracted to was the round shape of the display, which made the device resemble traditional watches more than rectangular smartwatches. In that respect, 4brandon says it's rather "luxurious" and elegant, "perfect for business meetings." Crawlgsx finds the screen itself beautiful and tomw3141 complimented its "good resolution and crisp images." But the excellent visibility comes at a cost to size, which was "far too big" for tomw3141, who says the device feels like "someone took a cookie cutter to a smartphone." And while the distinctive "flat tire" line at the bottom of the screen might be "annoying" to users like dcepulis, montelds actually says it's a "perfect look" and Pur3Bolt thinks the line makes the device "look even better."

So it looks great, but how does it perform? Pur3Bolt says that it's "easy to use for newcomers," and crawlgsx was also impressed, never missing a message even though his phone was on silent. Tomw3141 was disappointed by the lack of instructions, but still found the Moto 360 to be the "ultimate accessory" for voice commands. All that usefulness comes at a cost to battery life, though, with crawlgsx finding the battery life "meh" and Pur3Bolt calling it "good for people that don't get notified every few seconds." But, with standard usage, and not "as some sort of crazy toy to do everything," montelds says the battery life can actually be "great."

Equally important as battery life is durability; something meant to be on your wrist all the time is bound to take a few dents. And in that respect, dcepulis notes it "seems to be" scratch-resistant, while 4brandon goes so far as to say that you can go hiking with it. However, montelds actually reports that his Moto 360 has a small crack in it from when he was doing laundry, but it "isn't noticeable unless looking for it."

Overall, our readers seem pleased with the Moto 360, even despite its flaws. A few hiccups are to be expected from a first-generation product, enough that tomw3141 even sent his back. But despite this wearable being "NOT perfect," crawlgsx still calls it "a great start." And while crawlgsx will be keeping his device, both he and tomw3141 are excited to see what Motorola's next-generation device will look like.

In this article: mobilepostcross, Moto 360, Moto360, Motorola, reviewroundup, userreviewroundup
All products recommended by Engadget are selected by our editorial team, independent of our parent company. Some of our stories include affiliate links. If you buy something through one of these links, we may earn an affiliate commission.