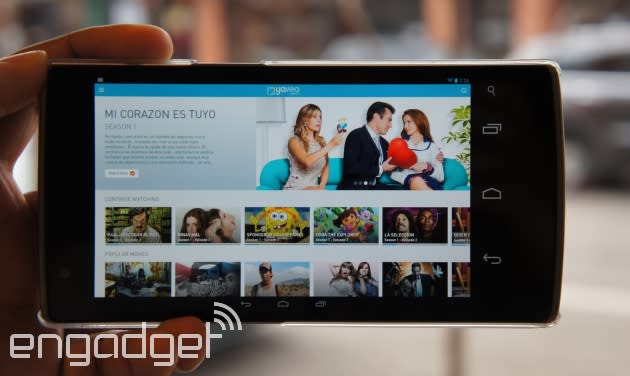 Our world isn't quite ready for internet TV providers that compete with traditional cable and satellite packages, but what about markets that aren't as well served? DirecTV is diving right into internet TV, beating Dish Network and Sony's PlayStation Vue to the punch with its new Yaveo streaming service that exclusively features Spanish-language programming for customers in the US. Currently it's available on PCs, Macs and Android, with clients for iOS, xbox 360 and other platforms soon. So what can you watch? It sources content from beIN sports, MTV and its Spanish-language network Tr3s, Univision and several others, all for $7.99 per month. There's even live TV feeds from beIN Sports en Español, Cine Sony Television and ¡Hola! TV. The only thing stopping us from breaking out Rosetta Stone and opening an account is it current lack of the Breaking Bad remake Metástasis. But if you do speak the language, then the future of TV is here, and there's evne a free trial month to start.

In this article: directv, hdpostcross, InternetTv, iptv, mobilepostcross, spanish, streaming, yaveo
All products recommended by Engadget are selected by our editorial team, independent of our parent company. Some of our stories include affiliate links. If you buy something through one of these links, we may earn an affiliate commission.