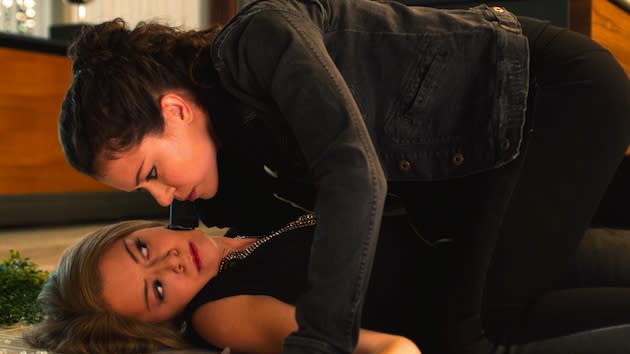 The latest TV show to become a streaming-exclusive on Amazon Prime's video service is the sci-fi series Orphan Black. Like Amazon's recent deal to pick up streaming rights for FX's The Americans, this agreement with BBC America comes just ahead of the show's return for season two. While Amazon attempts to build up its stable of original series (voting on the current pilot season ends soon), collaborating with broadcasters for a financial and exposure push of returning series seems like a worthwhile strategy. Other shows that viewers won't find on Amazon's competitors include Suits, Falling Skies, Downton Abbey, Justified, Workaholics, and Under the Dome, while this summer CBS' Extant joins the pack. Of course, Netflix has an original sci-fi show of its own, Sense8, on the way later this year from the folks behind The Matrix and Babylon 5. Right now though, US viewers can either recap or become introduced to Tatiana Maslany's Clone Club before the season two premiere April 19th.

In this article: amazon, AmazonPrimeInstantVideo, hdpostcross, orphanblack, video
All products recommended by Engadget are selected by our editorial team, independent of our parent company. Some of our stories include affiliate links. If you buy something through one of these links, we may earn an affiliate commission.