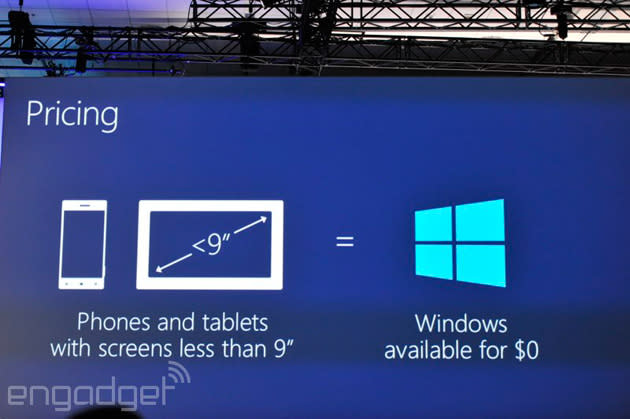 It turns out that those rumors of Microsoft cutting Windows prices to spur adoption were true -- and then some. The company has announced that Windows will be free for hardware makers to use on phones, tablets with screens under nine inches and Internet of Things devices. Suffice it to say that this is a huge move for a tech giant whose operating system licensing is arguably its bread and butter. Microsoft is obviously willing to take a financial hit to compete against Android, Chrome OS and other freely available platforms.

In this article: build2014, free, internetofthings, microsoft, software, tablet, tablets, windows, windowsphone
All products recommended by Engadget are selected by our editorial team, independent of our parent company. Some of our stories include affiliate links. If you buy something through one of these links, we may earn an affiliate commission.