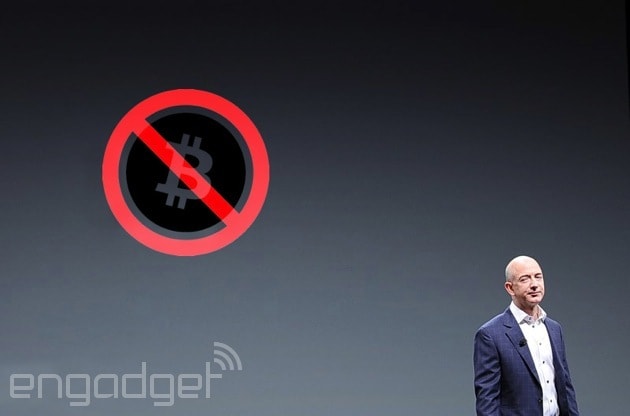 Amazon has quashed the idea that it would be accepting Bitcoin as a method of payment. "We have considered it," said Tom Taylor, Amazon's head of seller services in an interview with Re/code, "but we're not hearing from customers that it's right for them, and don't have any plans within Amazon to engage Bitcoin." That stance might sound strange, given the company's history of staying ahead of its retail rivals, but there are a number of reasons why it makes sense. Not only is Bitcoin a deeply unstable proposition, despite its growing fame, but it's also becoming clear that Amazon already has e-currency and payment-platform ambitions of its own.

Bitcoin isn't currently accepted as a currency in the US, China, Russia or India. It exists in a legal gray area where it's not legitimate, but not outlawed either. Senator Joe Manchin, once called for a ban on the cryptocurrency, and while his was a lone voice on Capitol Hill, it's reasonable to assume that other lawmakers could pick up the mantle. With the IRS currently treating the coinage as "taxable property," every payment made in the US is liable for capital gains tax, adding a further veil of complexity for businesses willing to adopt the currency. Amazon isn't alone among the big companies that are holding out against it either, although eBay and PayPal are reportedly giving it some serious thought.

If there's one thing that Amazon strives for, it's control, and it certainly can't control Bitcoin

In the interview, Taylor said that adopting Bitcoin was not a priority, and that's entirely reasonable, considering that it's a minority currency. There's no official way to calculate how many people own and use Bitcoin, but according to a report from BitScan, the total number of users is no more than 2.5 million. In fact, the report goes further to suggest that if you exclude people who have the odd cent in a wallet, the Bitcoin community -- people who actually use the currency on a regular basis -- could be as small as 500,000. If that is the case, then it's highly unlikely that Amazon would devote the engineering, accountancy and political resources to develop a system that would cater to the same number of people as would turn up for a Seattle Seahawks victory parade.

Between February and March of this year, the better part of $500 million worth of Bitcoin was stolen from the Mt. Gox and Flexcoin exchanges. The currency may have been based on the notion that, so long as more than 50 percent of all users were behaving legitimately, then the system was tremendously secure. Now, however, Bitcoin's reputation as a safe place to hold your money is gossamer-thin. Any large corporation would leave itself open to a huge amount of risk if it began to accept transactions that aren't approved by trusted servers, but instead by "the community at large." Even the most daring of businesses are likely to balk at the idea that the general public, or at least a small subset of it, should have any influence on how it does its banking. 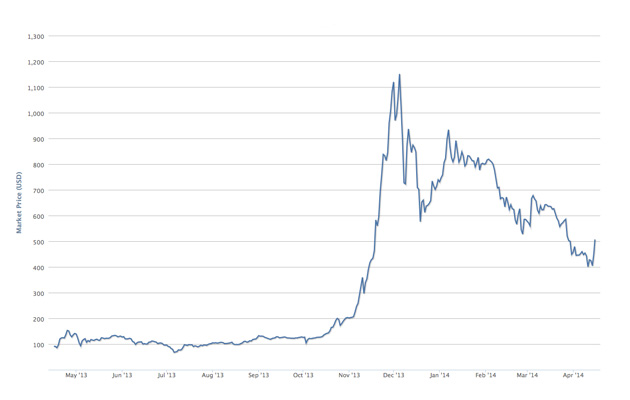 If there's one thing that Amazon strives for, it's control (which is why it launched its own TV, tablet, e-book and server platforms) and it certainly can't control Bitcoin. (Honestly, we're not sure anyone can.) Hell, it's pretty powerless even when it comes to credit card companies. It may have upwards of 200 million cards on file, but it has a reportedly strained relationship with banks. Much of that animosity stems from the fact that they won't provide Amazon with the purchasing information that it thrives upon. In the Re/code interview, Taylor said that he is being tasked with developing the company's commerce tools, but added that he would only build a rival to MasterCard if he "could do a better job" to benefit the consumer.

Perhaps, the company's ambitions lie elsewhere -- a virtual currency of its very own. Amazon launched Coins last year, and while it's currently only used for app purchases on the Kindle Fire, it's already developed the infrastructure and discounts to lock consumers in. Since one of the key tenets of a virtual currency is to devalue cash and encourage users to spend more, it would make sense that a retailer like Amazon would want people turning dollars into Coins. Now, we admit that we can't imagine people buying a latte at Starbucks using Amazon Coins, but it's significantly more plausible than people using Bitcoin. And it would seem counterintuitive for Amazon to adopt what could turn out to be a potential competitor.

That being said, analyst Guillermo Escofet doesn't believe that Amazon will make any sort of larger splash into the virtual currency world. In his mind, "virtual coin currencies are designed to handle small transactions" as they "save on what would be an unsustainable level of interchange fees." Not to mention that the discounting of Coins "might eat too much into Amazon's margin in books and music."

Instead, he feels that Amazon's direct-billing relationship is where the company's strength lies, since "hundreds of millions of customers have registered their payment details on the Amazon platform." Now that seems to make a lot more sense. Especially with Amazon already muscling in on Square's and PayPal's territory as an enlightened middleman with its Login and Pay system, which allows people to use their Amazon credentials to purchase goods and services at other outlets.

Of course, running a store across the world is likely to involve several issues regarding currency fluctuations. For a company of Amazon's scale, these minute shifts in values against the dollar are a technical and logistical headache to deal with -- even when those changes amount to just a few cents. Compare that to Bitcoin, however, and it's a drop in the ocean. In just four months, the system has fallen from a high of $1,151 during the holiday season to under $500 yesterday. Imagine purchasing an item on Monday, but by the time the transaction cleared on Tuesday, the value of the payment had halved. Who do you think would pick up the bill for the lost cash?

Amazon is a company that won't even reveal how many Kindles it sells, so we're not likely to get an early tip-off as to its plans in the commerce space. However, Amazon has a lot of power, and we can't imagine it would use that to its, and its customer's, disadvantage. In his annual shareholders' letter, Jeff Bezos said that Amazon Login and Pay now accounts for a large proportion of transactions with its partners, and that we should all "look for more in 2014." Whatever happens, the next nine months are going to be very interesting and it's pretty clear it won't involve Bitcoin.

(Correction: This article originally stated that Senator Manchin was still seeking to ban Bitcoin. He has since taken a less stridently anti-Bitcoin stance. Though, we're sure this isn't the last time the currency will face challenges on Capitol Hill.)

In this article: amazon, Bitcoin, Business, editorial, Money, Payments, poll, Tom Taylor, wedgies
All products recommended by Engadget are selected by our editorial team, independent of our parent company. Some of our stories include affiliate links. If you buy something through one of these links, we may earn an affiliate commission.