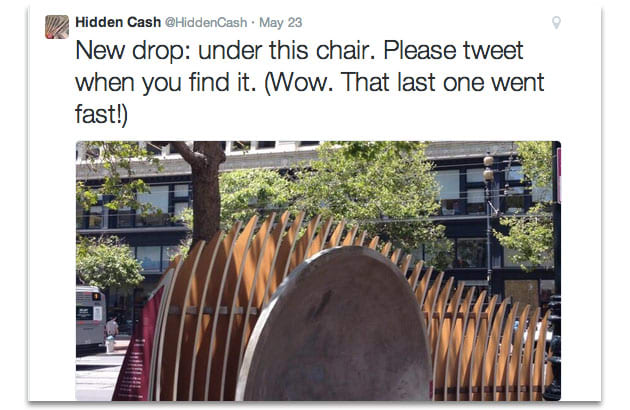 If you need cash and don't mind chasing Twitter clues around San Francisco, you're in luck. A group called @HiddenCash, apparently led by a wealthy real estate developer, has decided to try a "social experiment" by sharing their good fortune with random strangers. They choose hiding paces around the city like the underside of a park bench or a parking meter, then cache money-stuffed envelopes labeled "@HiddenCash -- Tweet when you find." Though that makes our "PR stunt" antennae twitch, they told the Bold Italic that they have "no commercial interest" and just want to draw attention to the massive income inequity in San Francisco. For critics who though the money could be better used, they added that they already donate to needy charities and encourage those who find the cash to do the same. We're not sure if we're buying all that, but what the hell -- judging by their Twitter feed, a lot of people have had fun with it so far.

Via: The Bold Italic
Source: @HiddenCash (Twitter)
In this article: Cash, Experiment, ScavengerHunt, Social, Twitter
All products recommended by Engadget are selected by our editorial team, independent of our parent company. Some of our stories include affiliate links. If you buy something through one of these links, we may earn an affiliate commission.