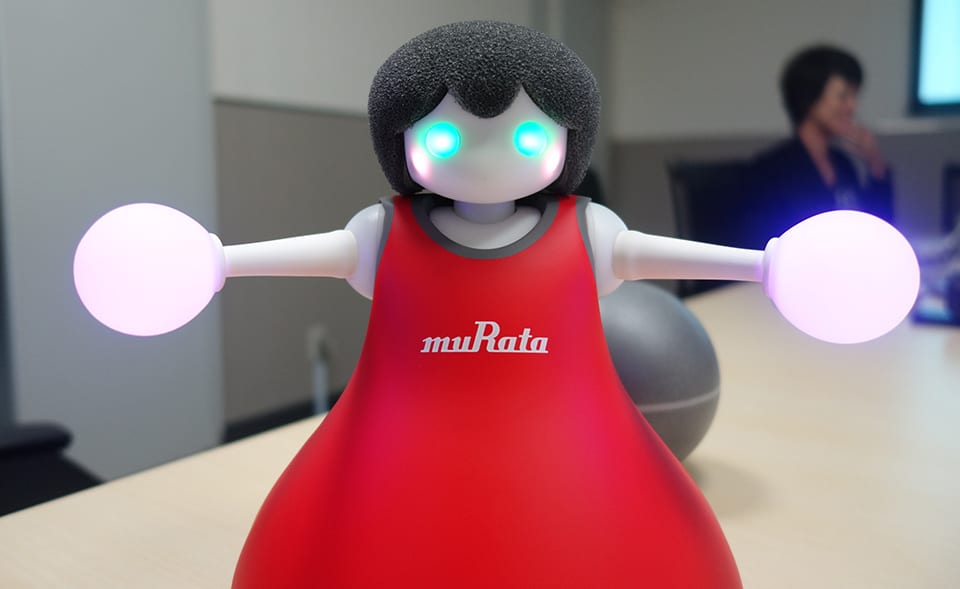 It's probably the most Japanese thing I've seen in my first year of covering the country for Engadget: Robo-cheerleaders, barreling around in sync like some sort of Japanese girl "idol" group. In total, there are 10 Cheerleader bots (with two standby units), with light-up cheeks, pom-pom arms that look like PlayStation peripherals and glowing eyes. They glow; they lift their arms; they form ensemble shapes; and they are arguably the most adorable, Weeble-esque robots you've ever laid eyes on. Following the bicycling Murata Boy and the unicycling Murata Girl, here's the Murata Cheerleader and her nine sisters. They're about to dance in formation, all while balancing on a ball. Not only because they simply can, but also because this is how their parent company showcases its (often mind-numbing, let's admit it) sensors and components to both businesses and Joe Public alike.

Murata might not come to mind as the foremost robot maker -- that's because it isn't. However, the component and sensor maker has a long history of unveiling tiny robotic mascots that showcase its sensors and technology that can (and do) make their way into everyday devices like smartphones. As Murata's Section Manager Koichi Yoshikawa puts it, while the Murata Boy series of robots might seem a little frivolous, it's about communicating something fun and the potential of high-functioning sensors, some of which could make their way into self-driving cars.

Understandably, ensuring a robot can keep its balance on a ball (with a special non-slip coating), takes a bit of work. There's a trio of gyroscopic sensors that monitor pitch, yaw and roll in three dimensions and detect tilt angles, while a trio of wheels spin onto the ball, rotating it all in the necessary directions and speed to either keep Cheerleader atop the ball, or move it where needed. (Similar gyro-sensors are used in electronic stability control (ESC) systems to prevent cars from skidding.) The nature of using the sphere as the wheel of sorts, is that the robot can move in all directions, regardless of where it's facing -- ideal for avoiding other robot cheerleaders. 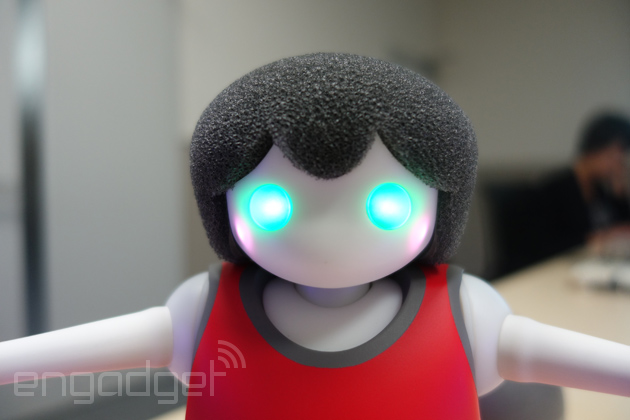 This is all well and good, until you throw in another nine ball-balancing robots. Ensuring they keep upright is apparently a software issue, pairing multiple sensors within each robot with two towers that project a combination of ultrasonic and infrared signals. As we all know, light and sound travel at different speeds, thus when the robot gets detected (there are five mics and four sensors underneath the Cheerleaders' microphone/sponge wig), the difference in signal timing gives distance. With the two posts, this also gives the location on a 2D plane. From there, the team can plan the (obviously important) choreography. If a single robot stumbles, not only does the software recalibrate to keep it on track, but it also tells other robots to steer clear.

The robots use an intentionally low-frequency signal to ensure that it's picked up easier. According to the company, this would make them idea for working inside less-than-ideal signal conditions, like deep within buildings and even inside structures, such as tunnels and bridges that would require maintenance.

Single search robots, once they've found someone in need of rescue, could coalesce together to make a bigger bot capable of assisting -- which was the second-most Japanese thing I heard that day.

Yoshikawa-san elaborates that some of the base research for these robots wasn't to create synchronized robot Cheerleaders (I'm still shocked); instead, it was part of a study project with Kyoto University into using robots to effectively complete high-speed search and rescue sweeps as a unit. Further still, there's also the notion that single search robots, once they've found someone in need of rescue, could coalesce together to make a bigger bot capable of assistance -- which was the second most-Japanese thing I heard that day.

Source: Murata
In this article: buttheydontfalldown, ceatec, ceatec2014, cheerleader, hands-on, japan, murata, murataboy, muratacheerleader, robots, video, weebleswobble
All products recommended by Engadget are selected by our editorial team, independent of our parent company. Some of our stories include affiliate links. If you buy something through one of these links, we may earn an affiliate commission.