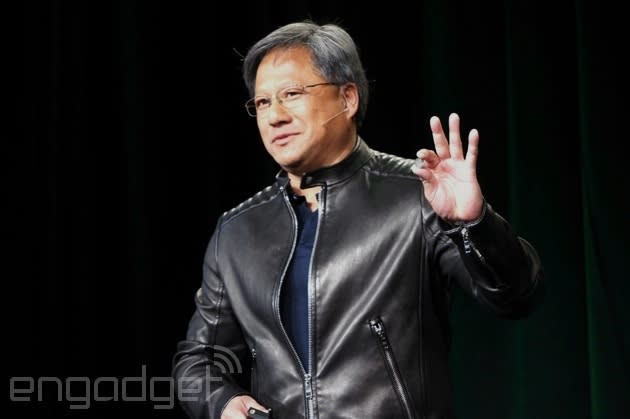 How powerful can a mobile processor get? Try a teraflop worth of raw computing muscle. NVIDIA just announced the Tegra X1 "mobile super chip" -- and yeah, it's sort of fast. The X1 is the first mobile chip to achieve a teraflop of computing power, co-founder and CEO Jen-Hsun Huang said on stage at NVIDIA's CES press conference tonight. That makes it just as fast as the world's fastest supercomputer in 2000. It's basically the same Maxwell GPU architecture for PCs, which the company announced several months ago, brought to mobile. Tegra X1 packs in an eight-core 64-bit CPU and 256 GPU cores. Altogether, it should deliver around twice the performance of last year's Tegra K1 mobile chip.

To prove just how capable the X1 can be, Huang showed the Unreal Engine 4 "Elemental" demo running off of the chip (it's unclear if it was in real time or just a recording). That's a graphically complex 3D scene that's been used to show off the rising computational capability of video cards and consoles over the past few years. While the demo didn't look perfect on the X1 -- it wasn't as detailed as I remember it; there weren't as many particle effects; and there was quite a bit of slowdown -- it was still impressive for something mobile.

Of course, since the X1 is something meant for smartphones and tablets, power efficiency is key. Huang pointed out that it was able to run the Elemental demo using just 10 watts of power. A year ago, the Xbox One needed 100 watts to run Elemental. And over two years ago, a leading Nvidia GPU had to burn 300 watts to run it. You won't be stressing your phone with complicated 3D rendering all of the time, but the X1's performance in this demo is a good sign that it could be more efficient at more mundane mobile tasks.

Tegra X1 also serves as the core of NVIDIA's new car platforms. Drive CX is its attempt to bring gorgeous graphics to your dashboard, while Drive PX is its futuristic auto-pilot computer (which is also powered by two X1 chips). But while we've seen plenty of bold attempts at remaking the in-car experience -- most recently with Android Auto and Apple's CarPlay -- we're still waiting for them to actually make it into cars. It may be a different story for NVIDIA, which has a loyal auto partner in Audi. Ricky Hudi, Audi's head of electronics, joined Huang on stage to point out the company's technology has helped Audi vastly accelerate its tech development time from five years to just one.

NVIDIA seems well-poised to take on (and even leapfrog) Qualcomm's upcoming Snapdragon 810 chip when the X1 starts hitting devices in the first half of this year. Tegra hasn't exactly been the mobile success NVIDIA has been hoping for so far, but with its push into car tech, it may just end up inspiring the traditionally conservative auto industry.

In this article: ces, ces2015, mobilechips, mobilepostcross, nvidia
All products recommended by Engadget are selected by our editorial team, independent of our parent company. Some of our stories include affiliate links. If you buy something through one of these links, we may earn an affiliate commission.