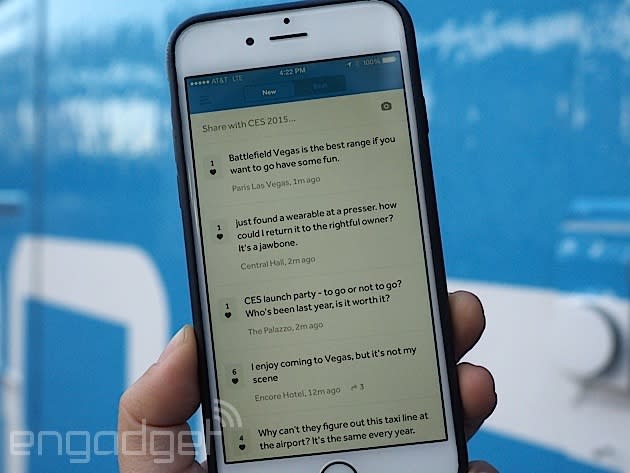 Secret, the anonymous-sharing app that took Silicon Valley by storm early last year, recently underwent a serious overhaul that saw a massive app redesign, a new private chat feature and a renewed focus on location-specific missives. So, for example, instead of confiding your innermost desires to your "friends" (which are essentially people in your contacts list), you could post them to a location, which should theoretically hide your real identity even further. Over the weekend, however, Secret introduced yet another new feature: You can now post to specific events as well. The first event Secret is trying this out with? CES 2015, of course.

As Chrys Bader, Secret's co-founder tells us, the idea behind this feature is to introduce a backchannel of sorts to events. "We're focusing Secret on conversations to beyond just friends," says Bader. "We want you to share with people around you, to bring transparency to the community." So for everyone who's on the ground in Vegas this week, they'll see a new section in the Secret app simply called "CES 2015" that lets you post, well, event-specific secrets.

"Most of us try to use Twitter and hashtags at events," says Bader. "However, the conversation suffers through spending of social capital. With Secret, you can post to everyone here at the event, and not have it associated with your personal account." So far, most of the posts in the CES 2015 section seem to be snark on product announcements and the terrible food in pressrooms. It's not terribly exciting, but then again, the show has barely begun.

In this article: ces2015, secret
All products recommended by Engadget are selected by our editorial team, independent of our parent company. Some of our stories include affiliate links. If you buy something through one of these links, we may earn an affiliate commission.