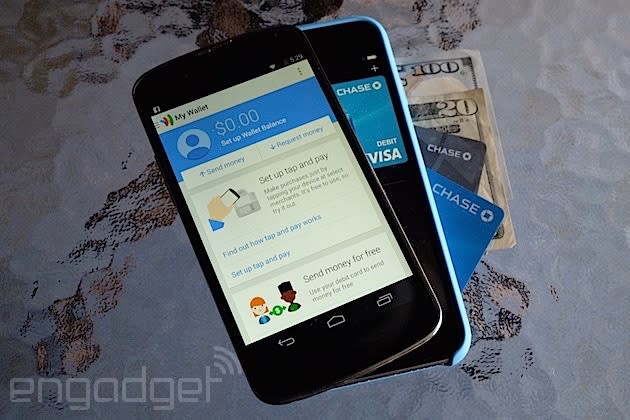 Don't call it a comeback. Okay, maybe you should: Google wants to revive Wallet after seeing how popular Apple Pay has been, according to The Wall Street Journal. To do so, Mountain View is apparently in the early stages of a deal to take ownership of the carrier-owned Softcard as part of this Lazarus act for its mobile payment system. Previously, carriers in the United States were reticent to preload Wallet onto their devices because, at the time, they were trying to launch ISIS, going so far as to block the chip that stores credit card info. Times are different now, as WSJ tells it, because neither AT&T, T-Mobile or Verizon gets a cut from Cupertino with surprise hit Apple Pay -- something that'd change by working with Google. How's that? The internet behemoth will reportedly pay them to feature Wallet on their Android phones and give them a bigger cut of the money it makes off of ads that live inside mobile searches.

It's worth noting that this is all very early, and there's a chance it might not happen. After last month's sale rumors, it does add more fuel to the idea though, and we might see confirmation come I/O this May. What's interesting is the way this shows how differently Apple and Google have to operate. The former can just drop a new technology and flood the marketplace with compatible products, while the latter has to jump through all kinds of hoops (and drop a chunk of cash) just to get everyone on board.

In this article: apple, applepay, ATT, google, GoogleWallet, isis, MobilePayments, mobilepostcross, payments, softcard, TMobile, Verizon
All products recommended by Engadget are selected by our editorial team, independent of our parent company. Some of our stories include affiliate links. If you buy something through one of these links, we may earn an affiliate commission.