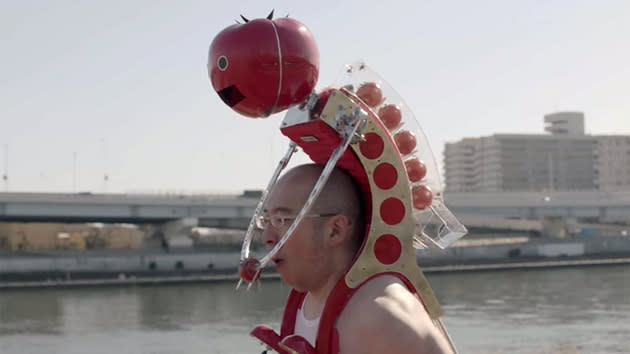 We might have a new winner for the "world's silliest wearable" award. Japanese juice vendor Kagome has teamed up with the mechanical artists at Maywa Denki to build Petit-Tomatan, a piggybacking robot that feeds you tomatoes (which reportedly help your "antioxidant power") while you're running. This goofy helper was meant as a publicity stunt for this weekend's Tokyo Marathon, but it's a fully fleshed-out device -- there's even a timer so that you don't clear out your nutritional supply too quickly. While you're likely never going to see any serious athletes donning contraptions like this, it does make the runner's old-school water bottle look a little outdated.

In this article: food, kagome, marathon, maywadenki, petit-tomatan, running, tokyomarathon, tomato, video, wearable
All products recommended by Engadget are selected by our editorial team, independent of our parent company. Some of our stories include affiliate links. If you buy something through one of these links, we may earn an affiliate commission.