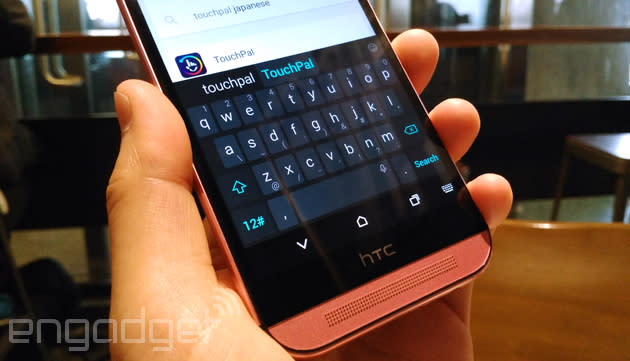 Tech-savvy users may have already come across TouchPal when trying different keyboards on Android and iOS 8 (and maybe even Windows 8), but it looks like a whole lot more people will be introduced to it soon. According to the Shanghai-based keyboard developer, HTC is replacing Nuance's Swype with TouchPal as its new default input engine on upcoming Android devices -- including the recently announced One M9 -- around the world (unless requested otherwise by operators). While HTC wouldn't officially comment on this, an internal source close to the matter verified TouchPal's announcement, though it didn't go into detail as to what prompted the move.

Prior to this announcement, TouchPal, founded in 2008, was already powering HTC's M8 series in China, as well as select devices from ZTE, Alcatel OneTouch, Gionee, Sony (both the Xperia Z3 and NEX smart cameras), Smartisan, Huawei, Xiaomi (for Hong Kong and Taiwan), Meizu and many more; thus taking up 18 percent of the Android smartphone market share as of mid-2014. Even the onboard entertainment system on Mercedes-Benz's S Class and E Class cars use TouchPal's keyboard engine.

While the award-winning TouchPal may not have had as much media coverage as the likes of Swype and SwiftKey, its latest keyboard app has 42 million daily active users (as of January 24th this year). Interestingly, about 31 percent of this lot comes from North America, 22 percent from Europe and 19 percent from China. TouchPal claims that its tech -- in the form of both the complete app and just the engine -- has been deployed on over 270 million devices worldwide, which is a little above SwiftKey's 250 million. Both are still miles away from Nuance's staggering claim of "more than 1 billion devices" thanks to Swype's long-running licensing model, but when it comes to downloads alone, the Google Play Store rankings picture a different reality.

As to why HTC decided to switch from Swype to his keyboard, TouchPal COO and Chief Architect Karl Zhang reckons it's to do with his company's better contextual prediction technology, support for over 90 languages and better back-end support. There's no doubt that Nuance isn't all too happy about this, especially given the complicated history between these two companies: Nuance actually offered to acquire TouchPal back in 2012, and after being rejected, the former then filed for an ITC Section 337 investigation to accuse TouchPal of patent infringement, but the judge ruled in favor of TouchPal the following year.

Not all is lost for Nuance, though, as it announced at MWC that it has now gained Acer as its latest client to preload Swype on all Android phones globally.

In this article: android, china, cootek, htc, input, inputmethod, keyboard, mobilepostcross, mwc2015, nuance, swiftkey, swype, touchpal
All products recommended by Engadget are selected by our editorial team, independent of our parent company. Some of our stories include affiliate links. If you buy something through one of these links, we may earn an affiliate commission.