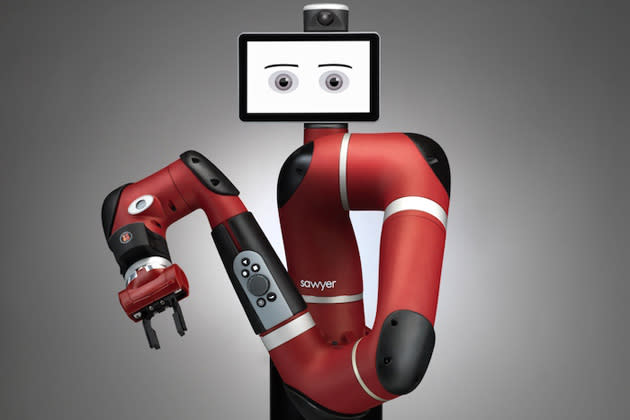 Picture a typical factory robot in your head and you'll probably see a cold, unsympathetic arm performing relatively simple tasks. You may want to shake that image soon, though. Rethink Robotics has taken the wraps off of Sawyer, a smaller sibling to its earlier Baxter model that's built for handling high-precision tasks that most machines can't tackle, such as testing circuit boards. The one-armed robot is designed to be as people-friendly as its predecessor, with a touchscreen for a face and software that lets you teach it by guiding it with your hands. The big improvements are in the arm itself. Sawyer is using new actuators and joints that make it smaller, faster and more precise, which should help with assembling or verifying lots of tiny parts.

You probably won't be buying Sawyer yourself, since it'll cost a hefty $29,000 when it ships in the summer. However, it could be a big deal in the electronics world, where manufacturers have been looking for ways to replace more overworked factory employees with automatons. Sawyer can not only handle duties that were once difficult for robots, but adapt to new challenges -- the combination of learn-by-doing code and force-sensing joints helps it deal with the imperfect conditions of assembly lines. There's a degree of irony to introducing a human-aware robot designed to replace humans, but that's fine if it means that more people can take jobs they'd actually like.

In this article: automation, factory, factoryrobot, machinelearning, rethinkrobotics, robot, robots, sawyer, video
All products recommended by Engadget are selected by our editorial team, independent of our parent company. Some of our stories include affiliate links. If you buy something through one of these links, we may earn an affiliate commission.