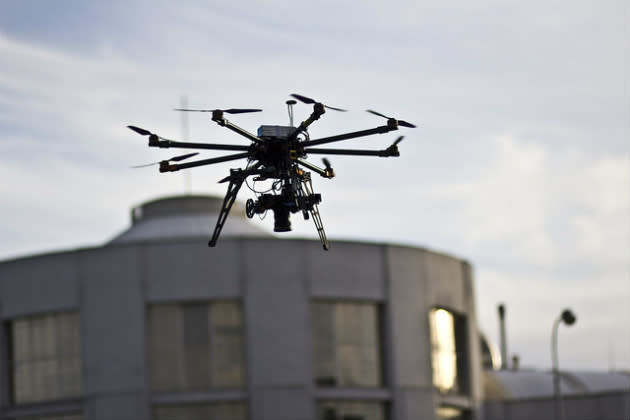 For police officers in the UK, it's time to fight fire with fire. Some sneaky Brits have been using drones to film football matches and smuggle contraband into prisons, so now the long arm of the law is recruiting some unmanned aerial vehicles (UAVs) of its own. The Sussex and Surrey Police force has been awarded almost £250,000 by the Home Office to buy five drones and investigate how they can assist officers in the field. UAVs are potentially faster than regular bobbies on the beat, and could be used to investigate smoky or otherwise hazardous conditions that would put officers' lives at risk. The force has suggested they could also be used to gather helpful aerial evidence, such as when a person is reported missing, or an armed incident occurs on the street.

Sussex and Surrey Police have experimented with drones before at Gatwick Airport. The technology was used for perimeter patrols and the force concluded that in some instances, it was a faster, safer and cheaper alternative to regular officers. With this latest trial, the force wants to look at broader use cases and ultimately advise other divisions that are considering drones of their own. Officers will also draw up a training scheme so that colleagues can be properly approved before flying their own unmanned robots.

The use of drones is bound to make some citizens uneasy, especially when the rules for recreational use are beginning to tighten. Police forces across the UK are also under pressure to cut costs, so UAVs could be an attractive option. Until they can intervene and make arrests though, they're unlikely to replace human officers anytime soon.

In this article: drone, drones, police, unmanned aerial vehicle, UnmannedAerialVehicle
All products recommended by Engadget are selected by our editorial team, independent of our parent company. Some of our stories include affiliate links. If you buy something through one of these links, we may earn an affiliate commission.