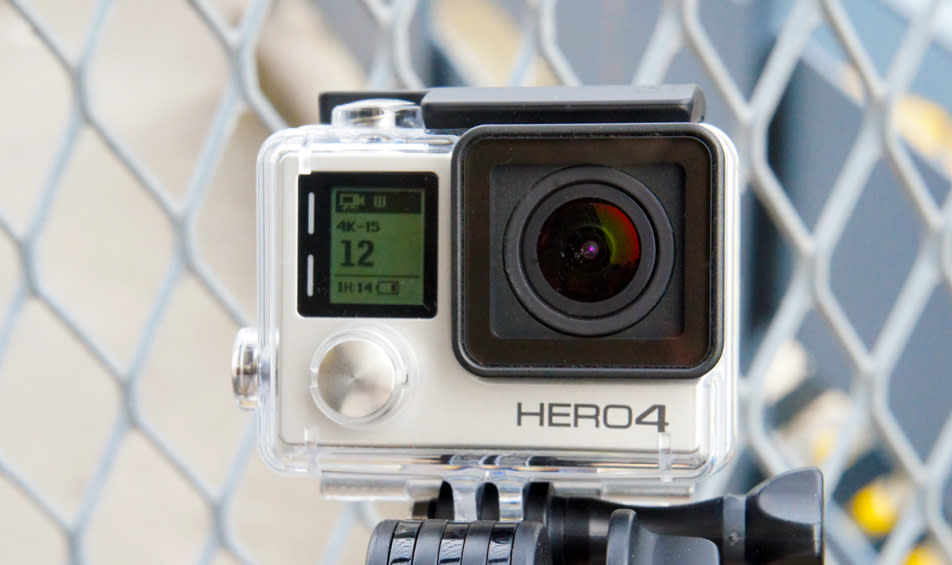 GoPro doesn't make square, cube-like cameras, but if it did, the picture (after the break) is probably what they'd look like. The image comes from a patent granted to GoPro today. The protection covers a "Camera housing for a square-profile camera," rather than a camera itself (makers of square cameras, your time to check is now). Sifting through the claims, the patent mentions how the square housing would allow a camera to be mounted in numerous orientations (thanks, geometry!) regardless of how you mount it. There are identical openings on three of the sides also, to provide access to ports (like you can with the current "Frame" mount) in any orientation. The camera in the drawings is for illustration purposes only, but shows a cube-shaped GoPro with a single button on top and a small, thin display beneath it. The patent also mentions dimensions between two to nine centimeters per side, giving a pretty broad scope of potential sizes. Most importantly, the housing part carries GoPro's proprietary three-pin connector, meaning it'd still be compatible with a great number of existing accessories.

A GoPro spokesperson made it clear to Engadget that there are no product announcements to be made at this time. However, the company did say its engineers conceptualized and began working on a square camera design in 2011. Today's patent grant would now protect the housing for any product that it had been working on since the original filing. That's plenty enough time to design a smaller, square camera for sure.

This is a crucial time for GoPro. The company went public last summer, and since then has faced ever increasing competition from both high end (Sony) and budget (Xiaomi) cameras. To stay ahead, GoPro has diversified into professional live broadcasting, and moved deeper into sports coverage, but cameras are still its main bread winner. In this article: actioncam, actioncamera, camera, cube, gopro, patent, square
All products recommended by Engadget are selected by our editorial team, independent of our parent company. Some of our stories include affiliate links. If you buy something through one of these links, we may earn an affiliate commission.