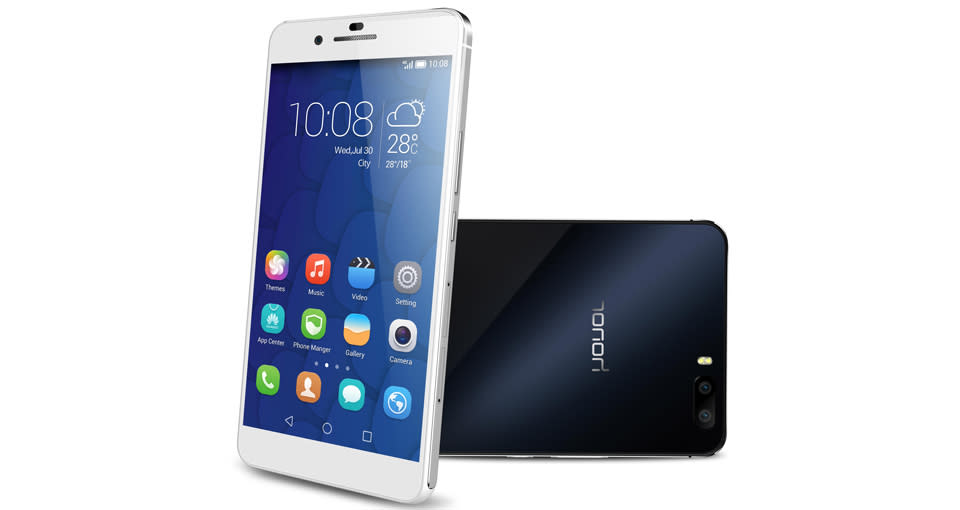 Chinese firm Huawei is no stranger to the UK. Unbeknownst to many, it's an important provider of cellular infrastructure, and just a couple of weeks ago, it held its new flagship smartphone launch in London. Over the years, some of Huawei's top handsets have been ranged by major UK carriers, but these days you're more likely to see its name attached to low-cost, pay-as-you-go devices. Towards the end of last year, Huawei debuted its Honor smartphone brand in the UK and Europe, hoping this range of reasonably priced devices would find success in these parts. Perhaps to its detriment, Huawei went to great lengths to mask its ownership of Honor, instead introducing the brand as a new, pro-consumer smartphone manufacturer. Employing an online-only sales model, however, meant the name slid quickly into obscurity, but that changes in the UK today with Honor's first carrier partnership since the brand launched just over six months ago. It's found a friend in Three, which has just added the Honor 6+ to its contract smartphone line-up. The handset is now available on contracts starting at £24 per month (with a £19 upfront payment), or for £300 on pay-as-you-go, which is the same price you'll pay for the device on Amazon. By far the most advanced smartphone in the Honor range thus far, the 6+ has a 5.5-inch, 1080p display, 3GB of RAM, a 1.8GHz octa-core processor, and several other components that deserve a respectful nod. The key selling point, however, is undoubtedly the handset's dual 8-megapixel cameras, which let you refocus and adjust the aperture of snaps after the fact, much like HTC's Duo Camera feature.

The success of the device is now in the hands of consumers, but Huawei is more than entitled to celebrate a victory already. Regardless of how the 6+ performs commercially, the Honor brand name is now out there, in the public consciousness. It's early days, of course, but with a presence in Three's online and bricks-and-mortar stores, Honor's gone mainstream. And that's sure to attract a few envious stares. The direct-to-consumer, online sales model is a risky one. Not only do companies like Karbonn, Blu et al. have to compete with each other, they have to compete in the UK market where consumers traditionally visit carriers when in search of a new handset. With limited marketing, these firms also have to hope that punters effectively stumble across their websites or Amazon listings.

Honor, however, has managed to break away from this peer group. Partnering with Three on the launch of the 6+ means the network provider now shoulders the responsibility of putting the device in front of consumers, and the Honor brand as a whole can only benefit from this increased exposure. Though Huawei distances itself from the Honor name, it undoubtedly had a hand in arranging the deal with Three that other online-only smartphone sellers can only hope to replicate. The launch of the Honor 6+ with a major carrier doesn't necessarily mean the brand is about to become a serious player in the UK, though. No question that would be the preferred outcome, but take a look at Alcatel. Plenty of its devices are and have been ranged by major UK carriers, but say that name in public, and we guarantee you'll be met by more than a few blank stares.

In this article: honor, honor6+, huaweihonor, huaweihonor6+, mobilepostcross, three
All products recommended by Engadget are selected by our editorial team, independent of our parent company. Some of our stories include affiliate links. If you buy something through one of these links, we may earn an affiliate commission.