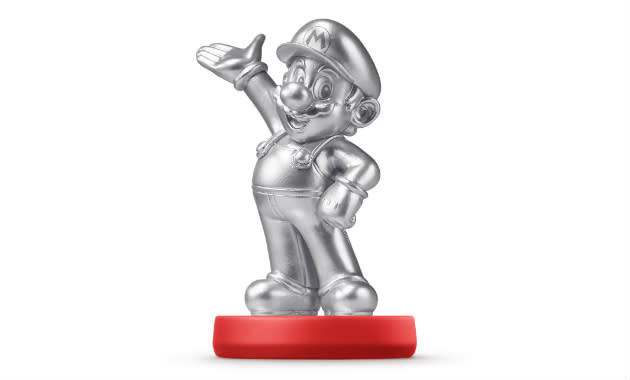 Nintendo has already released a gold version of its Mario Amiibo, so guess what's coming next? A silver version, of course. We suspected as much after both figurines leaked back in February, but today the console maker has made it official. The special statue -- which is identical to the Amiibo figure from Mario Party 10, albeit painted silver -- will arrive in stores on May 29th for $12.99. When the gold version debuted, it was available exclusively in Walmart stores across the US. That made it something of a collector's item, riling fans that were desperately trying to maintain a complete set. This time around, it seems Nintendo has opted for a more conventional release. The company is still struggling to keep up with the demand for Amiibos however, so if you're interested, act fast on May 29th.

In this article: Amiibo, gold, Mario, nintendo, SIlver amiibo, silver edition, Super Mario, walmart
All products recommended by Engadget are selected by our editorial team, independent of our parent company. Some of our stories include affiliate links. If you buy something through one of these links, we may earn an affiliate commission.