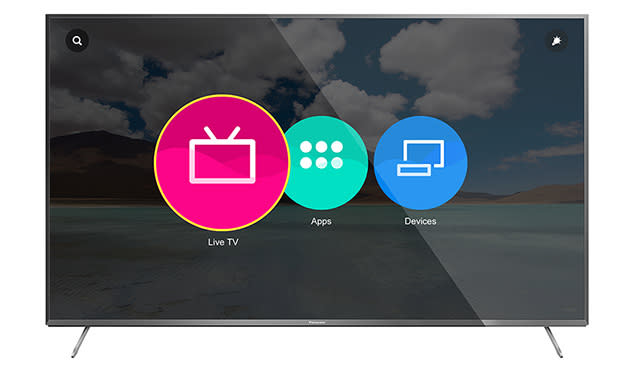 Panasonic lost some mystique when it stopped making those amazing plasma sets, but its new Firefox OS-powered 4K Smart TVs are showing a return to form. First revealed at CES this year, those sets are now available in Europe and will be rolling out to the US and elsewhere in the coming months. The Smart TV space has become crowded with players including Google's Android TV platform, Samsung's Tizen and Roku, to name just a few. However, Mozilla touts several unique advantages to its own platform, like plenty of HTML5 web apps including Netflix and Hulu, along with the ability to share content from any device with a Firefox browser.

New models include the curved 4K Viera 65-inch CR850 and 55-inch CR730, along with various flat 4K models in the CX series (pricing and models will vary by region, but we haven't seen any in shops yet). Along with the smart features, Panasonic has a new wide color phosphor "4K Studio Master" picture engine it says will deliver professional color accuracy thanks to 3D look-up tables (LUTs) used by film industry color pros. The CR models also sports HDR and 10-bit color capability for more subtle gradations between colors -- features that will be de rigeur for the fanciest new sets this year. Early previews are promising so far, but expect pricing to be pretty high -- though not 4K OLED high.

In this article: Firefox, FirefoxOS, hdpostcross, HDTV, Panasonic, SmartTV
All products recommended by Engadget are selected by our editorial team, independent of our parent company. Some of our stories include affiliate links. If you buy something through one of these links, we may earn an affiliate commission.