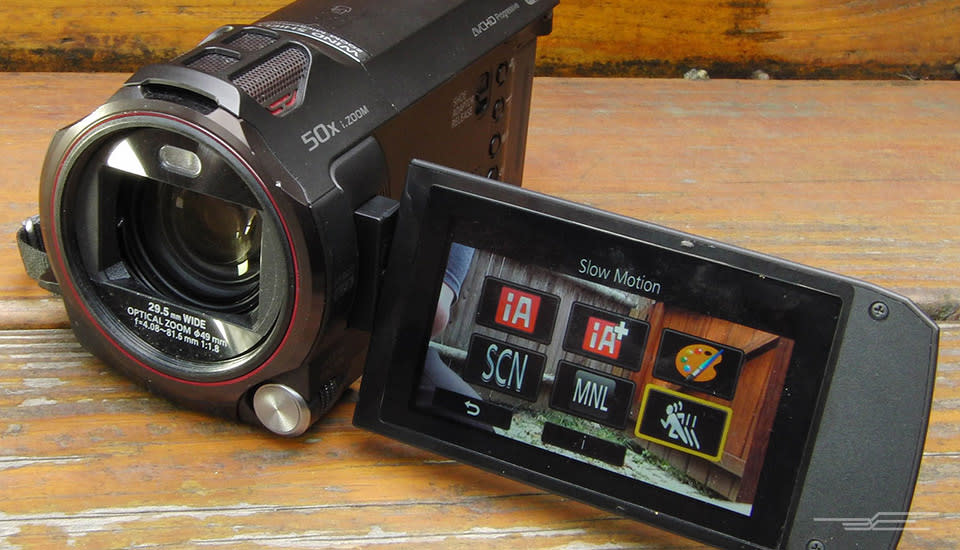 If you've ever tried to record your kids soccer game or music recital, you'll know that there are some settings where a smartphone just won't do the job. For shooting video from a field away, catching clips longer than 30 minutes, or shooting when the lights are low, what you need is a dedicated video camera. And for that, the camcorder we recommend for most people is the $550 Panasonic HC-V770K.

After more than 30 hours of research and testing over the course of two rounds of analysis, we found that it beats out any other camera in its price range: it captures video that has more detail, better color, and better sound than all cameras in a similar priceand even better than those that cost much more. It produced the sharpest footage in bright light, plus it had the best stabilization and the least noise in low light. It also featured the best touchscreen controls of the bunch and, with a long 20x optical zoom, you can capture the action from across a huge spacetry to do that with a smartphone. Although fewer people are buying dedicated camcorders these days, the video camera market still an array of different priced and featured models. In our research, we discovered that spending above $900 got you a professional or 4K model, which most average people don't actually need for their kids' piano recitals or soccer matches. Dipping much below an MSRP of $300 saw a major decline in video qualityespecially in low light. From this range of prices, we were able to skip models that are identical to less expensive versions except for adding features of dubious usefulnesslike internal hard drives, when it's cheaper just to use a large SD card, or Panasonic's recent introduction of a second camera that points at your face while you record.

Previously, we'd recommended the Panasonic V750K, but in 2015 Panasonic replaced it with the V770K, a model that's identical to its predecessor in almost every way. The only changes that we could ascertain are a switch from HDMI mini to HDMI micro and a new HDR video mode. Since the V770K has the same internals as the V750K, we knew that it would have the same test results. Which means the same performance in bright daylight for detail, color, and motion; while walking and zooming to account for stabilization; in dim light indoors, and in the middle of the night. The unchanged exterior meant the same high quality handling and ease of usebecause what good is a camcorder if you can't figure out how to use the thing? The Panasonic V770, like the V750 pictured here, has a large, easy to use touchscreen, and well laid out controls and ports.

Hands down, the $550 Panasonic HC-V770K is the best camcorder for most people if you want to spend less than $900. Under bright daylight, it will capture the sharpest detail and deepest, most saturated color, so that recording of your kid's first football game will capture every blade of grass. The identically specked V750K had the best stabilization system of all those we looked at, so when you're trying to track the action while zoomed in to a full 20x and shooting across the field, you won't see too many shudders and shakes.

It also holds up when recording in the dark, like shooting at night, or indoors with lights down low (school plays, anyone?) Compared to the other video cameras we tested it had the cleanest and sharpest footage, even when shooting in the middle of the night. And with an excellent audio system, you'll actually be able to make out what's being said onstage, rather than the whispered conversation in the audience in front of you (a common problem with smartphone footage). The physical control layout and range of ports available on last year's V750 are virtually identical to this year's V770.

Add in Wi-Fi, a slow motion recording mode, a two hour battery life (with an optional larger capacity battery for longer shooting), and the ability to squeeze 25 hours of footage on a 64GB SDXC card, and you have the best bet for most people.

If spending north of $500 seems a bit too rich for a camcorder, the Canon VIXIA HF R600 is often available for around the $250 mark. Compared to the Panasonic, its colors won't be as bright, the stabilization quite as smooth, and it'll struggles slightly in low light. But given that you can buy it for a remarkably low price most of the time, it's an excellent alternative. It'll still be notably better than your smartphone, and packs a 32x zoom, small size, and easy to use touchscreen.

Use what you've got The V770's stereo microphone provides excellent separation, and narrows down as you zoom to keep the audio matching the framing of the video.

Do you have an iPhone? A DSLR? A point-and-shoot? All of these have video modes, and might be enough for what you need. The advantage to a camcorder comes with having a long zoom (which smartphones don't), and the ability to record longer than 30 minutes at a time (which most cameras can't do). If you don't need those, try using the camera you already have.

As with TVs and monitors, the next big thing in camcorders is 4K video. But as of right now, they generally cost $900+, require some serious hardware to edit, need a high quality screen to watch, and all told, it isn't what most people need. Yet. But that might change over the next few years, so keep your eyes peeled.

If you want a camcorder that will record deep, bright colors; capture incredible detail; keep your shaky hands stable; and capture great looking footage even in low light, then the $550 Panasonic HC-V770K is the way to go.

This guide may have been updated. To see the current recommendation please go to TheWirecutter.com

In this article: Canon, CanonVIXIAHFR600, HC-V770K, HFR600, Panasonic, PanasonicHC-V770K, partner, syndicated, thewirecutter, VideoCamera, VIXIAHFR600, wirecutter
All products recommended by Engadget are selected by our editorial team, independent of our parent company. Some of our stories include affiliate links. If you buy something through one of these links, we may earn an affiliate commission.