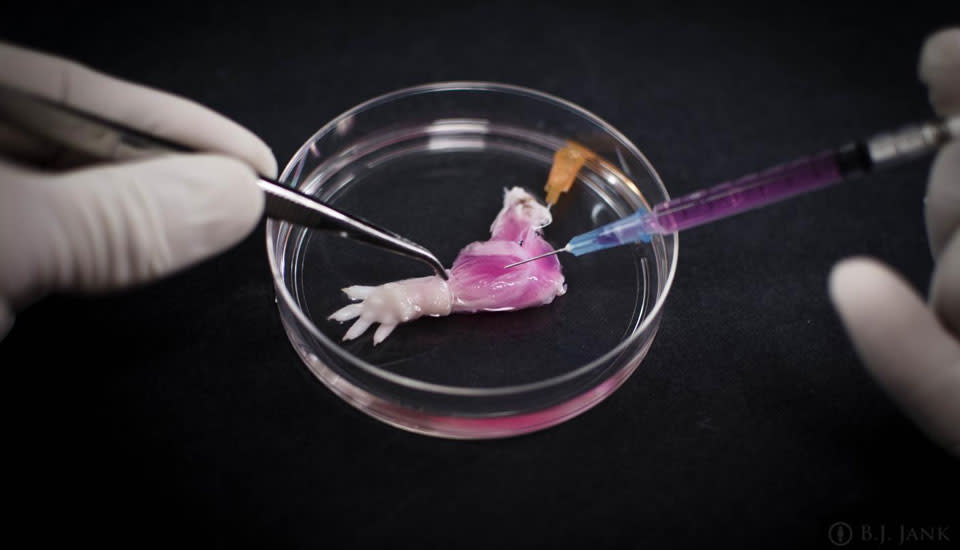 If the goal in medicine is to be able to repair people as if they were made out of Lego, then we just took a big stride towards that future. A team at Massachusetts General Hospital has managed to grow a rat's forearm that, theoretically, could open the door to whole-limb transplants. The team, led by organ regeneration expert Harold Ott used a technique called decel/recel, which has already been used to grow hearts, lungs and kidneys within the confines of a petri dish.

Rather than building a fresh arm, the decel/recel process requires scientists to decellularize organs from deceased donors. As New Scientist describes it, that means washing a forearm from a previously expired rodent until just the "scaffold" remains. It's a clumsy metaphor, but imagine that you could rinse off the mushy stuff until the biological equivalent of an ice cube tray remains. This empty receptacle retains the structure of the component with none of the icky bits.

After that, this "scaffold" is seeded with cells from the eventual recipient and nourished so that the cells grow themselves into a new body part. In this case, the team used the forearm of a deceased rat, washed it down, added some fresh cells and wired it up to a machine that kept its tissue alive. In under three weeks, blood vessels and muscles had built themselves across the structure, and the team just had to graft on some skin to complete the project.

One of the biggest issues in transplant science is that the human body tends to reject or fight a foreign body part that's implanted. Those who have received organ transplants are often consigned to a lifetime of immunosuppressant drugs so that their own self-defense system doesn't try to kill the thing that's keeping them alive. By using donor organs as a template for your own cells to regrow, the issues of rejection no longer apply. It's a similar effect to how Dutch scientists can now encourage rats to regrow blocked blood vessels around a dissolvable prosthesis.

Ott's team tested the limb it was able to grow with electrical impulses, and the forearm was able to flex and move. They then grafted it onto a living rat and found that blood flow would be accepted by the transplant, enabling the part to remain alive. Obviously, we could be decades away from a first successful operation on a test animal, let alone being able to pop down to the hospital to replace a lost limb, but it's very, very promising.

In this article: Biology, HaroldOtt, Limb, MassachusettsGeneralHospital, Medicine, MGH, Transplant, video
All products recommended by Engadget are selected by our editorial team, independent of our parent company. Some of our stories include affiliate links. If you buy something through one of these links, we may earn an affiliate commission.