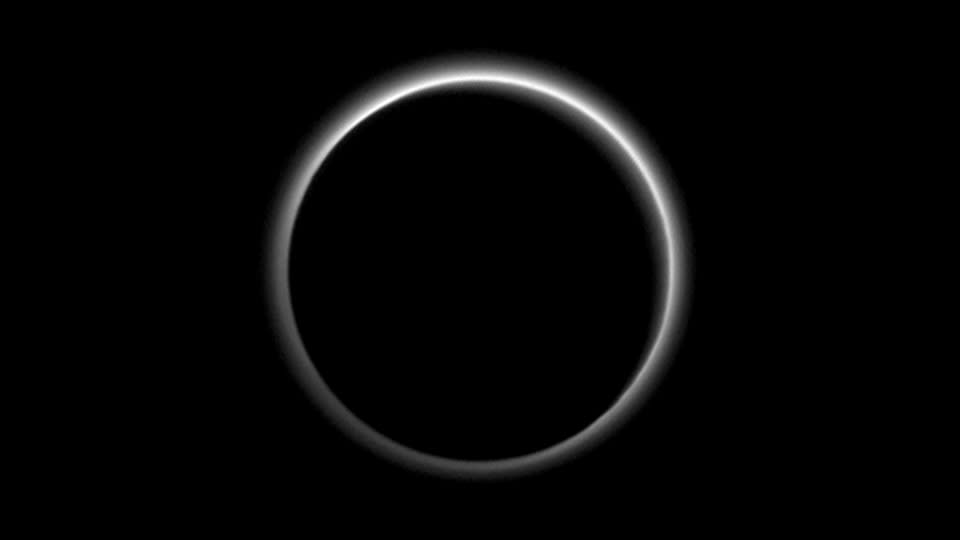 Ready for another dose of Pluto news? Of course you are! During an event today, NASA shared its latest discoveries in regards to the icy dwarf planet. First, detailed imagery from New Horizon's Long-Range Reconnaissance Imager (LORRI) shows "geologic activity" on the surface that includes flowing ice on a plain known as Sputnik Planum. That area lies in the western part of that massive heart-shaped region you've likely noticed in photos. NASA says the ice there flowed, and may still be flowing now, in a way that resembles the movement of glaciers on Earth. In the southern portion of Sputnik Planum, researchers discovered a range of icy mountains that rise about a mile and can be compared to the Appalachian Mountains here in the States. In fact, the peaks have been informally named Hillary Montes and are located near another range named Norgay Montes. The names are in honor of Sir Edmund Hillary and Tenzing Norgay -- explorers who first reached the summit of Mount Everest in the 1950s.

The still image you see above was taken by New Horizons after it finished its flyby of Pluto. Thanks to some help from the sun, the backlit photo shows two layers of atmospheric haze positioned at about 31 and 52 miles above the surface. What's causing the haze? Well, current models suggest that when ultraviolet light from the sun breaks apart methane, it causes hydrocarbon gases like ethylene and acetylene to build up. When those hydrocarbon gases fall toward the surface and condense, they form the haze. The haze is also the cause for some of the dark spots on the surface of Pluto that have appeared in the captured imagery.

Pluto's atmospheric pressure is actually lower than previous calculations indicated. Thanks to New Horizons' REX radio instrument, scientists now have "ground truth" to begin analysis of whether or not the planet is in the midst of "long-anticipated global change." While the early numbers are indeed helpful, the REX gear will be used to gather more info in the weeks to come. NASA also mentioned that the initial bevy of visuals would begin to slow down until September when we should see another set of new images arrive.

In this article: haze, ice, nasa, newhorizons, pluto, space, speaceexploration, timeline16plutomedia
All products recommended by Engadget are selected by our editorial team, independent of our parent company. Some of our stories include affiliate links. If you buy something through one of these links, we may earn an affiliate commission.