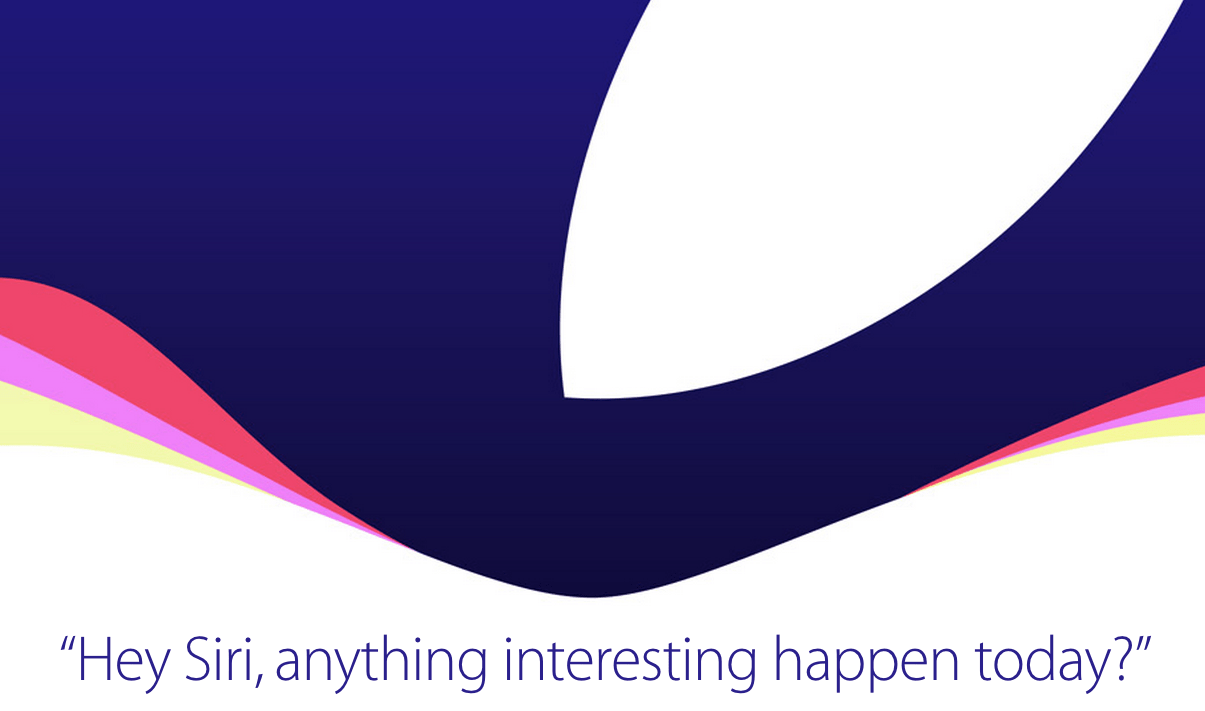 If today's big Apple event taught us one thing (beyond the fact that Tim Cook's music taste remains questionable at best), it's that the rumor mill has fully figured out Apple's game plan. If you've been paying attention to the news over the last few months (particularly if you've been reading 9to5Mac), there was almost nothing to be surprised by. The iPad Pro and iPad Mini 4 were unveiled; a new app-friendly Apple TV will be coming soon; and Apple's new iPhones are largely what we expected. That doesn't mean that there wasn't a ton of news jammed into today's two-hour event -- it's just that just about every bit of it was predicted ahead of time. Let's go through the announcements in detail and see exactly how the rumor-mongers stacked up. There wasn't much Apple Watch news expected at this event, and that mostly held true. The biggest news is that watchOS 2 will be released to consumers on September 16th. That update will bring new watch faces, a "time travel" feature that uses the digital crown to scroll the data on your watch face forward and -- most importantly -- the ability to run third-party apps natively. Third-party apps will also have the option to display little bites of info on your watch face, something Apple's built-in apps can do already. None of the features (aside from native applications) are going to fundamentally change the Watch experience, but it's good to see Apple tightening and improving its newest platform so quickly.

Apple also unveiled a host of new Watch bands, some of which we saw coming. There have been rumors about new Sport Bands coming for months now, and indeed there are now 16 different options to purchase (I'm pretty excited about the orange one, personally). There are also some slight changes to the traditional leather bands, though only eagle-eyed fans will probably notice the difference. Apple is also selling the super-slick Space Black stainless steel watch with a black sport band. Previously, you could only get that watch if you bought it with the expensive link bracelet, a combo that cost more than $1,000. Now, you can get the murdered-out look at a still-expensive, but more reasonable $550 price point. There were also some new fashion options that no one saw coming: The Apple Watch Sport is now available in gold and rose gold anodized aluminum, and Apple partnered with high-end fashion designer Hermès to produce three new leather bands for the Apple Watch. Given their pedigree, they're not cheap, ranging in price from $1,100 to $1,500 -- but they're also some of the nicest bands Apple has offered thus far. The rumor mill nailed this one. As expected, the iPad Pro was finally unveiled, and basically everything we expected was here. It's a 12.9-inch touchscreen device with an eye-popping screen resolution and some seriously powerful hardware on board (Apple says its A9X chip is faster than 80 percent of "portable computers" released in the last year). Apple also is making a keyboard cover and stylus called the Apple Pencil to go along with the device. Unfortunately, the guesses about the iPad Pro not quite being ready to ship were also on point: The biggest iPad yet will be available in stores this November.

Given the focus on the iPad Pro, the iPad Air 2 got no updates or price drops -- if you were holding out for a new version of the "traditional" iPad, you'll need to either deal with the Air 2 or keep waiting. The iPad Mini did get a long overdue update. Rumors pegged the iPad Mini 4 to basically feature the iPad Air 2's hardware inside a smaller body, and that was almost correct. Rather than including the A8X chip, Apple went with the A8. Otherwise, everything else (with the obvious exception of screen size) is identical to the Air 2. Last year's iPad Mini 3 was a seriously lame update, but this new model is the biggest update to the iPad Mini in nearly two years. Along with the iPad Pro, the new Apple TV was probably the biggest announcement that Apple made today -- but again, hardly anything was a surprise. From a hardware perspective, the new Apple TV looks nearly identical to its predecessor; it's a bit thicker, probably because of the significantly updated guts. Rather than the now-ancient A5 processor, the Apple TV features the A8 and either 32GB or 64GB of storage. That's quite a bit more storage than the rumor mills were expecting, and that's probably because the Apple TV is now a full-fledged citizen in the app marketplace.

Yes, the new tvOS software will feature a full App Store and iOS-style apps and games. That's a big change from the old Apple TV, which had a set of apps that mainly focused on video playback that was curated and pushed out by Apple. Now, you'll be able to download a variety of applications and games, some of which will be exclusive to the Apple TV, and use them with the new "Siri remote." That remote is a huge step forward from what came before -- it features a touchpad that will let you swipe and tap your way through the Apple TV interface. It also has a built-in gyroscope and accelerometer for game controls; Apple will also support third-party controllers for the first time for deeper game experiences. The other major change for Apple TV's software is its major reliance on Siri for searching. Rumors certainly alluded to this, but seeing it in action makes it clear how Apple's thinking about finding things to watch. Much like Siri in iOS, Siri for Apple TV is smart enough to parse commands like, "Show me new action movies," or, "Give me some suggestions for kid's shows." And now when you search for a particular show or movie, Apple TV will let you know what different services it's available on -- that way you won't accidentally rent something if you can just stream it on Netflix instead. Once again, the rumors mills got the iPhone 6s and 6s Plus exactly right, at least from a hardware perspective. The A9 processor, rose gold color, 3D Touch feature, 12-megapixel camera capable of shooting 4K video, 5-megapixel front-facing camera (with screen flash), paltry 16GB of storage at the low end and strengthened aluminum bodies were all called ahead of time. The replacement of the 5C with the 5S at the low end of Apple's lineup was also correctly predicted -- while rumors have swirled about an improved 4-inch iPhone, we'll have to wait another year for that.

To Apple's credit, seeing the phone in use was a lot more interesting than expected after all we heard about ahead of time. There weren't a lot of details about how exactly 3D Touch would be used beforehand, but it seems immediately useful and perhaps the biggest change to how we use our iPhones that's come along in years. A light press will give you a preview of your content, while a stronger press will take you directly into whatever that content is. There's also some great little "peeking" features that let you pull up interactions and info in your apps without having to dive right in. Seeing what third-party developers can do with this technology should be really exciting. The camera software was another point where Apple surprised us -- specifically Apple's new Live Photos feature. The iPhone has shot exemplary photos for years now, so it's no surprise that this year's model promises to be another step forward, but Live Photos were a surprising new addition. The iPhone 6s and 6s Plus will capture a few seconds of video and audio with every photo you shoot, and when you press down on the photo it'll show you what was captured. Those details will be viewable on other Apple products, as well. We haven't seen them in action yet, but it seems like a pretty fun new feature that doesn't require any effort. This was one of the most stuffed events Apple has done in a long time -- and that's saying a lot, considering how packed last year's iPhone/Watch event and this year's WWDC keynote were. And yet, we knew nearly everything that was coming ahead of time. It's getting easier all the time to get a sense of what Apple's yearly updates will look like, particularly the leaks that come in the weeks immediately preceding a big event. That's good news for those who don't want to wait for Apple's details to start planning their upgrade strategy -- but it's worth remembering that just because the rumors all came true this year, that doesn't mean the same thing will happen next time.

And there's always something to be said for having some surprises come Apple event day.

In this article: apple, appletv, applewatch, ipadpro, iphone2015, iphone6s, iphone6splus, mobilepostcross, rumorroundup
All products recommended by Engadget are selected by our editorial team, independent of our parent company. Some of our stories include affiliate links. If you buy something through one of these links, we may earn an affiliate commission.