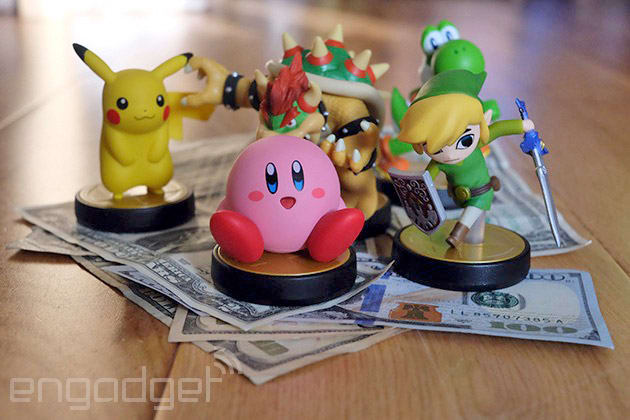 Nintendo's success is invariably tied to the strength of its hardware business. Wii U sales for the year totalled just 3.38 million, only 340,000 of which were sold in the latest quarter. Nintendo had predicted 3.6 million sales, missing its forecast by 220,000. 3DS sales, as alluded to earlier, were also weak. This time last year, Nintendo hoped to hit 12 million sales in 2014, later dropping that estimate to 9 million. It still didn't achieve that lower figure, moving 8.73 million over the year and just 1.7 million in the latest quarter.

Software is a mixed story. At the start of the year, Nintendo expected to sell 67 million 3DS games and 20 million Wii U games. It later adjusted that prediction to 61 million 3DS and 25 million Wii U software sales. What actually happened? Something in-between the two predictions, with almost 63 million 3DS games and 24.4 million Wii U games moved over the year. Looking at the bigger picture, Wii U titles sold better than initially expected, propping up a lack of demand for the 3DS and helping Nintendo eke out its slim profit. It's fair to say that the release of well-received fan favorites like Mario Kart 8 and Super Smash Bros. helped Nintendo considerably in this area.

So what's next for Nintendo? It's expecting to move fewer 3DS consoles and slightly more Wii Us, while software sales for both are predicted to be lower. That reflects the fact that, as far as we know, Nintendo doesn't have many big games coming out over the next year. The Wii U Zelda game was going to be the huge 2015 release, but it's now got a "TBD" in place of a release date, and looks set to miss this financial year entirely.

Nintendo hopes that middling sales figures, together with the expansion of the lucrative Amiibo toy line and a new partnership with mobile games specialist DeNA, will see it make a healthier $419 million operating profit next year. Nintendo has missed its expectations more regularly than it's hit them in recent years, but for the first time in a long while, the company at least seems realistic about what it can achieve until its next-gen console arrives.

Source: Nintendo (PDF)
In this article: 3ds, financial, nintendo, wii-u
All products recommended by Engadget are selected by our editorial team, independent of our parent company. Some of our stories include affiliate links. If you buy something through one of these links, we may earn an affiliate commission.