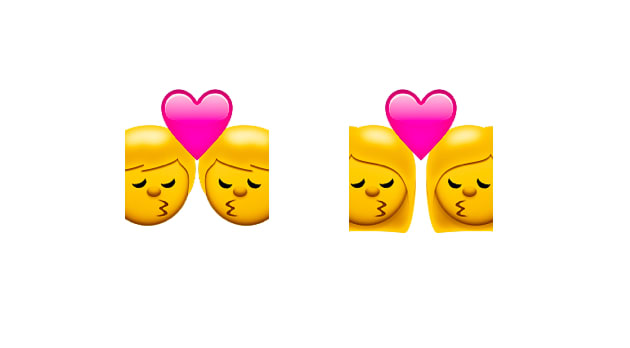 Vladimir Putin's Russia doesn't like Facebook and it doesn't care for gay people, and the government is now attempting to censor both of these things in one fell swoop. Mikhail Marchenko, a Russian senator in the upper house of parliament, has called for his government to investigate whether Facebook emojis depicting two boys and two girls kissing violates the country's 2013 ban on exposing "homosexual propaganda" to minors, Time reports. Russia's Roskomnadzor (The Federal Service For Supervision of Communication, Information Technology and Mass Media) is investigating Marchenko's concerns and is prepared to "take reactive measures," the site says.

Roskomnadzor has asked the Young Guard, Putin's main youth group, to form an "expert opinion" on the matter. In turn, Young Guard leader Denis Davydov says he will consult with professional psychologists to determine whether these emojis carry propaganda, according to Time.

There's no word if Russia takes issue with similar emojis on Twitter or other prominent social networks. The Russian government is particularly miffed at Facebook right now, after one of Putin's aides was censored on the website when he used an ethnic slur for Ukranians on his personal page. Meanwhile, Roskomnadzor is believed to have shut down more than 10,000 websites, threatened meme creators and censored social media pages. In 2014, it passed a restrictive blogger registration law that ultimately pushed Google and Intel out of the country. Where's the love, Russia?

Source: Time
In this article: emoji, emoticons, facebook, gay, homosexuality, kissing, Putin, russia, VladimirPutin
All products recommended by Engadget are selected by our editorial team, independent of our parent company. Some of our stories include affiliate links. If you buy something through one of these links, we may earn an affiliate commission.