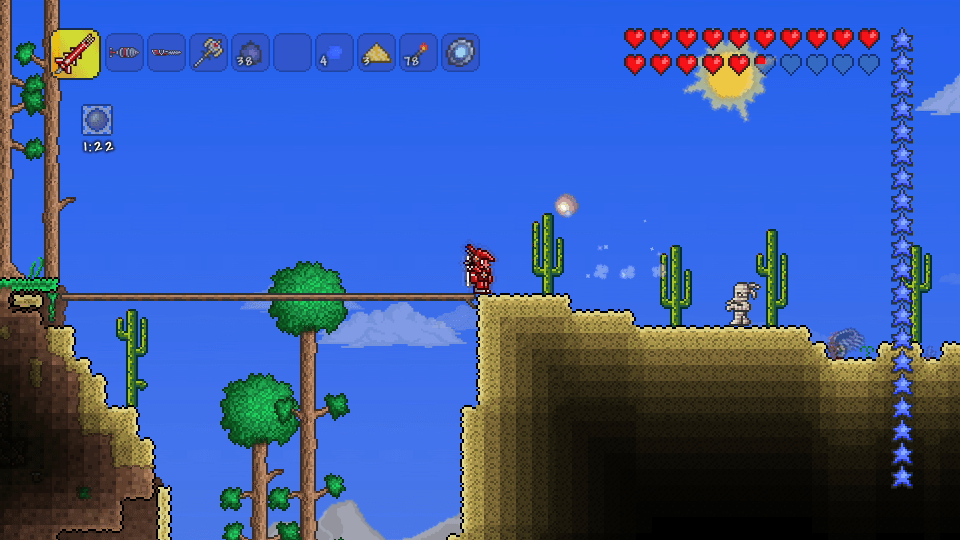 Terraria, the 2D sandbox action-adventure title that made its debut on PC in 2011, is ready for another frontier. Today, 505 Games and Re-Logic announced the wildly popular game is coming to Wii U June 28th in North America and June 24th in Europe.

It's almost like Minecraft in 2D, with charming throwback graphics. Like Minecraft, it's also enjoyed its share of tie-in merchandise like figures, novels, and trinkets outside the gaming world. Players explore randomly generated pixel worlds while crafting special items, fighting off enemies, and blazing a path for themselves.

The Wii U version of Terraria has been given a touch-friendly makeover. Instead of having to deal with the mouse or a controller you can now draw structures direct from the Gamepad via stylus. If you're worried about striking it out alone, it comes with four-player multiplayer co-op and eight-player online multiplayer complete with achievements via Miiverse. When you're trying to survive the night and blaze a trail for yourself within this game, the more friends you can depend on, the better.

The varying environments, enemies, and crafting materials are largely the same as previous releases, but there's plenty of content to keep you busy here. If you didn't check it out during its run through PC and various console releases, it sounds like it's worth checking out even if only for the touch screen implementation.

In this article: 505Games, av, gaming, terraria, WiiU
All products recommended by Engadget are selected by our editorial team, independent of our parent company. Some of our stories include affiliate links. If you buy something through one of these links, we may earn an affiliate commission.