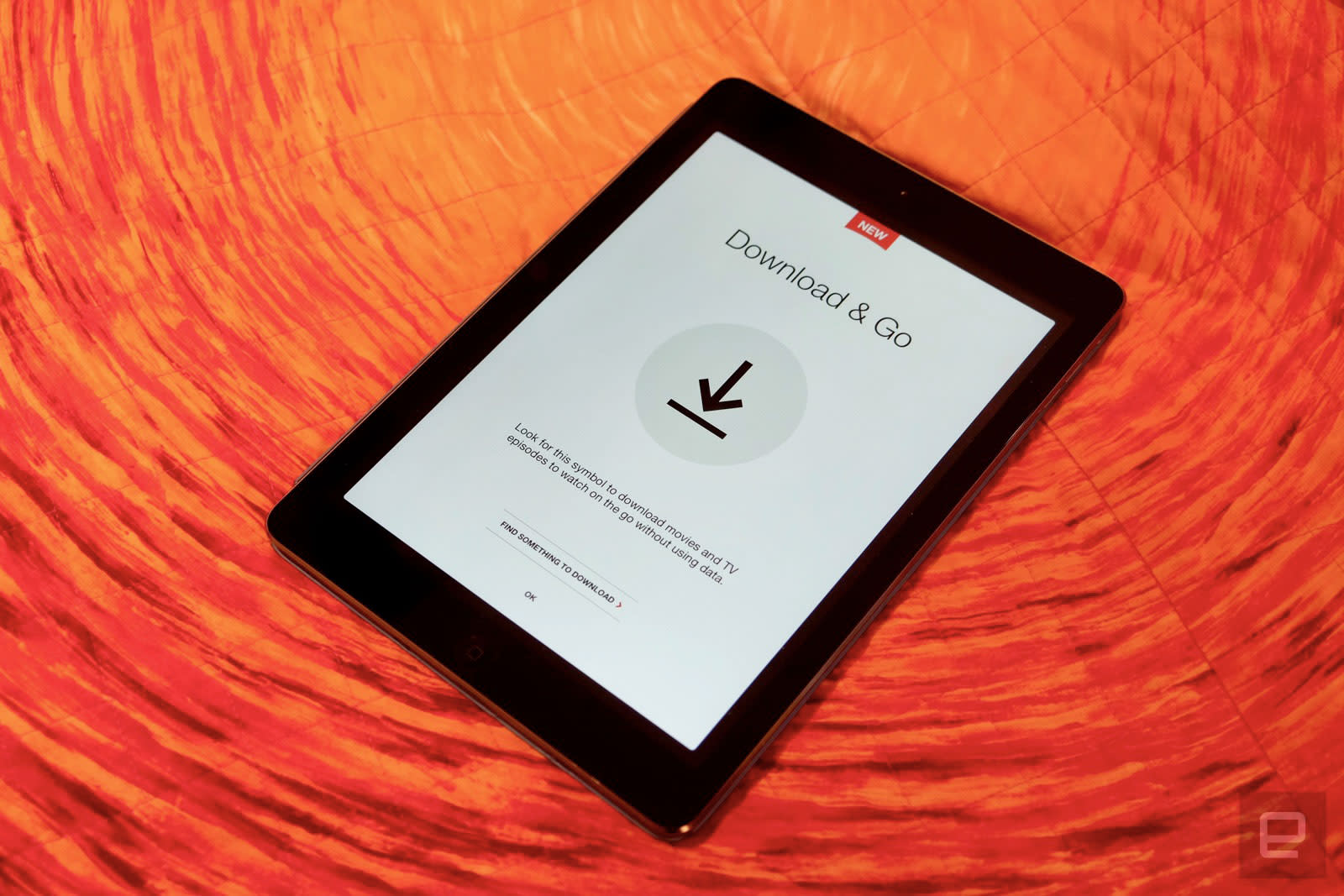 Netflix has long said that it had no intention of ever offering an offline playback mode for when you're stuck on an airplane or anywhere else with no internet connection. But it seems like the company is changing course: An enigmatic tweet from the Netflix account says that "your favorite stories are now available for download any time." It's accompanied by a cute video with scenes from a bunch of Netflix original shows, but it seems as if the feature won't be limited to only the company's original content. Regardless of any catches, the message is clear: Netflix will finally let us save shows to watch when we don't have an internet connection.

In a press release that just dropped, Netflix says that the feature will arrive later today in an app update for iOS and Android. The feature is pretty straightforward -- when a show or movie is available to save offline, you'll see a little "download" button. Netflix notes that many of its big shows, including Orange is The New Black, Narcos and The Crown, are available to download today. Notably, those are all Netflix original shows -- we're not sure if things from other studios will be made available just yet. And it most definitely seems like the entire catalog will not be made available all at once -- but this is still a pretty big deal considering Netflix consistently rejected this feature in the past.

Oddly enough, Netflix publicly pondered offline playback pretty recently, but pitched it as a way to make the product more appealing in developing markets where the internet infrastructure doesn't allow for continuous streaming like most of us in the US can experience. It's probably a good idea not to restrict a feature that so many customers have been asking for, and that its competitor Amazon Prime has offered for years.

Update: the iOS app is live (Android too!), and so we've gotten a chance to see just what's available. Netflix helpfully groups all of the offline content in a tab so you can see exactly what you can download. And it's a mix of originals and content from other sources -- a bunch of NBC shows including Parks and Recreation, The Office and 30 Rock are available, as well as movies including Boyhood, Dazed and Confused, Minions and many others. Obviously, we haven't had a chance to dig through the catalog too much just yet, but rest assured that there is plenty of high-profile content you can save in offline mode.

Netflix also says that regardless of what plan you're using, you'll be able to use the download feature -- it's good to see they aren't using this as a way to upsell people to its higher-priced plans. The one catch we've discovered thus far is quality. The default "standard" quality mode appears to be a pretty low-resolution mode, and bumping it up to "higher" quality still doesn't make video download at the highest resolution available. Streams still definitely look better -- but this will be less of a problem for those watching on a phone. If you're on a tablet with a high-resolution display, however, be aware that things won't look quite as sharp as usual.

In this article: av, caching, downloads, entertainment, internetvideo, netflix, netflixoffline, offline, services, subscription
All products recommended by Engadget are selected by our editorial team, independent of our parent company. Some of our stories include affiliate links. If you buy something through one of these links, we may earn an affiliate commission.