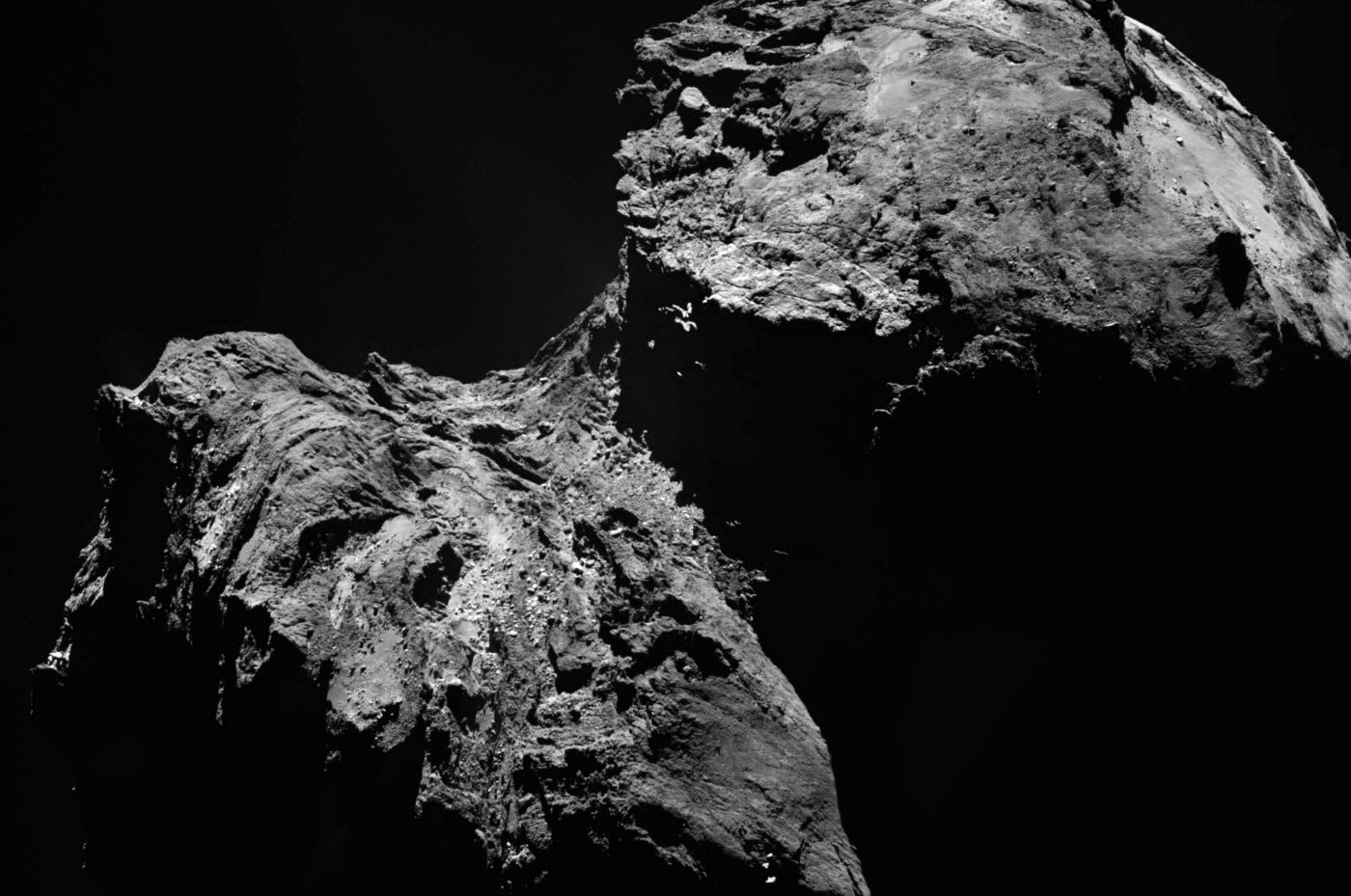 Farewell, young spacecraft. The European Space Agency's Rosetta probe has been surveying Comet 67P (or Churyumov-Gerasimenko) for the past 12 years, and on September 30th it will crash into the space rock and end its mission. Rosetta is nearing the orbit of Jupiter, which means it's running short on solar power and bandwidth required to downlink necessary data.

We knew this day was coming. In 2011, Rosetta was placed in hibernation mode for 31 months as it traveled to the most distant part of its journey, but in 2014, the ESA discarded attempting another, even longer, hibernation. The probe is currently riding alongside the comet, whose maximum distance from the sun, 850 million km, is farther than Rosetta has ever traveled before. The spacecraft lacks sufficient power to guarantee its heaters would be warm enough to ensure its survival.

On its way down, Rosetta will be able to take once-in-a-lifetime measurements, including high-resolution imaging and other close-up data, the ESA says. Most recently, Rosetta discovered the amino acid glycine, a crucial building block of life, in the dust surrounding Comet 67P.

"We're trying to squeeze as many observations in as possible before we run out of solar power," ESA Rosetta project scientist Matt Taylor says. "September 30th will mark the end of spacecraft operations, but the beginning of the phase where the full focus of the teams will be on science. That is what the Rosetta mission was launched for and we have years of work ahead of us, thoroughly analyzing its data."

Rosetta follows its companion probe, Philae, onto the comet's surface. Philae successfully touched down on Comet 67P in 2014, a first for humankind. After a rough landing, Philae collected important information about the comet's surface and structure, including its potential to support life. The European ground crew routinely lost contact with Philae after its landing, and German space agency DLR officially ended communication attempts with the probe in February of this year.

Landing Rosetta will be tricky, with the first changes to its trajectory coming in August. Scientists are still figuring out the best location to set down Rosetta, but the descent is planned to hit just 50 cm/s, about half of Philae's landing speed.

"Planning this phase is in fact far more complex than it was for Philae's landing," ESA Rosetta spacecraft operations manager Sylvain Lodiot says. "The last six weeks will be particularly challenging as we fly eccentric orbits around the comet -- in many ways this will be even riskier than the final descent itself."

Source: ESA
In this article: Churyumov-Gerasimenko, comet, comet67p, esa, EuropeanSpaceAgency, philae, probe, Rosetta, science, space, spacecraft
All products recommended by Engadget are selected by our editorial team, independent of our parent company. Some of our stories include affiliate links. If you buy something through one of these links, we may earn an affiliate commission.