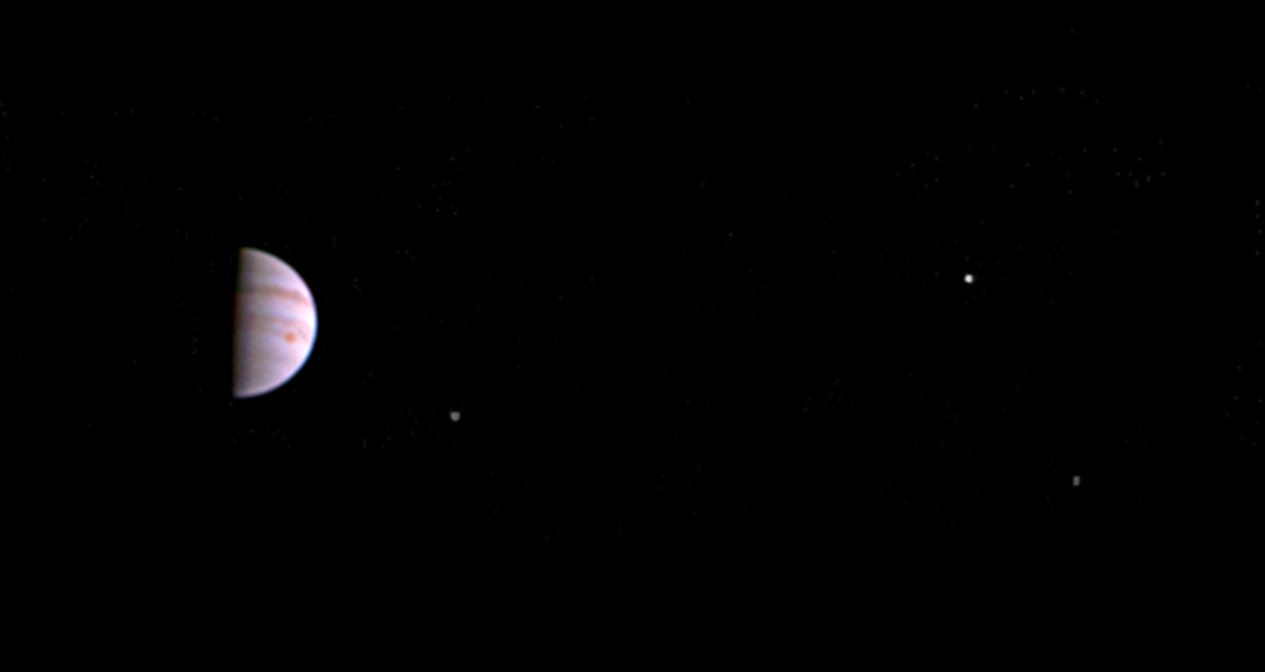 With Jupiter being some 365 million miles from Earth at its closest point, it can take awhile to send information from beyond the asteroid belt and back to Earth. On July 10th, just six days after arriving in Jupiter's orbit, NASA flipped on Juno's main visible light camera "JunoCam" and started snapping pictures. Now, just a couple days later, and we've got JunoCam's first shots of the largest planet in the solar system.

The shot above is a something like a proof-of-life photo, indicating Juno made it through the planet's extreme radiation zone unharmed. At the time, the spacecraft was still 2.7 million miles away from the planet and just beginning its 53.5 day orbit, but these early images show distinct features like the infamous Great Red Spot and three of Jupiter's largest moons -- (left to right) Io, Europa and Ganymede*. Over the next 20 months, Juno will circle the planet 37 times taking photos of the planet's poles and dramatic auroras. According to NASA, on its closest passes Juno will be about 2,600 miles above the planet, allowing it to probe beneath the cloud cover to "learn more about the planet's origins, structure, atmosphere and magnetosphere."

While this first image is a little fuzzy, NASA says high-resolution images are still a few weeks away. In the meantime, the spacecraft also captured a timelapse video of Jupiter's moons over a two-week period in June, starting from about 10 million miles from the planet and ending about 3 million miles away:

*In a fun piece of cosmic trivia, Jupiter's moons are all named after the Roman god's lovers and mistresses. The spacecraft, meanwhile was named after Jupiter's wife. Thus: NASA sent Jupiter's wife to check up on Jupiter and his lovers.

Source: NASA
In this article: juno, jupiter, nasa, science, space
All products recommended by Engadget are selected by our editorial team, independent of our parent company. Some of our stories include affiliate links. If you buy something through one of these links, we may earn an affiliate commission.