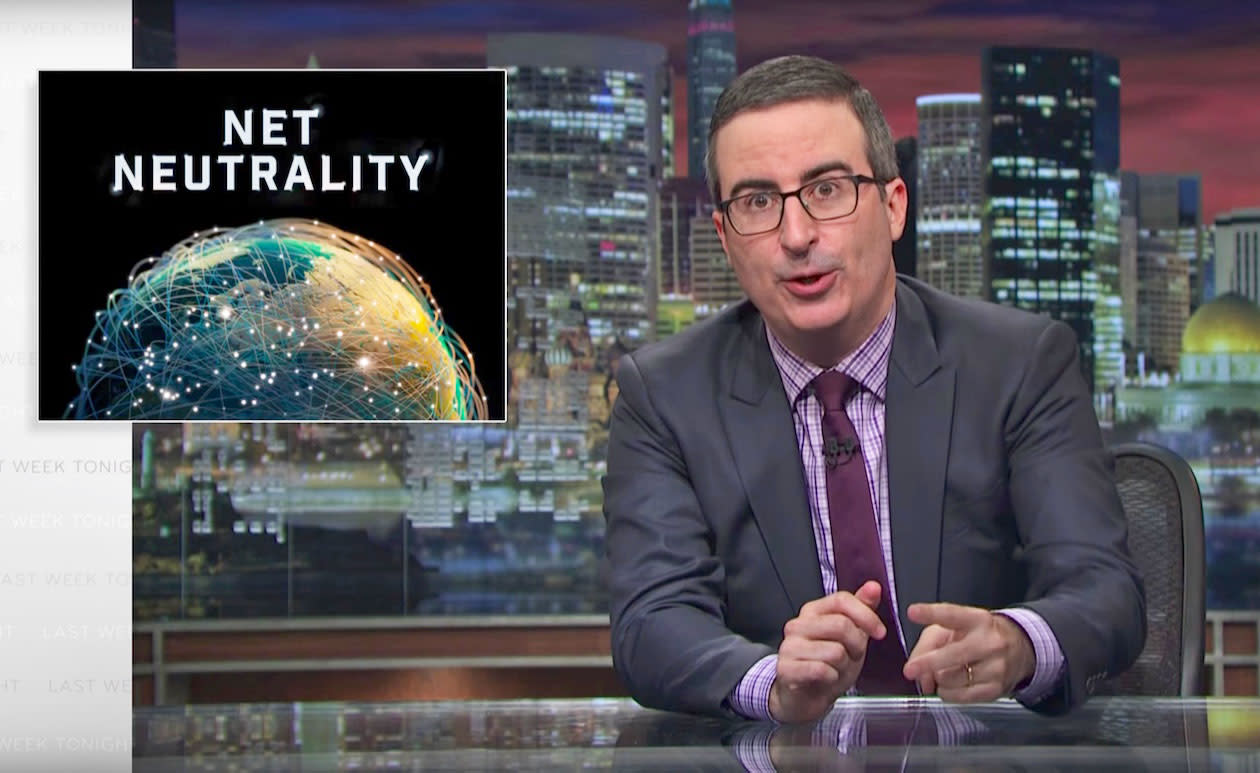 Sunday night, John Oliver merely pointed out a problem (again), and the results were pretty predictable if you're familiar with the last time he did similar. The most recent episode of HBO's Last Week Tonight's main segment concerns net neutrality and all the ways Federal Communications Commission chairman Ajit Pai has tried explaining that it's a frivolous concept -- sentiments echoed by senator Ted Cruz and others in a recent Washington Post op-ed. Well, as a result of Oliver setting up a URL that makes it incredibly easy to express your interest in maintaining an open internet to the FCC, parts of the regulatory body's website have been crippled under the server load.

Page loads for GoFCCYourself.com are lethargic, but sections of the FCC website that Oliver's custom URL doesn't point to seem to be running normally. It's just the comment page for the net neutrality case that's been struggling under the sudden influx of traffic here. The reason for the redirect in the first place? As Oliver illustrates in the video below, finding the actual page to tell former Verizon lawyer Pai and his compatriots that an open internet is deeply important to you was extremely convoluted.

As you can imagine, this isn't the type of thing that'd reside on the FCC's (currently) functioning homepage. Getting to the comment section involves finding the comment page, knowing the proceeding number and then realizing that the resulting link with "+ Express" means that's where you go to register your feelings on the issue. GoFCCYourself sidesteps all that and takes you directly to the comment page. It's pretty handy, which probably at least partly explains why the site is experiencing so many issues at the moment.

Unlike the last time this happened, the FCC has yet to tweet about the page's non-responsiveness so we've reached out for more information and will update this post should it arrive. Something tells us the organization has its hands full with other problems this morning, so maybe we shouldn't hold our breath waiting for a comment.

Update: The FCC has responded with the following comment from chief information officer Dr. David Bray, saying that the comment page was hit by multiple distributed denial-of-service attacks:

"Beginning on Sunday night at midnight, our analysis reveals that the FCC was subject to multiple distributed denial-of-service attacks (DDos). These were deliberate attempts by external actors to bombard the FCC's comment system with a high amount of traffic to our commercial cloud host. These actors were not attempting to file comments themselves; rather they made it difficult for legitimate commenters to access and file with the FCC.

While the comment system remained up and running the entire time, these DDoS events tied up the servers and prevented them from responding to people attempting to submit comments. We have worked with our commercial partners to address this situation and will continue to monitor developments going forward."

In this article: ajitpai, business, fcc, gear, gofccyourself, internet, lastweektonight, netneutrality, regulation, title1, title2, verizon, video
All products recommended by Engadget are selected by our editorial team, independent of our parent company. Some of our stories include affiliate links. If you buy something through one of these links, we may earn an affiliate commission.