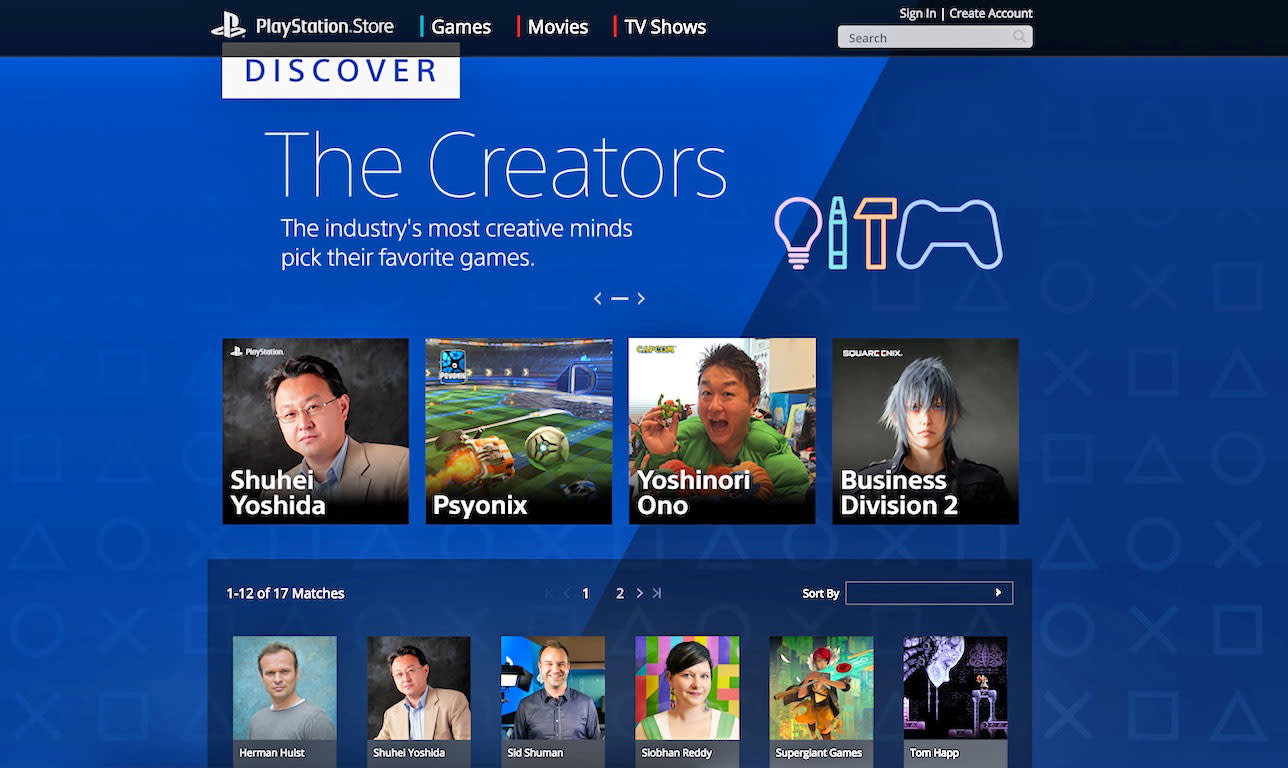 Four years on and the PlayStation 4's digital storefront is pretty well stocked. But finding more obscure stuff to buy isn't the easiest and the search function kind of sucks. As a way of addressing that on the store's web version, Sony is introducing curated lists of games from "the industry's most creative minds," dubbed The Creators. PlayStation's head of worldwide studios Shuhei Yoshida has his picks listed, as does Rocket League studio Psyonix, Street Fighter's Yoshinori Ono and the Final Fantasy XV team among many, many others.

Like Kotaku notes, there are a lot of repeated games among the lists and self-love from studios here. Guerilla Games' Herman Hulst is probably contractually obligated to have (the excellent) Horizon: Zero Dawn in his picks, for example, but he also lists the criminally underrated Until Dawn as well. Maybe he just likes games with "dawn" in their titles, who knows.

Where it gets interesting is seeing what indie developers chose. Tom Happ of Axiom Verge fame naturally pulled a few Metroidvania titles like Shadow Complex Remastered and Guacamelee! -- the former being the modern game that kicked off the genre's renaissance. Capy went all in on 2D games with its own Super Time Force Ultra in addition to picking Shovel Knight: Treasure Trove, Broforce and TowerFall Ascension.

It'd be great if this wasn't just a one-off version of previous lists, and instead became more of a flavor of the week style curation that'd highlight the PS Store's hidden gems -- especially considering just how cluttered the marketplace is.

Will this come to the console version, you know, where people are more likely to peruse the store? That isn't clear, but we've reached out to Sony for more information and will update this post should it arrive.

Update: A Sony spokesperson responded and said that this will indeed be an ongoing thing, but that there isn't "a firmly established schedule" yet for when the list will refresh.

In this article: applenews, capy, capybaragames, digitaldistribution, gaming, guerillagames, horizonzerodawn, internet, playstation, playstation4, playstationstore, ps4, shuheiyoshida, sony, tomhapp, yoshinoriono
All products recommended by Engadget are selected by our editorial team, independent of our parent company. Some of our stories include affiliate links. If you buy something through one of these links, we may earn an affiliate commission.