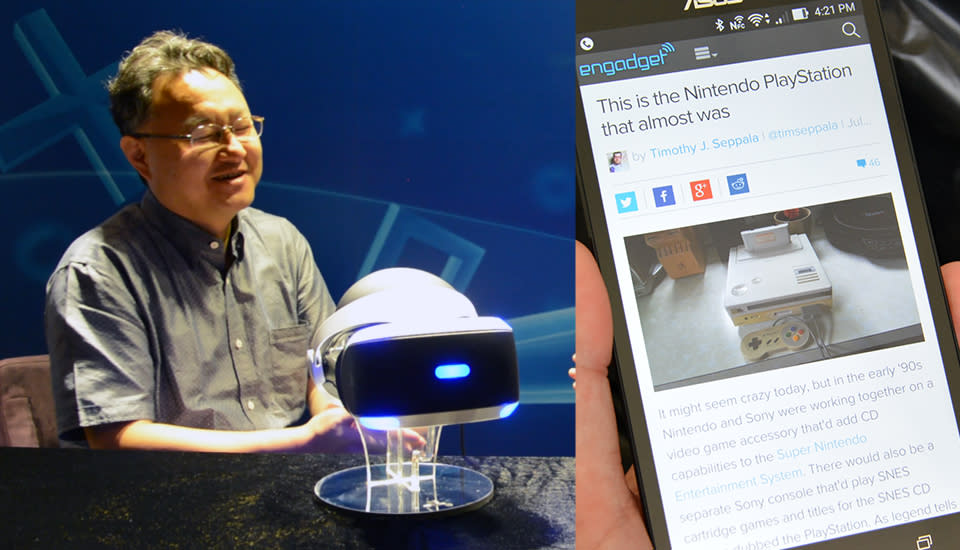 Not long after our last intimate chat with Shuhei Yoshida, the President of Sony Computer Entertainment's Worldwide Studios at E3, a Redditor managed to dig up a prototype of the never-released "Nintendo PlayStation" that eventually led to the birth of Sony's very own gaming console. Naturally, when we caught up with Shuhei-san again at a Project Morpheus event in Hong Kong, we showed him our article on the priceless gem and asked for his thoughts. After some reminiscent giggles, the exec gave a brief account on the time he spent with a device with matching description, as you can see in our interview video after the break.

"When I joined Ken Kutaragi's team [in 1993], there was a system called 'Play Station' that had both Super Nintendo cartridge support and some disc game support. Actually, I played some games [on it] as well."

It's worth pointing out that Shuhei joined Sony back in 1986, which was five years before Kutaragi's division unveiled -- and pretty much instantly canned -- the SNES-CD add-on.

Alas, the exec made it very clear that he couldn't confirm whether the recently surfaced "Nintendo PlayStation" device was legit, but he did give a cool reason.

"Somehow, I think it's more fun to keep it kind of a mystery."

In this article: console, featured, features, gaming, interview, nintendo, shuheiyoshida, Shure, sony, video
All products recommended by Engadget are selected by our editorial team, independent of our parent company. Some of our stories include affiliate links. If you buy something through one of these links, we may earn an affiliate commission.