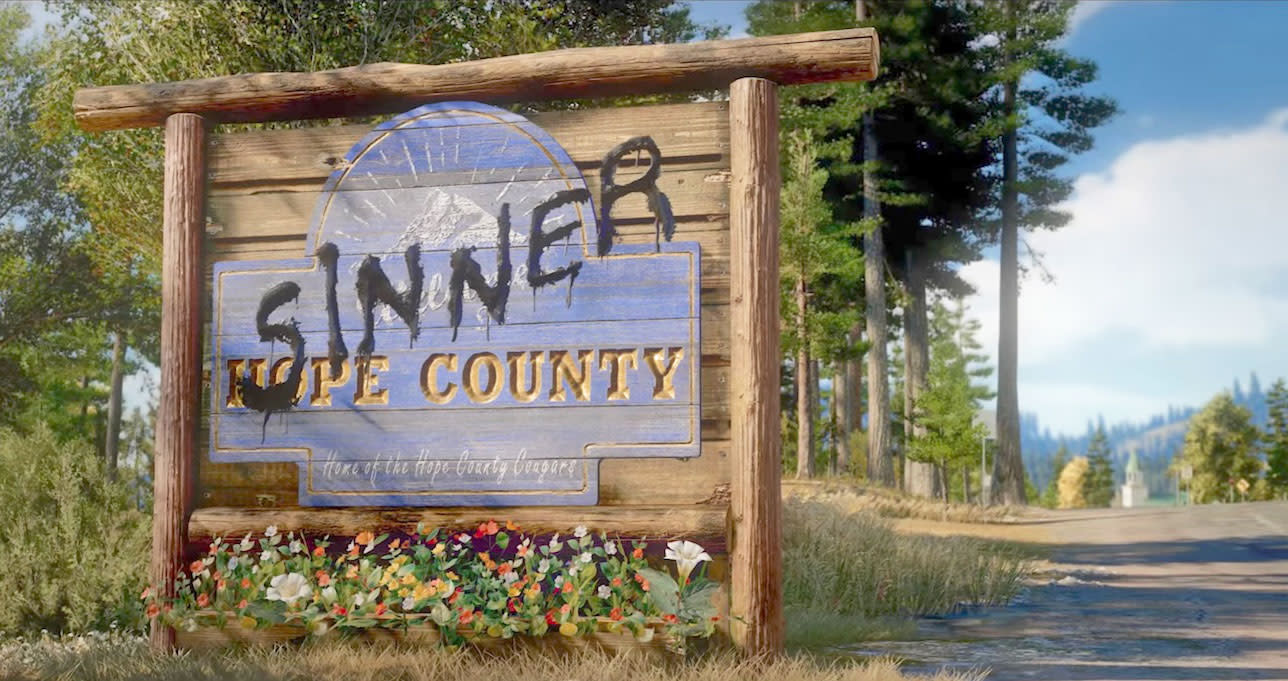 Far Cry 5 is going to be a little different than you might expect. The new announcement trailer paints a picture of pastoral life that lends itself surprisingly well to the franchise's familiar trappings: hunting, off-road vehicles, airplanes and guns. And it seemingly wraps it all together in a way that seems like a more grounded version of Grand Theft Auto V's depiction of a rural life of crime.

As hinted at by the cover art reveal, religion plays a big role here as well. The Eden's Gate cult is terrorizing the local community under the guise of saving the residents' souls. Naturally that involves forced baptisms/drownings while also holding what looks like a bible and keeping someone on their knees by waving a rifle in their face. You know, light narrative fare.

The development team spent a few weeks in Montana doing on-site research and also studied religious cults in an attempt to depict them correctly, the PlayStation Blog notes. Rather than focus on one central villain as in games past, the idea here was to build a realistic framework around Joseph Seed, the leader of Eden's Gate.

"We look back at some of the characters that we've created before, and we've had those key moments where you sit down with them, and you look at them eye to eye," says creative director Dan Hay. "But we kind of did it with one character at a time, and each game was a face-off. This time, we thought it'd be really interesting if we created a cast of characters like that."

So, there's Jacob the head of security; John, a lawyer who advances the cult's public presence and Faith who "keeps the cult's members pacified."

Ubisoft promises that there will be more revealed during its E3 media briefing on June 12th, but if you're curious for more before then, there's plenty of info tucked away on the game's official website.

The trailer says that this was captured from in-engine footage, but maybe don't expect actual gameplay visuals to look exactly like this next February 27th on your PC, PlayStation 4 or Xbox One.

In this article: applenews, av, cult, e32017, farcry, farcry5, gaming, pc, pcgaming, playstation, playstation4, ps4, religion, ubisoft, uplay, xbox, xboxone
All products recommended by Engadget are selected by our editorial team, independent of our parent company. Some of our stories include affiliate links. If you buy something through one of these links, we may earn an affiliate commission.