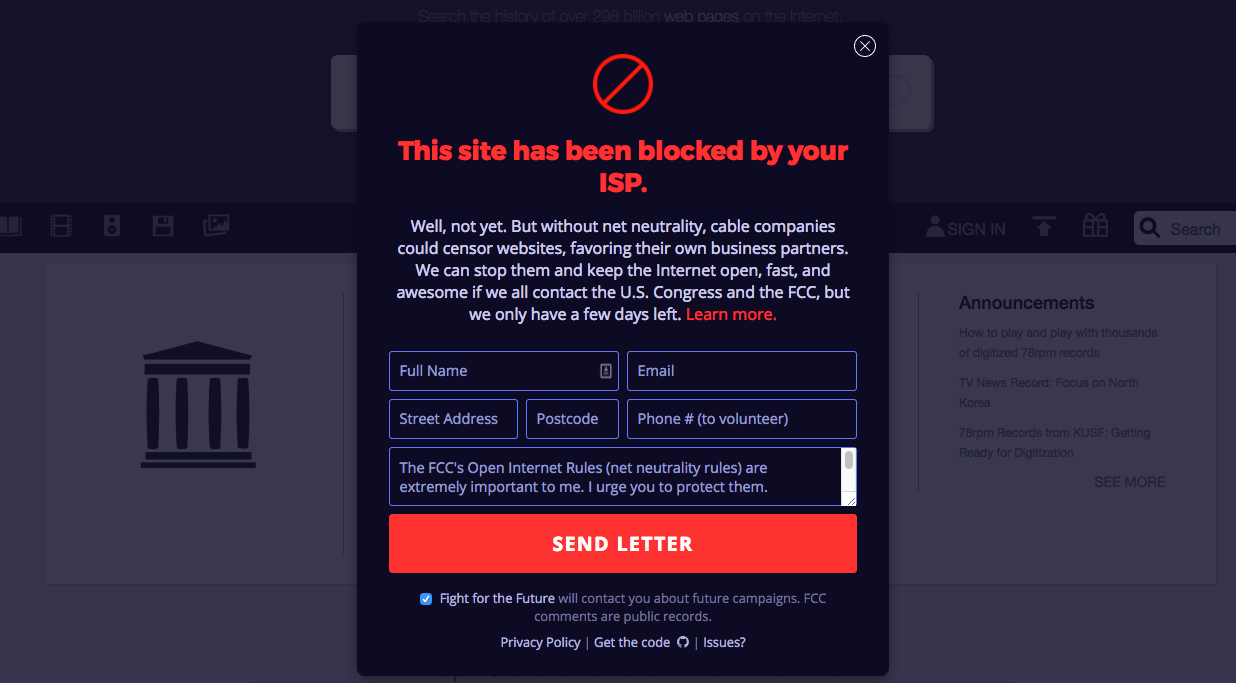 Today is the net neutrality Day of Action, and many thousands of organizations, companies and websites are standing up against the FCC's plan to gut net neutrality rules and let ISPs regulate themselves. The first deadline for comments on the FCC proposal is up in five days, and plenty of sites are making it easy today to voice your opinion.

Some of the more creative messages can be found at Greenpeace's and Reddit's websites. Greenpeace has a pop-up telling you the site has been blocked by your ISP and then goes on to explain that while it might not be true yet, it could be if the FCC's plan is approved. Reddit's page has a pixelated logo with an alert saying, "Monthly bandwidth exceeded, click to upgrade" and a pop-up with a slowly typed message that eventually says, "The internet's less fun when your favorite sites load slowly, isn't it? Whether you're here for news, AMAs, or some good old-fashioned cats in business attire, the internet's at its best when you -- not internet service providers -- decide what you see online. Today, u/kn0thing and I are calling on you to be the heroes we need. Please go to battleforthenet.com and tell the FCC that you support the open internet."

The ACLU also has a pop-up, and Kickstarter's is full page. Amazon's statement in favor of net neutrality is lower down on its page and only visible if you're signed in.

Those are just a few of the many sites that have chosen to participate today. Others include OkCupid, Tumblr, Dropbox, GoDaddy, DuckDuckGo, Expedia and Rosetta Stone. AT&T, which sued the FCC to fight against net neutrality rules just a couple of years ago, decided to support the Day of Action and net neutrality this time around, though there's nothing on its front page today. Verizon has decided that it's above the "slogans and rhetoric" of things like the Day of Action and says we need more-concrete action.

Companies have also released statements today. Lee Tien, an attorney with Electronic Frontier Foundation said, "It's our Internet and we will defend it. We won't allow cable companies and ISPs, which already garner immense profits from customers, to become Internet gatekeepers."

Rashad Robinson, the executive director of Color of Change said, "Chairman Pai's plan to gut the FCC's net neutrality rules will devastate Black communities. For the first time in history we can communicate with a global audience -- for entertainment, education, or political organizing -- without prohibitive costs, or mediation by government or industry. We join today's Day of Action to fight back against this attack on our 21st century civil rights. The FCC has the power and responsibility to defend our digital oxygen, our right to communicate online, and to protect the public from predatory business practices from giant ISPs determined to invent new ways to charge us even more for even less."

Co-founder of Reddit Alexis Ohanian said, "Net neutrality ensures that the free market -- not big cable -- picks the winners and losers. This is a bipartisan issue, and we at Reddit will continue to fight for it. We've been here before, and this time we're facing even worse odds. But as we all know, you should never tell redditors the odds."

And Sir Tim Berners-Lee, inventor of the world wide web, said, "If we lose net neutrality, we lose the open internet as we know it. What sort of a web do you want? Do you want a web where cable companies control the winners and losers online? Where they decide which opinions are read, which creative ideas succeed, which innovations manage to take off? That's not the web I want."

As of this writing, the FCC proposal has received over 6 million comments. Feel free to add yours here.

In this article: amazon, att, DayOfAction, FCC, gear, google, internet, NetNeutrality, services, TL17NTNEUT, verizon
All products recommended by Engadget are selected by our editorial team, independent of our parent company. Some of our stories include affiliate links. If you buy something through one of these links, we may earn an affiliate commission.