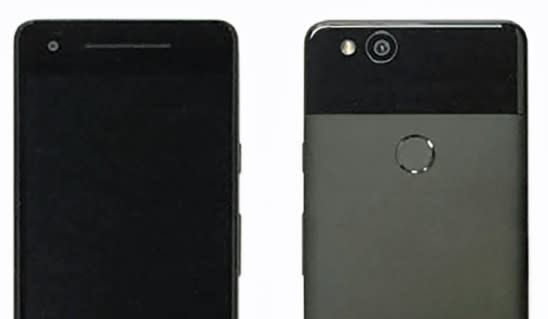 The recent leaks showing features of Google's upcoming Pixel phone indicated that it would look a lot like the previous versions, with a 6-inch AMOLED display and an HTC U11-like squeezable frame. It has also been rumored that the rear camera cutout is significantly larger.

Venturebeat's Evan Blass, who has a solid track record with leaks, has obtained a photo of the smaller Pixel device. The image shows that the Pixel won't have smaller top and bottom bezels, unlike many other newer phones on or coming to the market. Blass notes that neither Pixel will have a dual camera configuration, either, unlike the trend with Apple's iPhone 7 Plus, LG's G6, Samsung's Note 8 and Huawei's P10.

While HTC made both last year's Pixel and Pixel XL, VentureBeat says that HTC is only making the smaller device this year, with LG tapped to manufacture the larger XL handset. Both new phones will apparently only show iterative changes, though both upcoming Pixel models seem to have front-facing stereo speakers, much like HTC's BoomSound brand. Blass also reports that Google has also decided to get rid of a headphone jack on the Pixel line, much like Apple, HTC and Lenovo have done with their own smartphone designs.

In this article: gear, google, htc, leak, lg, mobile, phone, pixel, pixelxl, smartphone
All products recommended by Engadget are selected by our editorial team, independent of our parent company. Some of our stories include affiliate links. If you buy something through one of these links, we may earn an affiliate commission.