It's been nearly two years since Sphero introduced its app-controlled BB-8, a replica of the cute rolling droid that first appeared in Star Wars: The Force Awakens. That toy quickly became one of the most coveted by fans of Disney's franchise, and it wasn't long before the company followed it up with a Battle-Worn Edition, designed to look as rugged as the character does in film. And today at IFA 2017, Sphero announced it is expanding its connected-toy universe with two more Star Wars droids, R2-D2 and BB-9E. Naturally, Sphero worked closely alongside Lucasfilm to bring these to life, just as it did with BB-8. The idea, as you might expect, is to make them as close to the real thing as possible.

R2-D2 needs no introduction, but you're probably wondering who this BB-9E character is. Well, it's essentially an evil version of BB-8, the First Order's very own rolling droid. It hasn't been confirmed yet, but there's a good chance we'll see BB-9E in the next Star Wars film, The Last Jedi, which is hitting theaters on Dec. 15th. Like with Sphero's BB-8, the new droids can be controlled using an iOS and Android app. With R2-D2, for instance, you can drive it around and have it make different sounds and moves -- including falling on its head. Because that's definitely a thing R2-D2 would do. 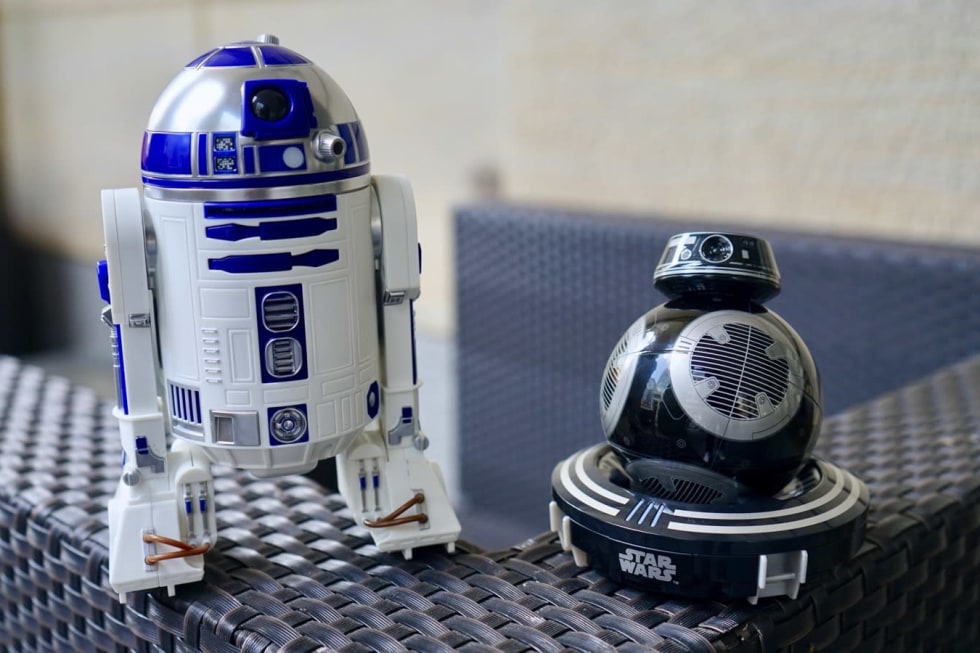 One of the main changes with R2-D2 is that unlike the BB-8 models and BB-9E, it has a speaker built in. Sphero says it worked with audio experts with experience from "places like Bose" to make this happen, and the sounds you'll hear from R2-D2 are straight from Star Wars: A New Hope. As much as we wish BB-9E would have the same feature, we're told a speaker wouldn't fit because of the smaller size of the toy's shell. That said, you can still hear its sounds from your paired device, through the companion app. In addition, BB-9E's headlights up, which isn't the case for the BB-8 toy. This was made possible thanks to new inductive-charging tech that passes electricity from BB-9E's body to its head.

Speaking of, Sphero is also rolling out a new application called Sphero Droids, a hub for you to easily keep track of and control all the models you own. Aside from that, the app offers interactive augmented reality modes, which let you do things like go inside the Millennium Falcon ship and virtually explore it with your R2-D2. Another nifty thing you'll be able to do later this year is program R2-D2 and BB-9E using Sphero's stand-alone Edu app, in case you or your kids want to get more creative. As part of the R2-D2 launch, Sphero is working with Apple on a Swift Playground, which will let users tinker with the droid using that coding platform.

In this article: apple, appleswift, bb-8, bb-9e, bb9e, bose, disney, entertainment, forcefriday, forcefridayii, gadgetry, gadgets, gear, hands-on, lucasfilm, r2-d2, r2d2, sphero, starwars, starwarsthelastjedi, swift, thelastjedi, TL18DRD, toy, toys, video
All products recommended by Engadget are selected by our editorial team, independent of our parent company. Some of our stories include affiliate links. If you buy something through one of these links, we may earn an affiliate commission.