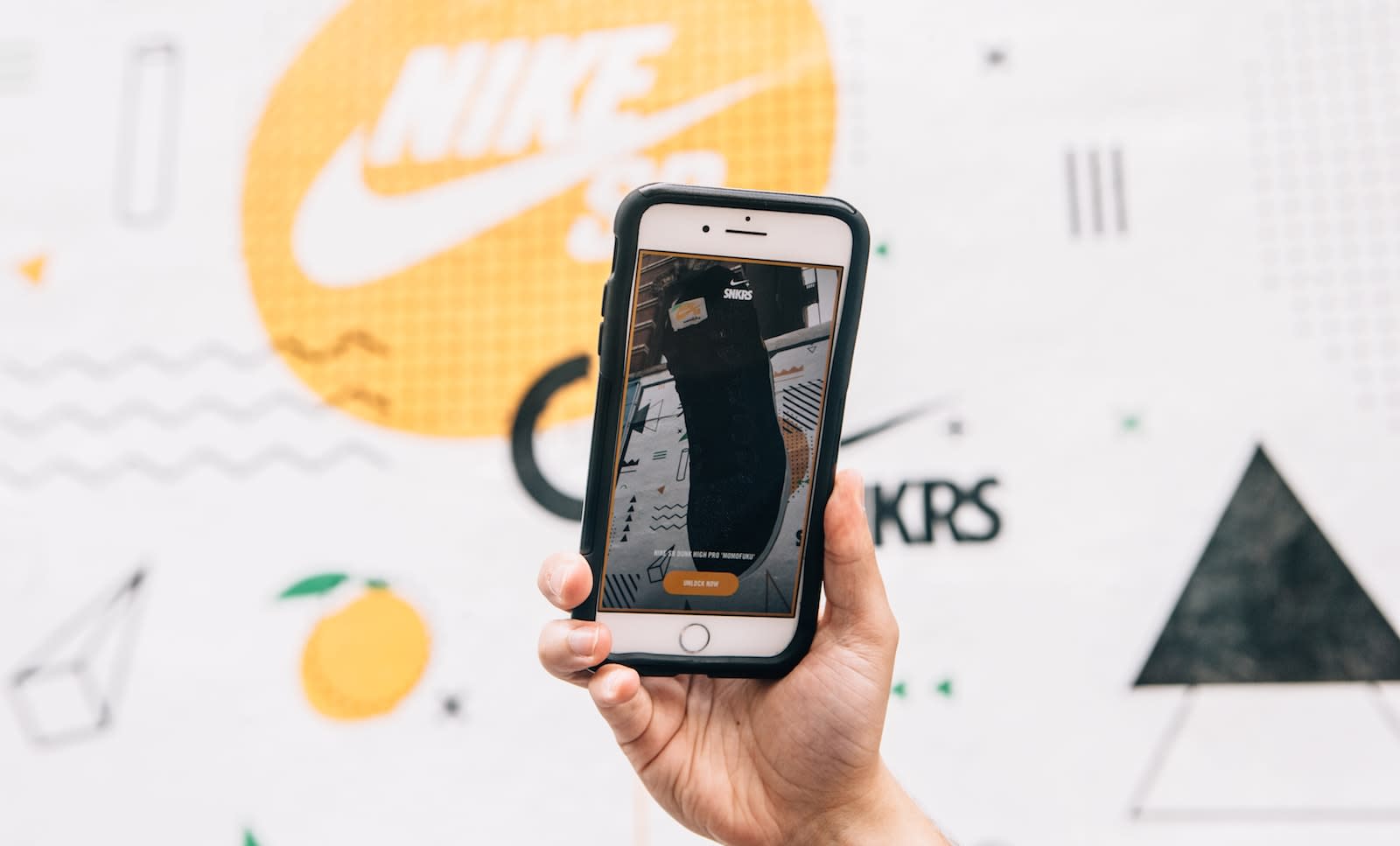 For Nike, augmented reality is the perfect way to sell hyped sneakers

The technology has become the company’s unexpected weapon against bots.

Buying limited-edition shoes is complicated and not as fun as it should be. The rise of violence in sneaker culture (people have been murdered for a pair of Air Jordans) led companies like Nike to launch hyped products almost exclusively on digital channels. But selling sneakers on a website, or doing raffles on Twitter, came with challenges of its own. That's because resellers started using bots, automated computer scripts, to buy or reserve pairs faster than a human could. If you couldn't enter an address and credit-card number in a matter of seconds, whatever you were hoping to get was going to be sold out.

But Nike may have a secret weapon against auto-buying tools: augmented reality. The company began experimenting with the technology in June during the release of the SB Dunk High Pro "Momofuku," a model designed in collaboration with famous chef David Chang. Nike made pairs available through its SNKRS app for iOS (sorry, Android folks), and the only way sneakerheads could buy them was using a new AR feature. To unlock these in the application, you had to go to the product page, tap on a 3D model of the sneaker and then point your smartphone's camera at a menu of Chang's Fuku restaurant in New York City. The tech wasn't limited to a physical menu, so you could also gain access by pointing your device at a web version of it or special SNKRS posters that Nike put up across NYC. AR is all about mixing digital objects with the real world, and this was a great way to show how that would sell product.

Most important (and perhaps unexpectedly), AR became the perfect tool for Nike to fight off bots, since the experience requires a physical interaction with buyers. And that seems to be paying off. Just a few weeks ago, Nike President of Direct to Consumer Business Heidi O'Neill said at Recode's Code Commerce conference that bringing the tech to SNKRS "has come very close to eliminating bots, and taking the sneaker hunt [to] as close to a fair game [as] it is anywhere in the industry." In fact, the experiment has turned out so well that Nike now plans to use it more broadly. I had the chance to try out one of the latest AR experiences in SNKRS recently, which uses geo-location components to draw crowds to a specific place -- a la Pokémon Go. As part of an early launch of The Ten: Air Force 1 Low, one of the most anticipated shoes of 2017, Nike demoed these features at its new s23NYC studio in Manhattan, where the company is developing "innovations geared toward reimagining sneaker culture and commerce." Along with SNKRS AR, that also includes things like SNKRS Stash (think: a scavenger hunt sans AR) and Shock Drop (an unexpected release).

The entire AR experience worked seamlessly; granted, I was in a controlled setting with about 20 other reporters and some social-media influencers. For this particular demo, Nike posted SNKRS stickers all throughout its s23NYC space, which you had to find in order to buy The Ten: Air Force 1 Low. Once I found one, I took out my iPhone, opened the SNKRS app, found the product page and then tapped the "Start Looking" button. That brought up the camera view and, once I pointed it at the sticker, an "Unlock Now" option came up -- along with a 3D model of the shoe.

After that, I just had to double check that my size, address and personal credit card details were correct before purchasing. This is simplified if your info is already stored in your Nike account. All in all, I'd say it only took about two minutes to complete the process, from the moment I started looking for the stickers to when I received the craved "Got 'Em" message. Naturally, this would be slightly different if you were, say, in Central Park, but Pokémon Go is the perfect example of how AR can work well in large crowds.

While Nike was hosting media at its s23NYC studio, it had a random drop using SNKRS AR in Chicago. To find where the augmented-reality feature could be activated, sneakerheads had to look at a vague image of a place and guess where it was. After they showed up, Nike said the sneaker sold out in less than 20 minutes. Going forward, Nike intends to bring experiences like these to more cities around the world. Nike Chief Digital Officer Adam Sussman told Engadget the company didn't create these features with killing auto-buying tools in mind. Still, that was a positive byproduct of experimenting with new technologies. "We're very focused on security and stability. Everytime we have a release, we're incredibly focused on limiting any type of bot attacks," he said. "But we're also moving to a world of serving consumers one to one, [and] that naturally fights off bots attacks because now we're starting to develop individual relationships."

Sussman, who worked at gaming companies EA and Zynga before joining Nike, said that ultimately, his team's goal is to "get our shoes to people who want [them], not to robots or resellers." And while he wouldn't discuss specific numbers, Sussman said there's been "a very high success rate in fighting bots" since the introduction of SNKRS AR and other features like Stash. He added that one of the reasons Nike wanted to bring augmented reality into the mix because it saw its potential to become mainstream, particularly after the launch of Apple's ARKit, which will put the technology in millions of people's hands. Ultimately, our focus is making sure that we get our shoes to people who want them, not to robots or resellers.

Of course, there are also risks. For starters, going out on AR hunts could lead people into robbery traps. But Nike is confident this won't be the case; after all, you won't be getting the shoes right there and then. "When you don't have product on site showing the 'haves' and the 'have-nots,' said Ron Faris, GM of Nike SNKRS and s23NYC, "the risk of negative elements sometimes associated with physical launches and lines is reduced." He added that Nike's actually seen a positive effect with SNKRS AR and Stash, with sneakerheads helping each other throughout the process.

Nike competitors such as Adidas haven't tried anything like this yet, but if SNKRS AR ends up being more than a gimmick, don't be surprised if the German sportswear giant starts finding ways to use the tech. As it stands, there's definitely potential for SNKRS AR, but the challenge ahead for Nike will be to see if it can make it work on a larger scale, not just in a handful of cities. It will also have to figure out how to get Android users involved because right now most of these experiences are exclusive to iOS -- and that seems like an oversight.