It offers much of what Huawei's Mate 10 does, but for less cash.

When Huawei sub-brand Honor revealed its new Honor 7X a few weeks ago, we weren't exactly thrilled. You can only squeeze so many thrills out of a big screen and a mid-range chipset, after all. Thankfully, that wasn't the only device Honor has been working on. Honor's deal has always been about delivering solid performance on a budget, but it's getting a bit more ambitious with the new View 10 (known as the V10 in China). Huawei and Honor are seemingly intent on building a OnePlus-style flagship that won't break the bank, and if a little hands-on time is anything to go on, the View 10 is already shaping up to be a serious contender.

Gallery: Up close with the Honor View 10 | 7 Photos

As you might've heard already, the View 10 uses a 5.99-inch LCD screen that takes up almost all of the room on the phone's face. In keeping with devices like the OnePlus 5T — which the View 10 is set to directly compete with — the 18:9 "FullView" screen is taller and narrower than ones seen in earlier Honor devices. The company hasn't rid the phone of bezels entirely, but they're slim enough that the phone still feels easy to use with just one hand. The View 10's all-metal body feels surprisingly light, too, considering there's a 3,750mAh battery wedged inside. In typical Honor fashion, though, the View 10's design is pretty bland. There's nothing wrong with it, per se, as long as you weren't hoping for some Honor Magic-esque flair.

What little extra space remains was put to good use, though: unlike the recently announced Honor 7X, there's a front-mounted fingerprint sensor sitting right beneath the display, and there was enough room left over to squeeze in a standard headphone jack. And while other Android OEMs have been happy to ditch expandable memory options, the View 10 takes microSD cards as large as 256GB — not too shabby, especially when you consider the device will be available with up to 128GB of onboard storage. 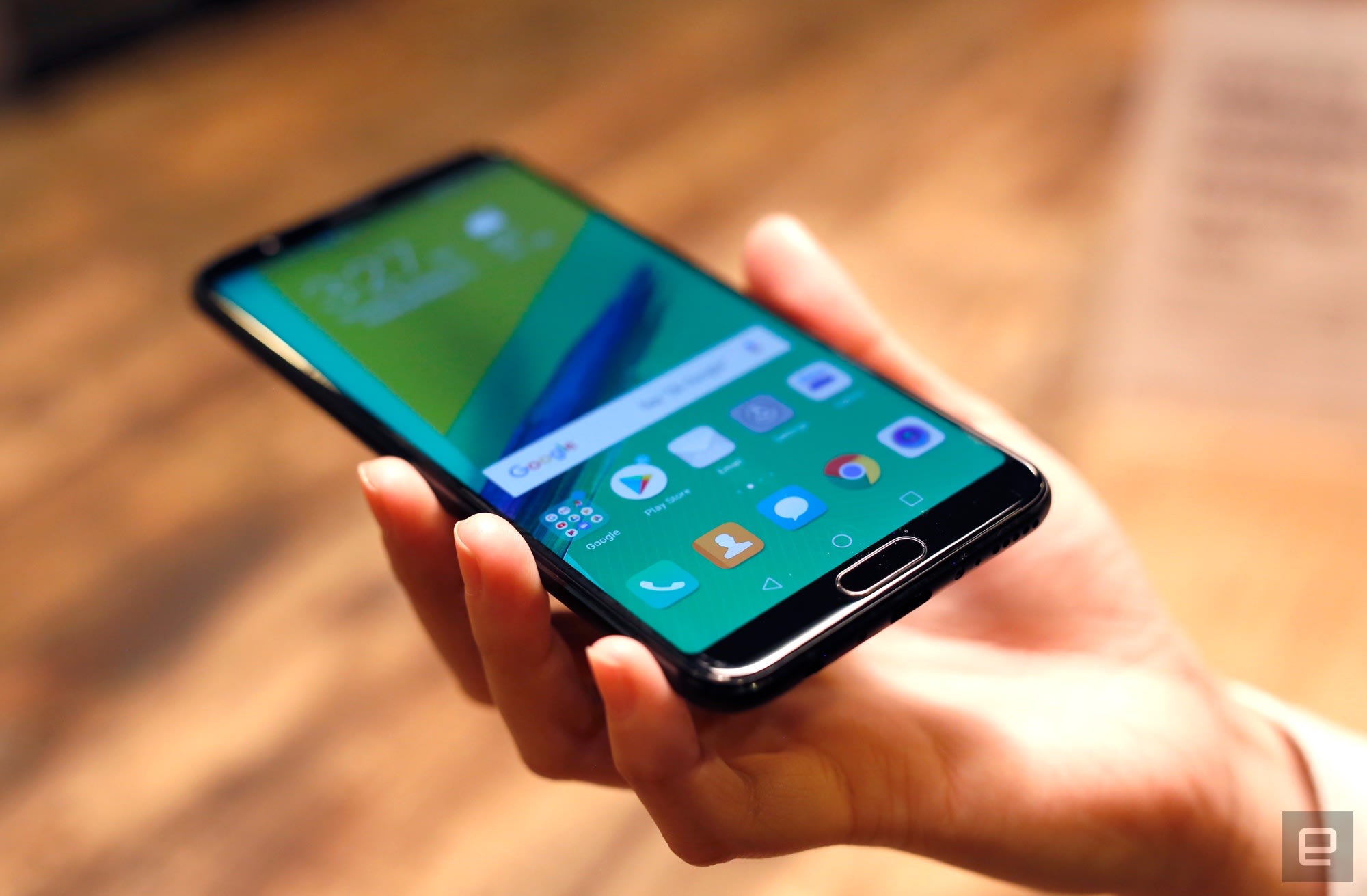 That's all fine, but let's talk power. Like the Mate 10 and Mate 10 Pro before it, Honor's View 10 uses one of Huawei's Kirin 970 chipsets — you know, the one with the neural processing unit. Huawei is still bullish on the idea of weaving AI throughout the smartphone experience, and even though we weren't amazed by the chip's machine-learning chops in the Mate 10, getting that kind of power and potential in a more affordable body is something to celebrate. Now we just need developers building software that really takes advantage of that NPU. The 970 is a remarkably snappy chipset in its own right, though, especially if you spring for the model with 6GB of RAM (subject to availability, naturally).

Meanwhile, the dual camera around back should seem familiar to long-time Huawei fans. The lack of Leica branding is pretty conspicuous here, but no matter: the View 10 once again pairs a standard 16-megapixel color camera with a 20-megapixel monochrome camera. The few test shots we took looked pleasant enough (especially those captured with the monochrome sensor), but we're a little concerned by the way both cameras jut out of the View 10's back. If you didn't mind the iPhone's camera humps, this won't be too much to worry about, but don't forget: the Honor 9's dual camera sat flush with the phone's body. 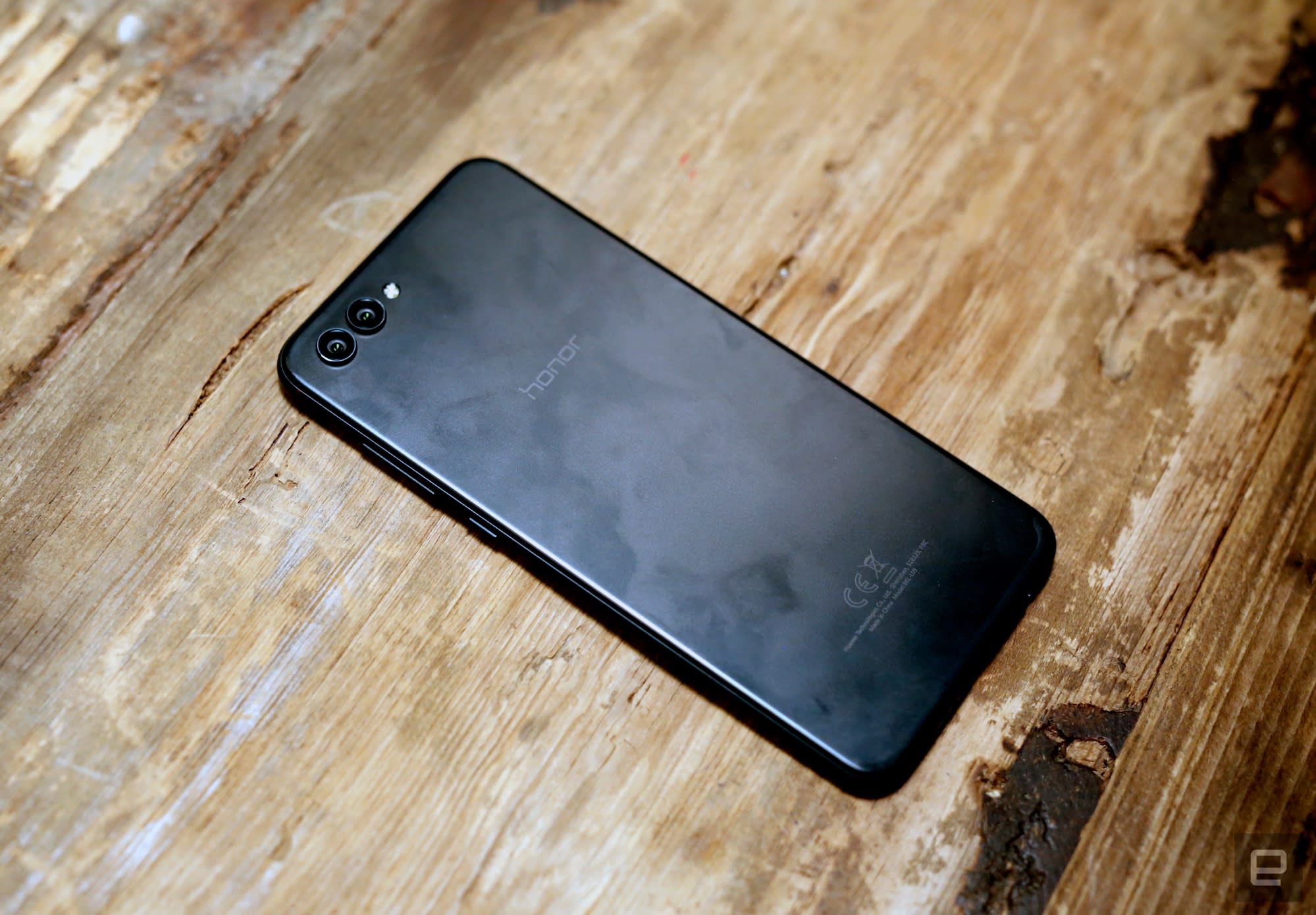 Unfortunately, the unit we played with was running some seriously non-final software, so not everything worked the way we had hoped. The View 10 runs a version of Android Oreo that has been painted over with Huawei's EMUI interface, and while it was generally quite snappy during our play session, we did notice a few occasional hiccups. Also, you won't find Huawei's cheeky TrueDepth Camera clone here; the View 10 will only come with a more conventional face unlock feature, but that won't arrive until a future OTA update. Face detection will also keep the screen awake while you're looking at your phone, and figure out how you want the screen orientated automatically (by not rotating when you're lying down, for example). There weren't any games loaded onto our demo unit, so the included Gaming mode — which blocks notifications and allows for screen recording while in the midst of the action — was also off-limits.

Honor hasn't locked down global pricing and availability yet, and for once, we're eagerly awaiting the details. We do have some of the broad strokes, though: the View 10 will land in the US in the first half of 2018, and it should cost around $500 when it does. That's pretty pricey for an Honor device, but it's also safe to say the View 10 is a pretty unusual — and powerful — proposition for a brand that has mostly played in safe in the States.

Update: During its London event today, Honor announced the phone will go on sale January 8th in the US, Europe and a few other territories. We still don't have any firm US pricing yet, but the View 10 will cost £450 in the UK, and €500 throughout the rest of Europe.

All products recommended by Engadget are selected by our editorial team, independent of our parent company. Some of our stories include affiliate links. If you buy something through one of these links, we may earn an affiliate commission. All prices are correct at the time of publishing.
Honor squeezed more screen into its budget View 10 flagship
android
emui
gear
hands-on
honor
honorview10
huawei
mobile
smartphone
v10
view10