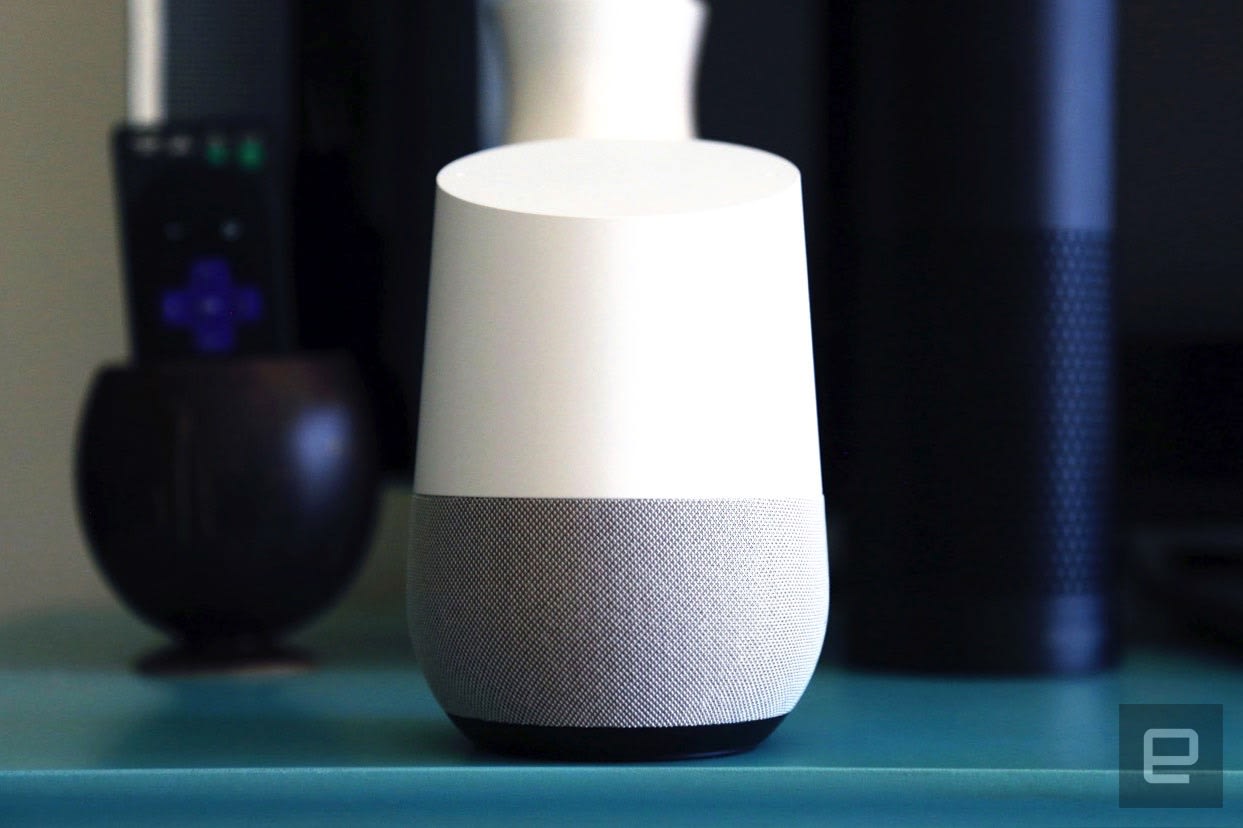 Google Home is getting a big upgrade today: The smart speaker can now place voice calls, no cellphone needed. This feature was first announced back at Google I/O in May, but it's now ready to roll out to users in the US and Canada. It's yet another feature that helps keep the Home competitive with Amazon's Echo family, which added calling back in May. We haven't gotten to try it out yet, but it sounds like it should be pretty straightforward to get your Home working as a speakerphone. But there are a few things you'll want to know before you give it a shot.

For starters, voice calling on Google Home supports multiple users, so anyone in your household who has set up the device to recognize her particular voice will be able to make calls directly from her personal contact list. Basically, that means if you and a roommate both ask Home to call your mom, it'll use your contacts to find and call the right parent.

Speaking of contacts, you'll need a Google account with a well-maintained contact list for this to be useful. If you're an Android user, this probably won't be an issue. But if you're using iOS and have also had a Gmail account for a long time, it's entirely possible your contacts list is long, unorganized and unruly. Fortunately, Google has made managing your contacts online much, much easier in recent years: The current web contacts interface for your Google account is simple and clean. And if you have a master list stored somewhere else, you should be able to export it and then import it into your Google account without much trouble.

As Google said when this feature was first announced, Home doesn't actually use your cellphone to place a call. Obviously, most everyone with a Google Home will also have a smartphone of some sort, but if your phone breaks or is otherwise unavailable, that won't stop you from from making calls through your smart speaker. Unfortunately, that means the people you call won't see your familiar phone number pop up when you ring them from Google Home. Instead, they'll see "unknown caller" or "no caller ID" -- not the best thing to pop up, given the growing annoyance of robo-callers. The good news is that Google will let you link your personal phone number to Google Home by the end of the year, so at least this will be a temporary problem. That said, if you use Google Voice or Project Fi, you can link those numbers up now rather than waiting until the end of the year.

Aside from these details, calling should be pretty straightforward: Just say "Hey, Google, call ..." and name a contact. You can also ask Home to call local businesses using natural language like "call the nearest coffee shop." All domestic calls are free, but you won't be able to make international calls or dial up "premium rate" numbers unless you have a Project Fi or Google Voice account. In that case, you'll get charged the same rate you'd pay through those services.

If you want to give Google Home calling a shot, just ask your speaker today -- but there's no guarantee it'll work yet. As with many Google products, this is a gradual rollout over the next week. If you don't feel like waiting, it might be worth giving the Google Home Preview Program a shot. You'll get early access to new features, though there might be a few bugs along the way. But with something like voice calling that Google is officially announcing, things should work without a hitch. If you're not feeling brave, you might have to be a little patient.

In this article: gear, google, GoogleHome, Home, internet, smartspeaker, voicecalling
All products recommended by Engadget are selected by our editorial team, independent of our parent company. Some of our stories include affiliate links. If you buy something through one of these links, we may earn an affiliate commission.