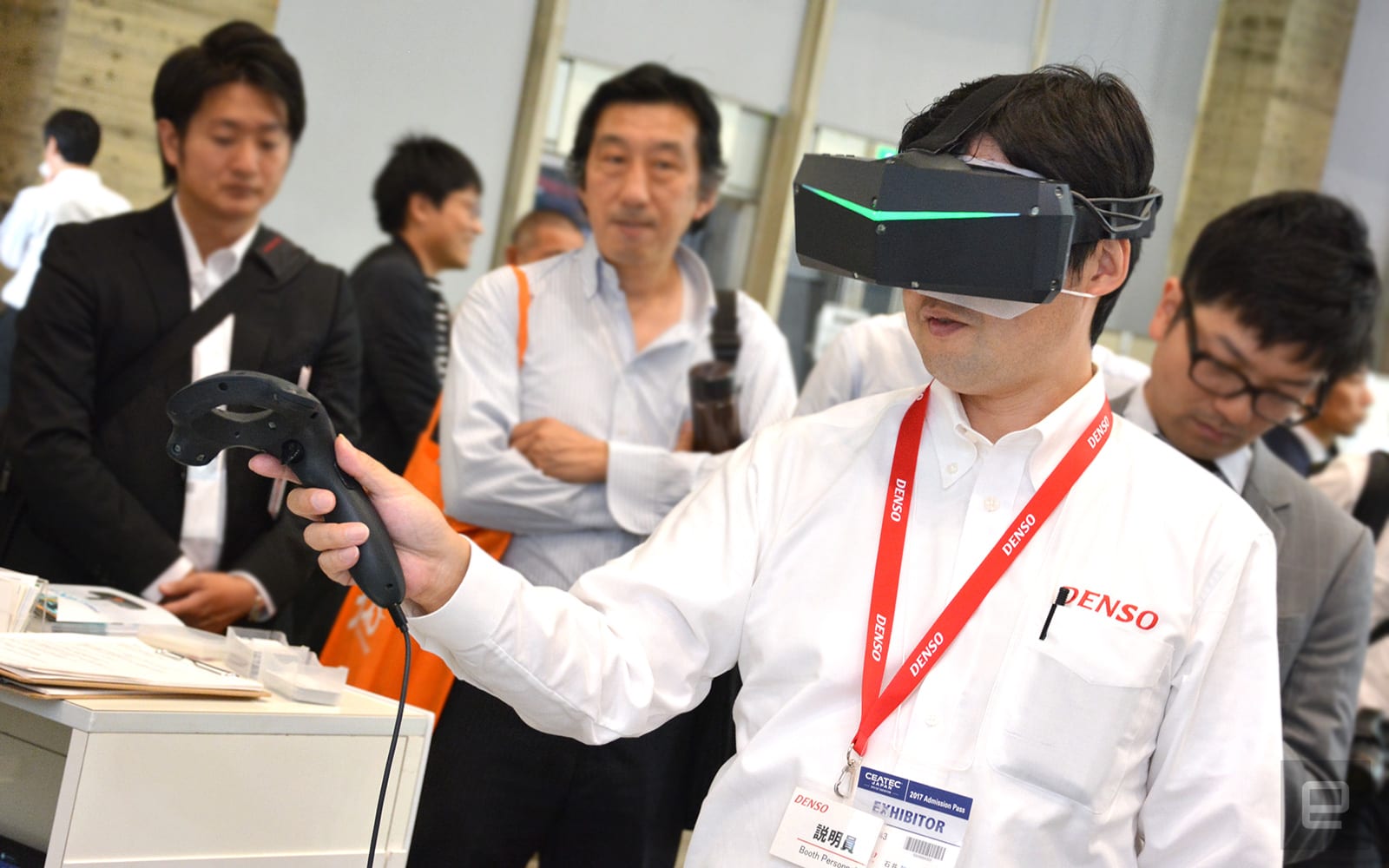 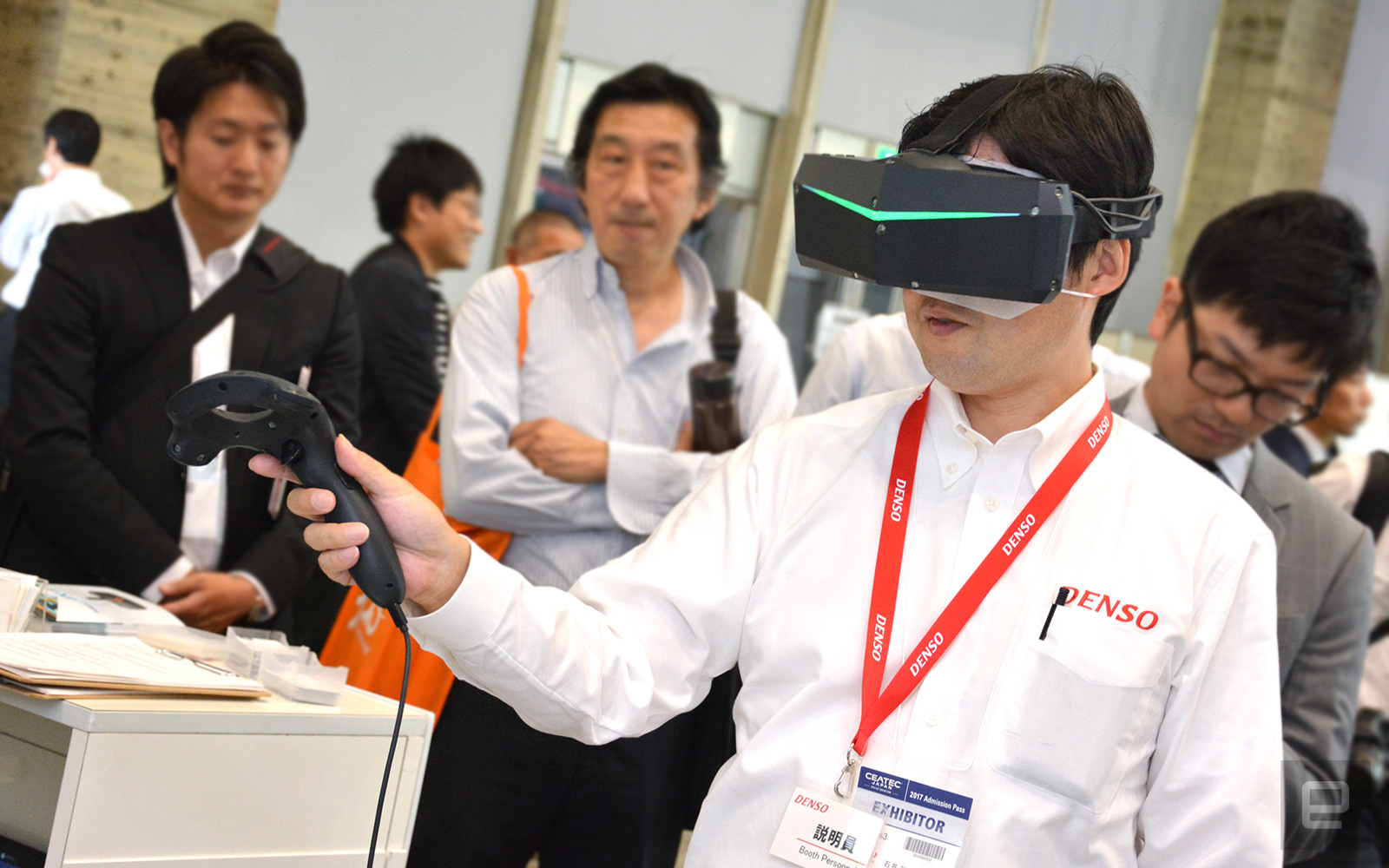 As much as I enjoy the occasional VR gameplay, I've been waiting for headset manufacturers to boost the pixel density in order to reduce the screen door effect, as well as to widen the FOV (field of view) for a more immersive experience. There's no doubt that the big names like HTC and Oculus are already working on it, but to my surprise, a Chinese startup by the name of Pimax simply went ahead. At CEATEC, I came across the Pimax 8K headset which not only features an incredible 7,680 x 2,160 resolution (more on that later), but also laser tracking that works with HTC Vive's base stations, plus an impressive 200-degree FOV which is almost double that of existing offerings. Before we go any further, yes, the 7,680 x 2,160 resolution here isn't the "8K" you're thinking of (that's 7,680 x 4,320, twice as many pixels), and some went as far as accusing the company of misleading people with the product name. Pimax argues that the "8K" here is to highlight the much higher horizontal resolution which, to be fair, is an industry first. A more accurate way to describe this is that each eye is looking at a 4K (3,840 x 2,160) panel with a 90 Hz refresh rate inside the headset, and if you ask me, this sounds just as impressive in today's market. Maybe "Pimax 4K Duo" would be less controversial?

Speaking of display panels, unlike the PlayStation VR, the HTC Vive and the Oculus Rift, the Pimax 8K uses CLPL or "customized low persistence liquid" panels instead of OLED. Pimax claims that with CLPL it has "completely eliminated ghosting and improved brightness" (presumably a comparison to traditional LCD). CLPL and OLED apparently only have some minor differences in terms of contrast and color temperature, but the former can achieve a higher pixel density for the same cost. It's unclear what sub-pixel arrangement has been applied to this CLPL technology, but I'll update here if I hear back from Pimax about this. Update: Pimax confirmed that CLPL uses RGB sub-pixel arrangement, which is denser than PenTile as used on the Vive and the Rift. 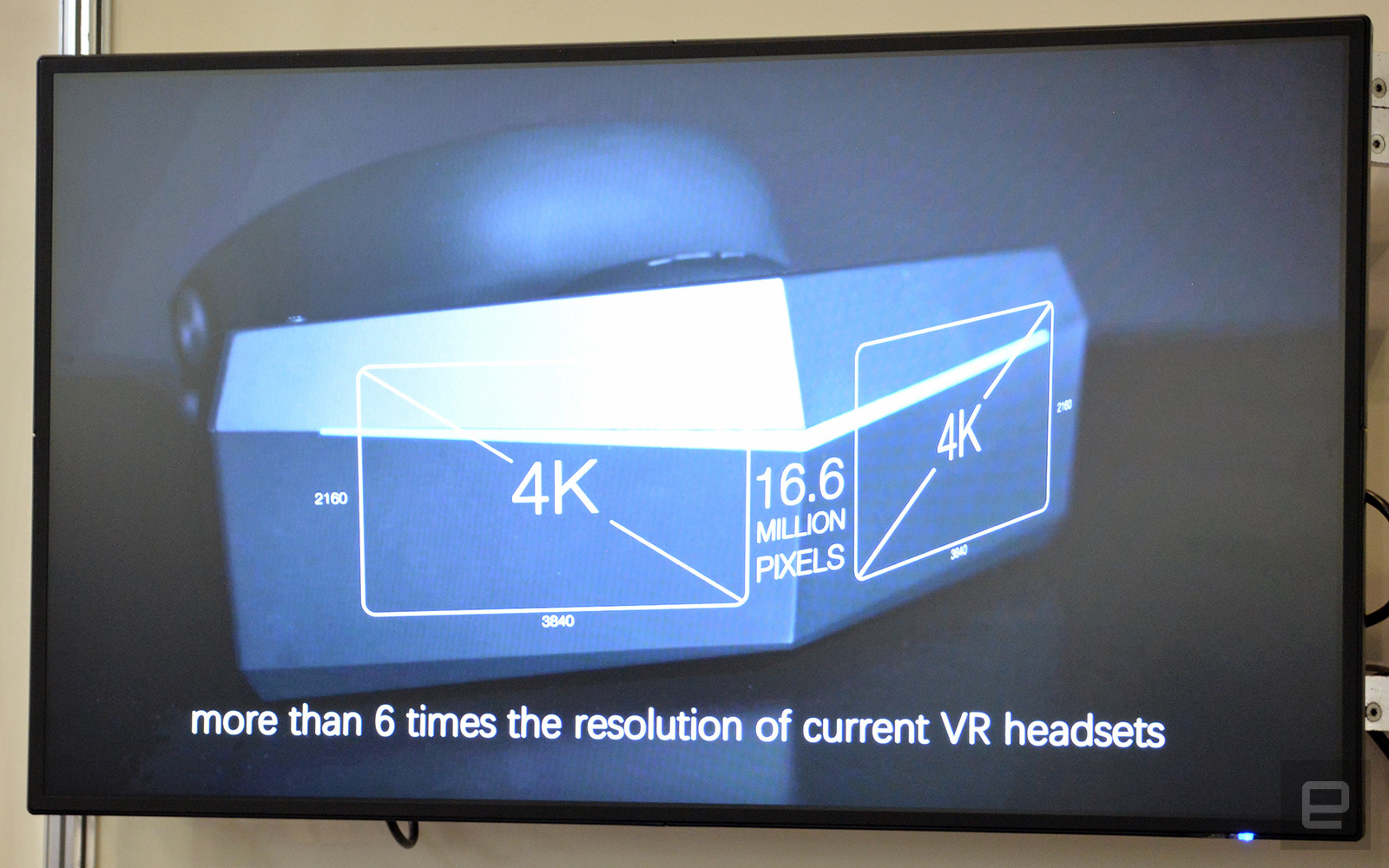 As I waited in line for some hands-on time, I noticed that the demo setup was running on an MSI laptop equipped with an NVIDIA GTX 1080 GPU. I thought: surely that would struggle with an "8K" output? I later found out that Pimax 8K is actually designed for 4K input or less (the prototype was using HDMI, but the final version will likely use DisplayPort instead), and then it upscales the signal to "8K" internally. This means your PC could get away with using just an NVIDIA GTX 980 or GTX 1070, and you'd still be able to enjoy the invisible pixel grid on the displays.

Indeed, the brief session of Fruit Ninja through a Pimax 8K was literally the most immersive VR gameplay I've ever had. As soon as I put on the headset, I was amazed by the lack of black border within my vision. For the first time ever, I finally felt like I wasn't looking into a VR headset! The device felt comfortable to wear and didn't feel heavy despite its bulky look -- unlike the StarVR with a similarly wide 210-degree FOV. Pimax claims that its headset is actually lighter than a Vive, but it has yet to finalize the weight.

As expected, I could not see any sub-pixels thanks to the insanely high display resolution, nor did I notice any ghosting. Interestingly, I only found out after the demo that the laptop was actually just pushing a 2,560 x 1,440 output, but what I saw was still significantly better than what I'm used to on other VR headsets. So far, this whole package is basically everything I've ever wanted in a VR system. Head tracking and the Vive-like controller worked fine, too, though I'll need more hands-on time to assess their reliability. 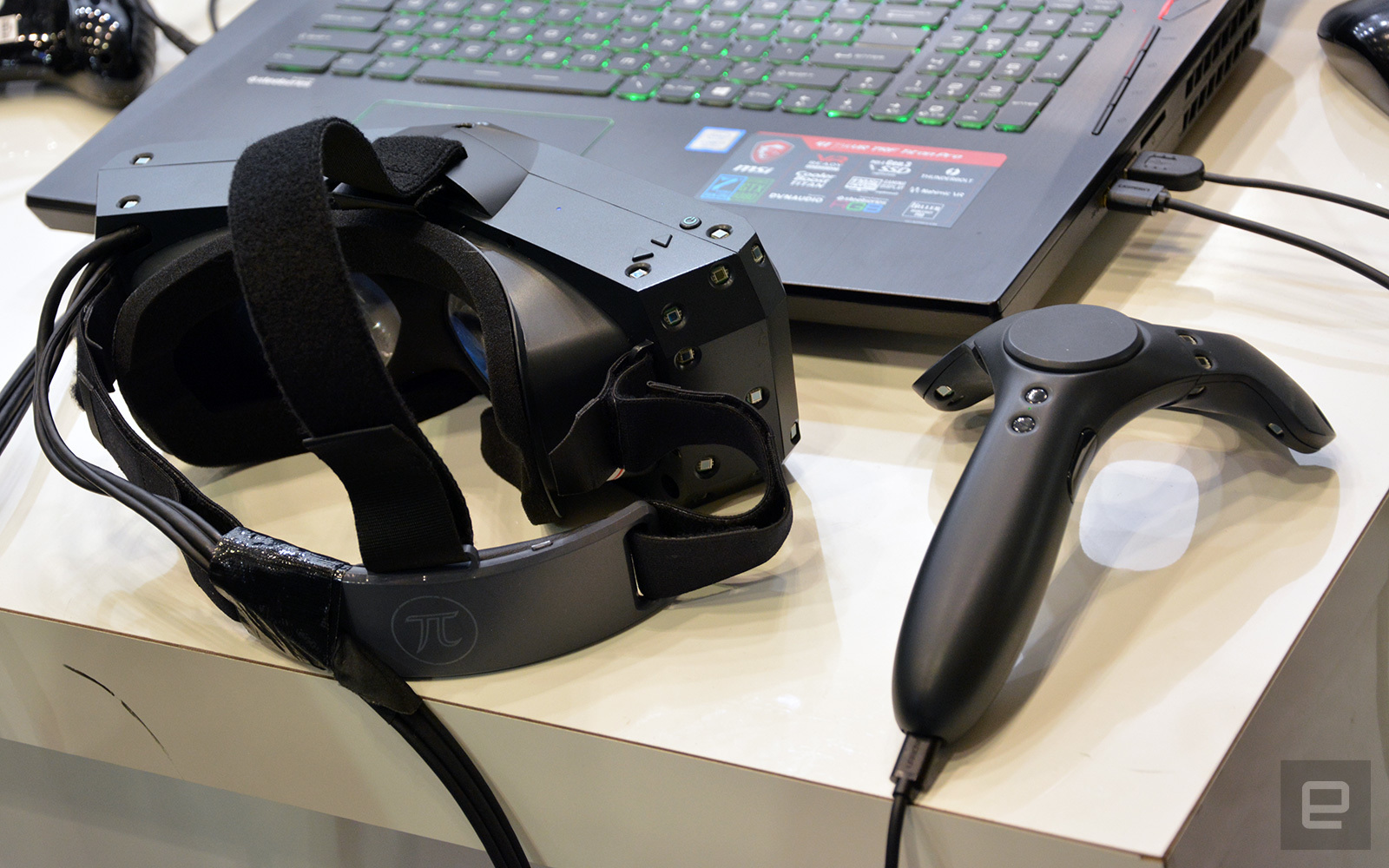 For those who originally assumed that the Pimax 8K would take an "8K" signal, well, that's what the higher-end Pimax 8K X is for. This special model is made for the hardcore users who plan to use the headset with at least an NVIDIA GTX 1080 Ti (pending further testing but may require SLI configuration) or the next-gen NVIDIA Volta, and the headset will likely have two DisplayPorts -- one for each 4K panel. The image quality here would obviously be better than the upscaled view on the Pimax 8K, but given the demanding hardware requirement for an "8K" output, the Pimax 8K would make more sense for most of us.

In fact, there's also a more affordable Pimax 5K based on the same headset design but houses two 2,560 x 1,440 CLPL panels instead. Still, this resolution is higher than what PlayStation VR, HTC Vive and Oculus Rift are offering, so this "5K" model will no doubt appeal to those who want to try high-end VR with a smaller budget. At the time of writing this article, this is still available for $349 on Kickstarter if you already have a Vive base station plus controllers, and it's expecting a January 2018 delivery; though if you want the two base stations plus two controllers as well, you'll have to fork out an extra $300 and wait until February for the delivery.

As for the Pimax 8K, it's starting at $499 and is also expecting a January 2018 delivery; but like the Pimax 5K, you'll need to add $300 for the controllers plus base stations, and expect a February delivery as well. Alas, the higher-end $649 Pimax 8K X is no longer available, but its backers will have to wait until May.

The company added that expansion modules are in development, and these will provide features like inside-out tracking, eye tracking, wireless transmission, scent and more. It's a highly ambitious move from a startup, but we'll be happy enough just to see the delivery of the headsets themselves.

Source: Kickstarter, Pimax
In this article: 8k, ceatec2017, gear, hands-on, pimax, pimax8k, TL188K, vr, vrheadset, wearables
All products recommended by Engadget are selected by our editorial team, independent of our parent company. Some of our stories include affiliate links. If you buy something through one of these links, we may earn an affiliate commission.