Many companies have tried to make the mythical dual-screen folding smartphone a reality. All of them have failed. But ZTE thinks it's time to try again. Now that Android supports multi-window apps, the company expects it will get enough buy-in from developers to create a phone that people will actually find useful. The Axon M will be an AT&T exclusive when it arrives in the US next month for 30 monthly payments of $24.17. I tried out the Axon M and while I'm not completely won over by the handset itself, I find the potential applications compelling. Think of the Axon M as a tiny laptop with a screen where the keyboard and trackpad would usually be, except the screens face outward. A hinge in the middle lets you flip one display all the way back so both panels are on the outside. The secondary screen is thinner than the main display, but it feels sturdy and didn't flex during my testing. Together, the two 5.2-inch displays make one 6.75-inch screen and are separated by a 180-degree hinge.

The hinge is rigid enough to hold the screens in place even when they are slightly ajar, and this lets you prop the phone up in what's called "tent mode" in most convertible laptops. Because the Axon M can only be opened up as wide as 180 degrees for full-screen viewing, you can't get the displays to face each other. For the most part, you'll likely be using the Axon M like a regular phone, with both screens pointing outward and just the primary display turned on. 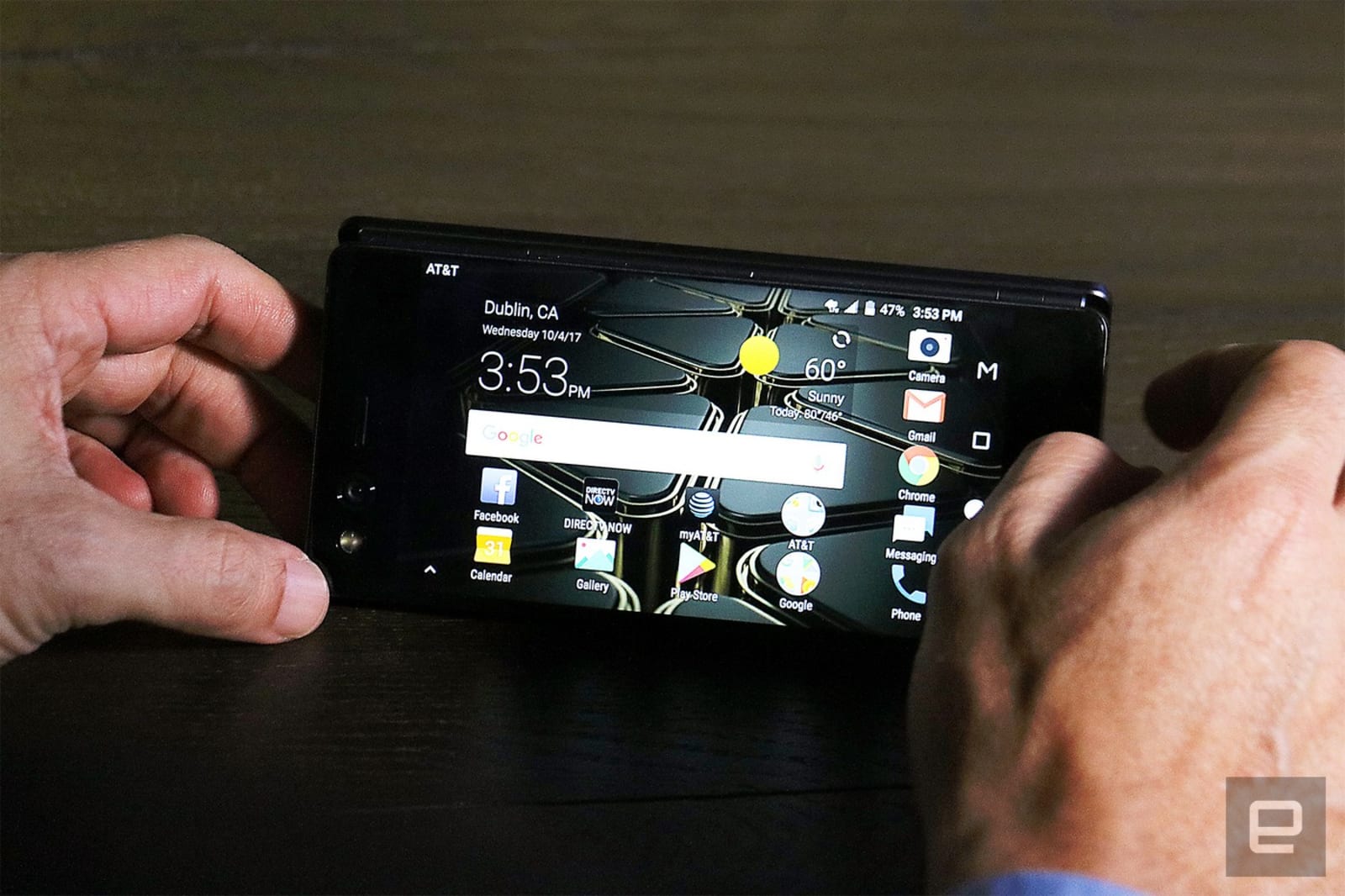 To make use of these viewing positions, the Axon M features three modes that you toggle through by tapping the M button ZTE added to the Android 7.1 Nougat navigation bar. This brings up four icons: Extend (full screen), Dual (two apps side by side), Mirror (same contents on both screens) and the regular single-screen format. The names can be confusing to understand at first, but the icons help by graphically depicting what each mode does. For example, Mirror mode is represented by a rectangle split into two with the letter "A" on either side, while Dual shows "A" on one side and "B" on the other.

The Axon M switched quickly among these modes during my demo. Mirror and Extend are relatively straightforward, since you just have to tap the corresponding symbols and the display is either duplicated or stretched, respectively. Dual mode brings up a launcher for you to pick the app that you want to run on the second screen.

All three modes are useful in their own way. Dual, for instance, makes for efficient multitasking since you can drag and drop info between the screens, bring up a reference Wikipedia article while typing an email, or compose a tweet while watching a YouTube video. Developers don't need to implement new code for this to work, either; as long as the app works with Android Nougat's multi-window feature, it will work on the Axon M. 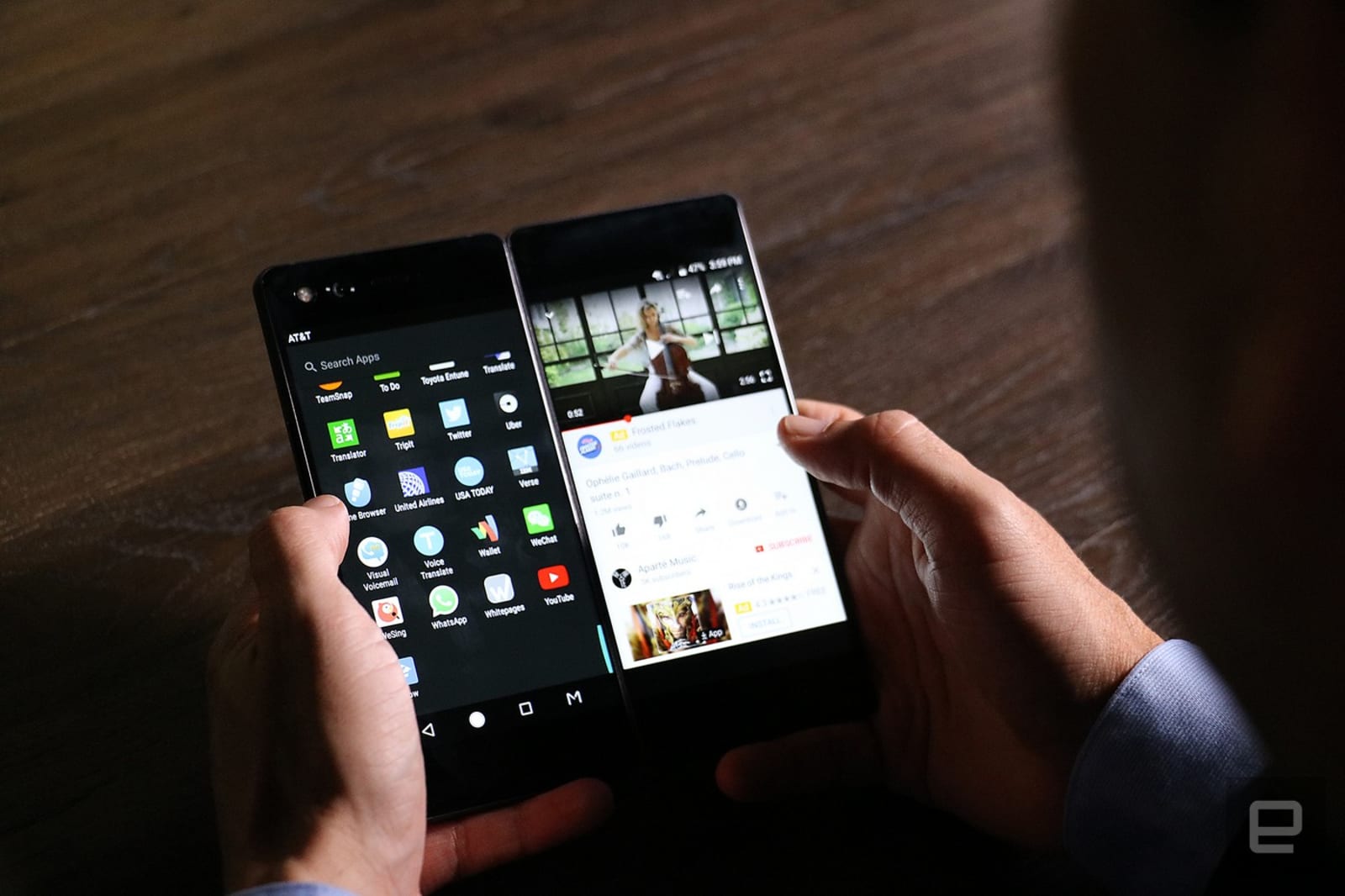 Mirror mode has obvious benefits as well. It lets you display PowerPoint presentations or show a YouTube video to someone sitting across from you. It was also fun to play a game of Battleship in this mode with ZTE's global vice president of technology Jeff Yee, but the game had to be optimized to recognize input from alternating screens.

The advantages of Extend mode aren't as obvious. It opens an app across two screens, which lets you see more content at once. My first thought was that the squarish aspect ratio of the two combined screens is highly uncommon and would make for an awkward experience when watching videos or looking at pictures. But ZTE had other plans in mind.

Instead of stretching media to fit, the Axon M uses the extra space to show things like the comments section on YouTube videos. When Twitter is in Extend mode (and the phone is held horizontally), the bottom display shows the keyboard, so it doesn't cut into the space above for you to compose your thoughts. The Gallery app makes use of the extra space by showing thumbnails of all your pictures on one side while displaying a full-size preview on the other. 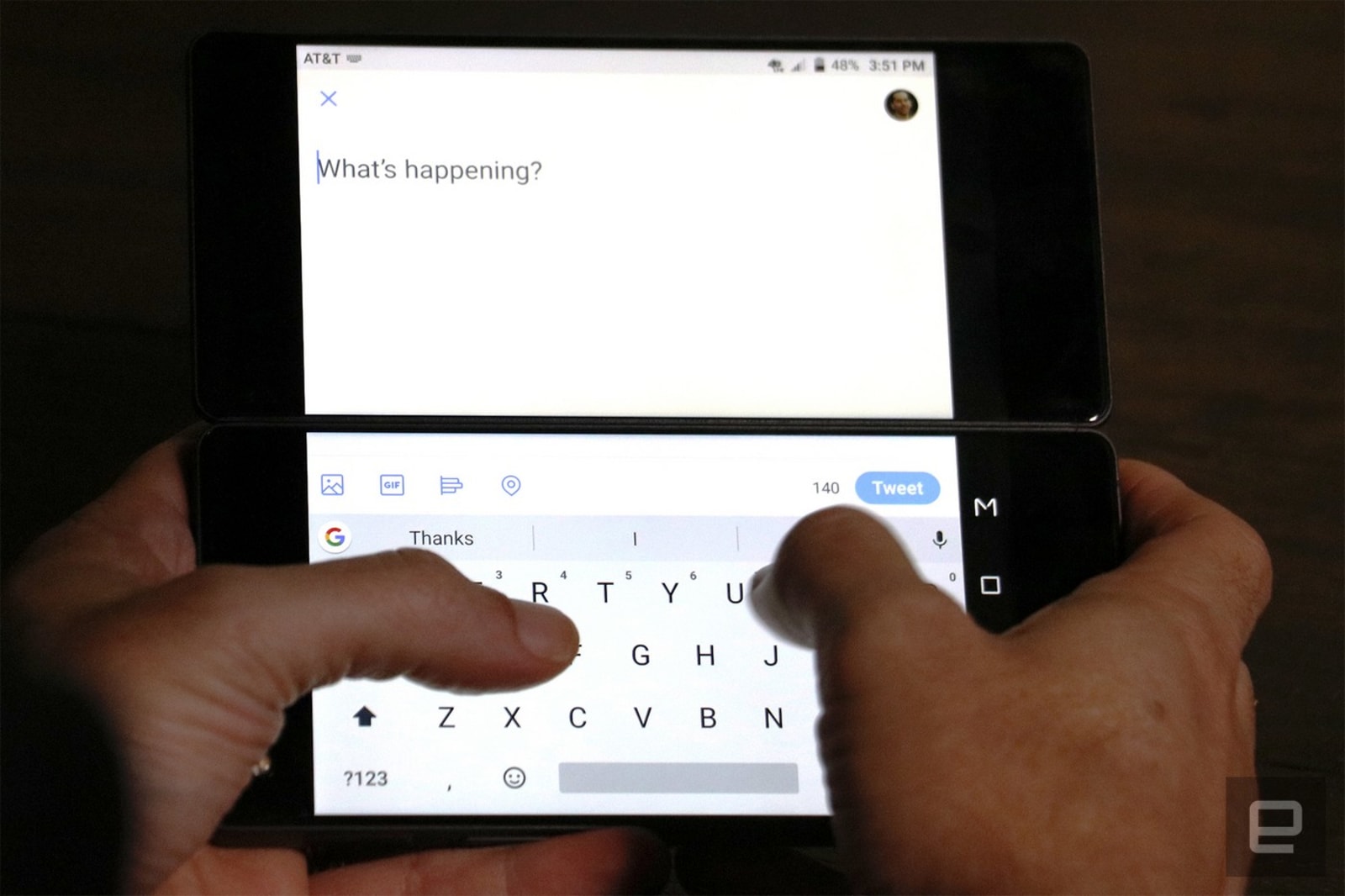 Apps work well in Extend mode when they're designed for it. ZTE says it has already optimized 80 of the 100 most commonly used apps, including Google Docs, Sheets, Slides, Photos, Chrome, Maps, Gmail, Facebook, Twitter, SoundCloud, Firefox and Pandora. Apps that haven't been optimized will go into tablet mode when Extend is activated to make use of the larger canvas. The difference, though, is that these apps won't realize that there is a half-inch tall gap in the middle of the display, so when you're, say, scrolling through an article, words will be lost in that dead space. Optimized apps, on the other hand, will skip over this gap so you won't miss any crucial information as you browse.

It's nice that ZTE is trying to alleviate this issue, but this fix doesn't feel like a feasible long-term solution. The gap is jarring when I'm trying to view things continuously across the two screens. It's less of a problem in Dual and Mirror modes, when boundaries for separate apps makes sense, or even in Extend when the gained space is used for something functionally distinct. Yee acknowledged this, and said the company's goal is to ultimately remove the bezel in future iterations. He's not sure if it's feasible within a year, but he said that achieving it in two years is possible, given the technologies he is seeing emerge. 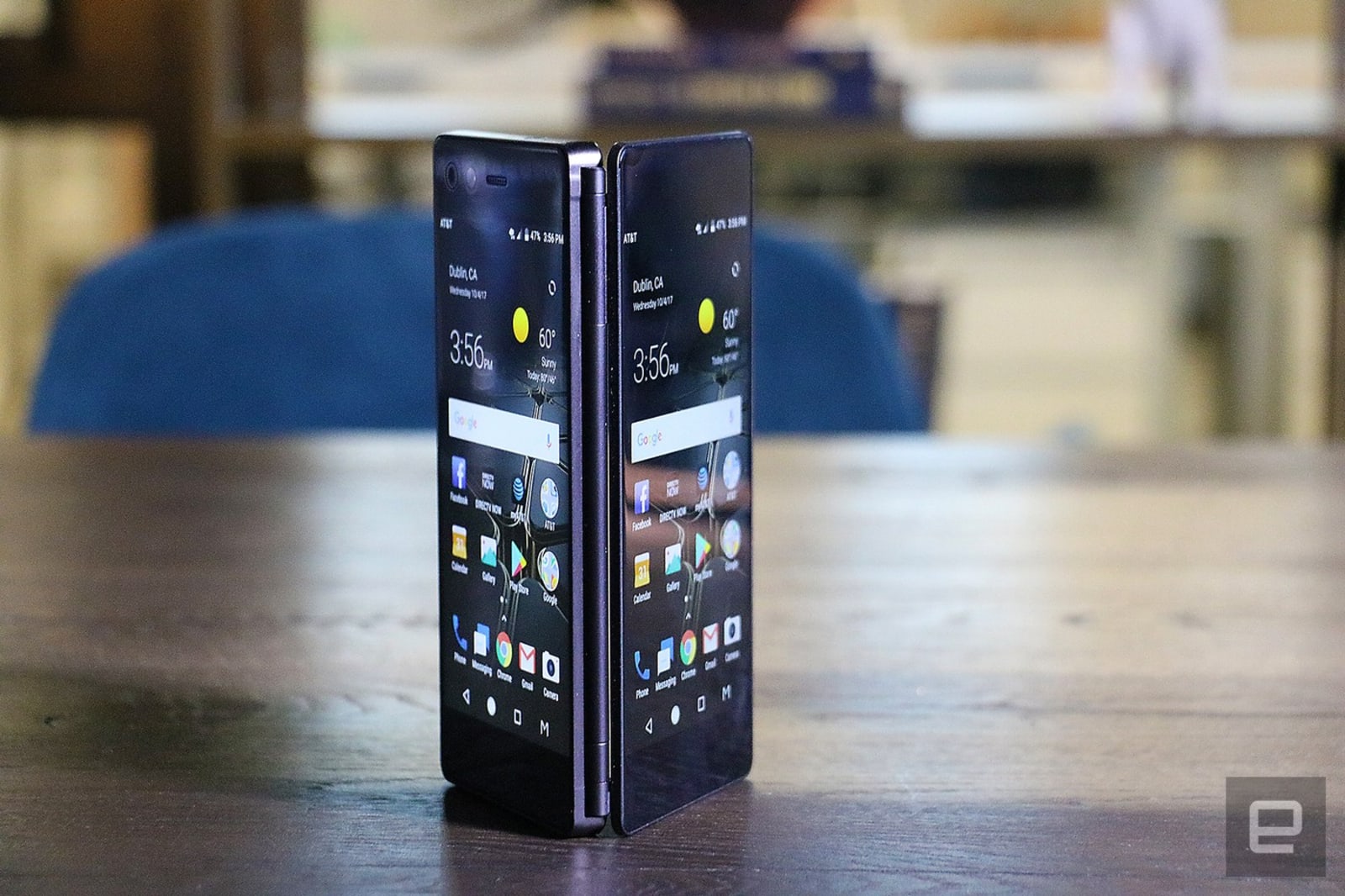 Meanwhile, the company has implemented a handful of features to make such a unique device feel easy to use. You can swipe on the navigation bar when you're in an app to open it in Extend mode. Pinch to zoom works in full screen, too, even if one finger is on the top panel and another is on the bottom. If you have two videos open in Dual mode, only the audio from one will play, and a button will appear on the top right of the main display to let you toggle the source from which to play sound.

Speaking of, the Axon M is equipped with the same dual speakers and dedicated sound card as the Axon 7, which made for loud, crisp audio during my demo. I also found the Axon M's screen quality decent -- both screens use LCD panels with full HD resolution. Although they're technically identical, I noticed some discoloration on the secondary display when I looked at it from a wide angle. Straight on, though, image quality appeared to be the same across the board. 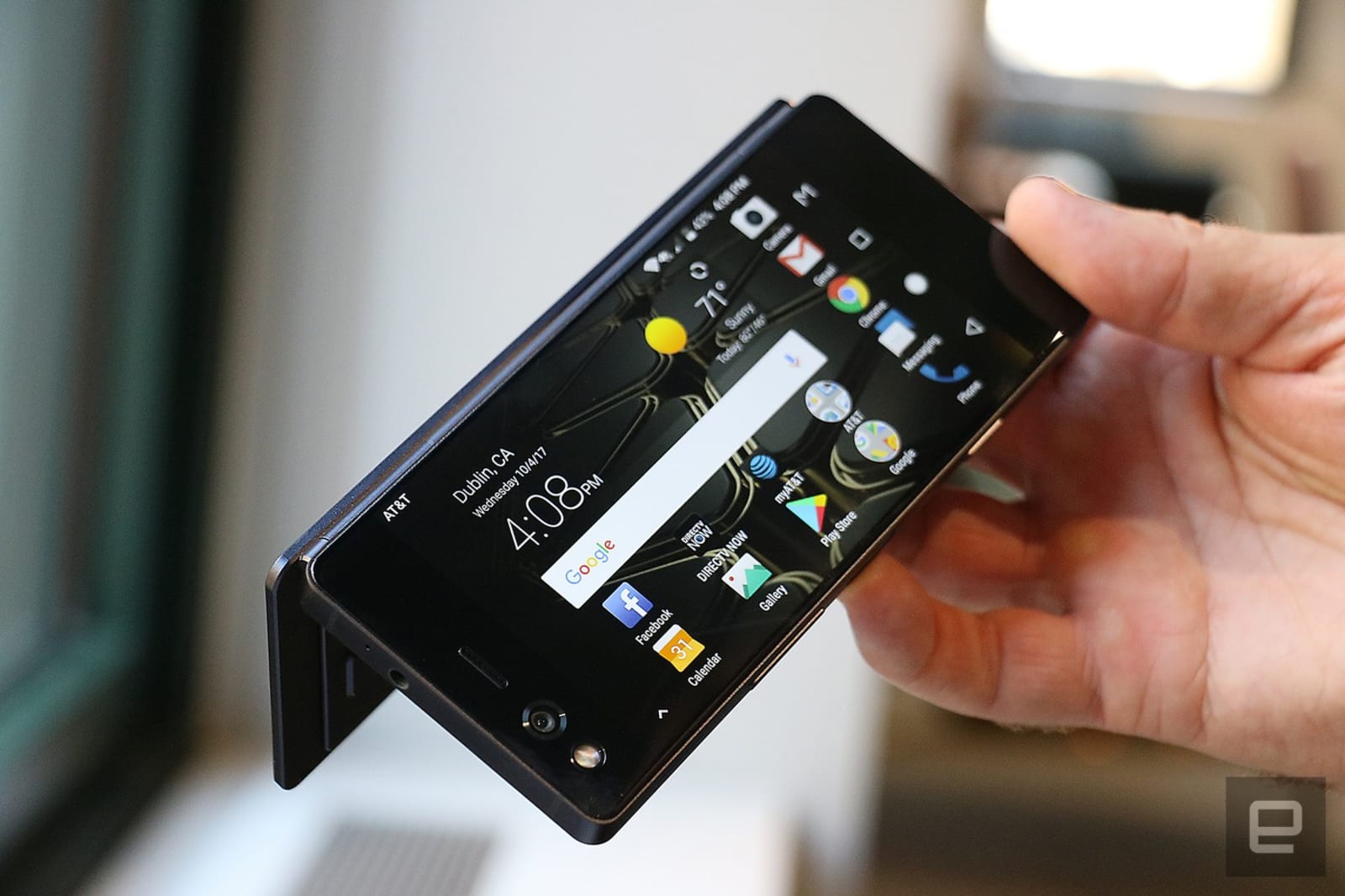 Since it's a dual-screen phone, the Axon M technically doesn't have a front or back. Because of that, it doesn't need to distinguish between rear and front cameras. ZTE uses just one 20-megapixel sensor above the Axon M's main display, opting instead to enable the respective screen for the viewfinder. This can be confusing. When I first opened the camera app, it defaults to the rear even though the sensor was already facing me. So the first thing you'll see is a message asking you to turn the phone around and use the screen on the other side to frame your picture.

When you tap the icon to use the "front" camera, an alert pops up to tell you to turn the phone around, and the other display is enabled. It's an unwieldy setup that would almost be worth the hassle if the pictures turned out great, since this is technically one of the sharpest front cameras around. Unfortunately, the photos I took with my preview unit were muted and dull. Give me back a dedicated selfie camera, ZTE! 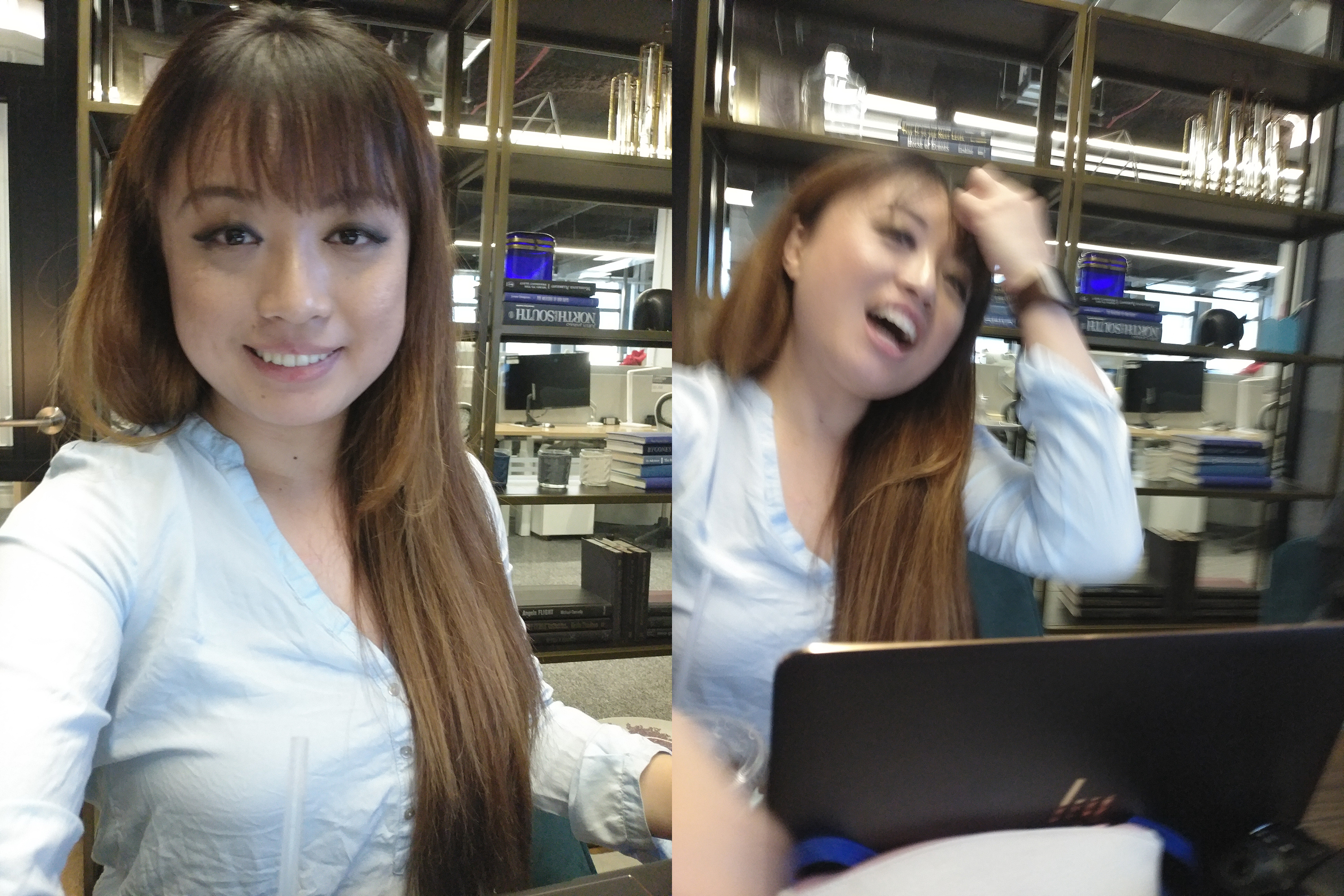 A big point of concern about a phone with two displays is battery life. The Axon M has a 3,180mAh cell, which the company says will last about a full day, depending on your usage habits. Yee said it's not yet clear how best to estimate runtime, since the company has to test the phone in both single-screen and dual-screen conditions.

The Axon M's Snapdragon 821 processor isn't the newest chipset on the market, but performed admirably in the OnePlus 3T. During my preview, the Axon M ran smoothly, and its 4GB of RAM seemed enough to handle the device's multitasking. Granted, I didn't get to push the phone to extremes to see how well it holds up.

Ultimately, the Axon M still feels like a proof of concept. ZTE is aware it will face challenges with such a unique product, and says it remains dedicated to both the Axon M (dual-screen) and regular Axon (single-screen) lines. Yee said the company will launch a developer website to offer "tips and tricks" on how to optimize apps for the Axon M. For now, the Axon M feels like the first iPhone -- not as sophisticated as today's flagships, but it lays the groundwork for future generations. 9
In this article: DualScreen, gadgetry, gadgets, gear, mobile, smartphone, zte, zteaxonm
All products recommended by Engadget are selected by our editorial team, independent of our parent company. Some of our stories include affiliate links. If you buy something through one of these links, we may earn an affiliate commission.