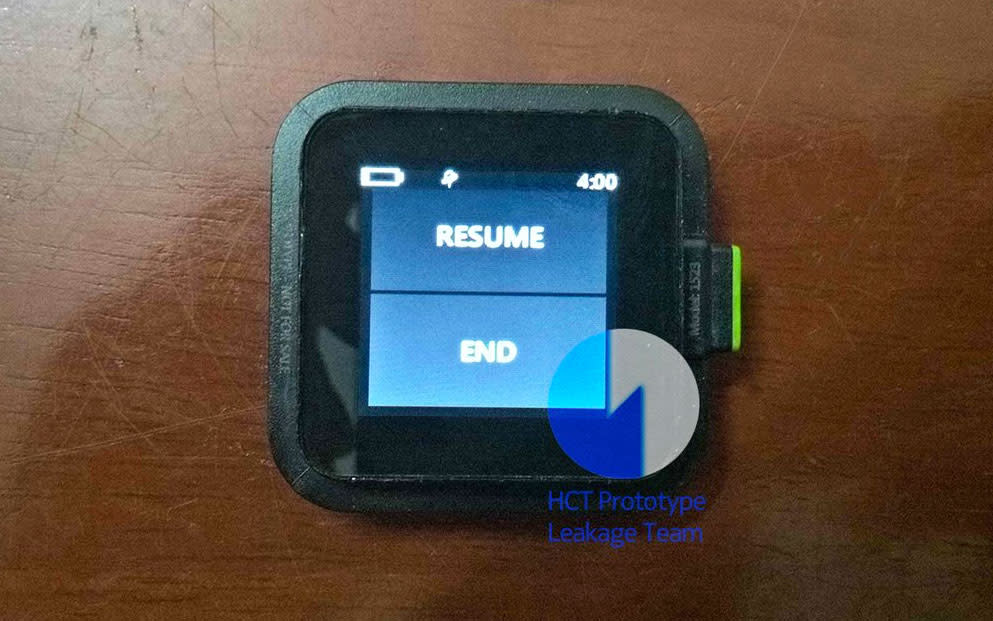 Microsoft has a tumultuous relationship with smartwatches. Its bulky wrist-mounted wearable, the Band and Band 2, saw limited success at retail but couldn't compete with sales of the Fitbit or the Apple Watch. As of October 2016, it seems the Band brand has been shut down for good. However, hands-on photos shared by Twitter user @Hikari_Calyx show Microsoft was prototyping another fitness tracker that incorporated Xbox-style tiles in a more traditional smartwatch package.

According to the photos, the Xbox Watch was sports-focused, offering tabs for workouts, heart-rate monitoring and GPS tracking. It had a black, square screen with rounded edges, and would ostensibly connect to a variety of wristbands, much like the Apple Watch does. This is something Microsoft would have been working on around 2013, about one year after the Pebble smartwatch raised more than $10 million on Kickstarter.

Try to feel terrible resolution of Xbox Watch... If you find the Xbox Watch can't be recharged, you can disassemble the screen with an utility knife or a razor, then hit the positive pole on the battery with piezoelectric ceramic igniter from a lighter. pic.twitter.com/TcQwMcvJEQ

Microsoft's experiments with the Band and Band 2 led the company to a clear conclusion: Smartwatches aren't worth it. That seems to be the case, at least. Microsoft hasn't released another wrist-bound wearable since the Band 2 landed in 2015, and it doesn't even have a mobile OS any longer. Instead, the company is more focused on mixed reality (bringing VR and AR into our everyday lives) and the future of artificial intelligence. This doesn't mean the Band was worthless -- Microsoft will surely infuse future designs for VR headsets, AR glasses and other wearables with lessons learned from the fitness tracker and its abandoned Xbox Watch.

In this article: design, gadgetry, gadgets, gear, leak, microsoft, smartwatch, watch, wearables, XboxWatch
All products recommended by Engadget are selected by our editorial team, independent of our parent company. Some of our stories include affiliate links. If you buy something through one of these links, we may earn an affiliate commission.