It's a huge collaborative screen that can rotate into a portrait mode.

Remember the Surface Hub? You probably don't. Unlike Microsoft's other PCs -- the Surface Pro, Book, Laptop and Studio -- the Hub was a giant and expensive device meant for workplace collaboration, not average consumers. It was never going to star in commercials or turn heads at Best Buy. And even Microsoft admits that it only sold to more than 5,000 customers. But its successor, the Surface Hub 2, is another matter entirely.

It's a sleek 50.5-inch 4K+ display (the exact resolution is still being finalized) that can be rotated with a slight push, turning it into huge portrait screen. That makes it useful for both scribbling notes with colleagues, or video chatting with someone that's almost life-sized. You can tile up to four together to create an even larger display, or spread multiple Hub 2s around the room, each serving different roles. It features rolling cases and mounts co-developed with Steelcase, which Microsoft partnered with last year to envision creative workspaces. Even its 3 x 2 aspect ratio is unique, since every other large screen these days is a wider 16 x 9.

The Surface Hub 2 isn't just another connected display. It's a bold attempt at transforming the way we work. Panos Panay, Microsoft's chief product officer, describes it as more of a huddle board -- something that'll get people out of their seats and collaborating in entirely new ways. Naturally, there's touchscreen support, but you can also throw documents to the Surface Hub 2 from your computer, or control presentations using your phone. And perhaps most importantly for Microsoft, it's deeply connected to Teams, which could encourage more companies to move over to its Slack rival.

"People will engage differently as the form factor enables them," Panay said in an interview. "It's sort of like your phone. You pick up that device for the first time and your behavior has changed. You pick up a Surface device for the first time, and you've changed... We already have customers that are using it, we have IT pros telling us what they need, we have facilitators telling us where the future of the office is going. We can see how people are starting to change."

Sure, that might just sound like marketing hype. But it's a bit more believable today, after seeing how Microsoft's other Surface devices broke new ground for PCs. While the Surface tablets got off to a rough start, Microsoft eventually found its footing with the Surface Pro 4 and the most recent Pro, paving the way for convertibles and hybrid PCs from other companies. The Surface Book pushed that concept even further to fit in hardware you'd expect from a powerful workstation. And the Surface Studio's tilting screen made it far more versatile than a typical all-in-one. (The Surface Laptop is, well, just a laptop. But at least it's a very nice one.)

Seeing someone rotate a 50.5-inch screen is surprising at first. But after witnessing a pre-production Surface Hub 2 in action at Microsoft's campus, it's easy to see how it could be compelling to office workers. In portrait mode, the device becomes something more akin to an easel. It's tilted at an angle to make writing easier -- but it's almost as if it's inviting you to interact with it. And since it's not a traditional widescreen display, you can also still reach the top.

Video chatting on the Surface Hub 2 in portrait mode is a revelation. Conceptually, it's similar to holding your phone in portrait mode during a video call, just at a much larger scale. In practice, that larger scale means people appear life-sized on the Surface Hub 2, as if you're beaming them into your office. Naturally, the experience is best if that other person is also running a Hub 2 and one of its 4K cameras. But it'd be useful even with a typical webcam or phone camera. 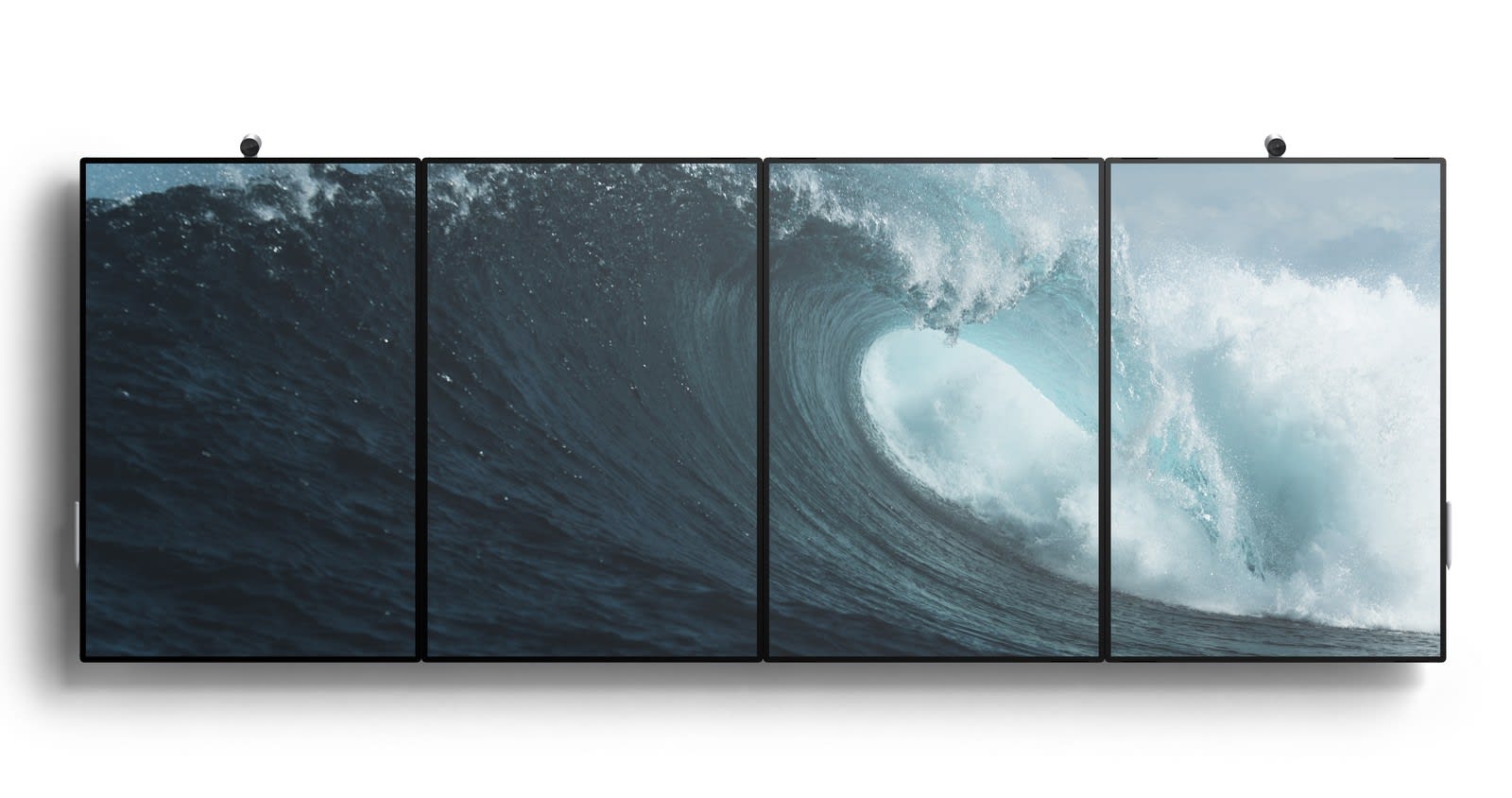 Instead of offering a giant 84-inch Hub 2, you can connect several displays together (up to four) for a similar big-screen effect. Of course, you'll have to live with the bezels breaking up the image. But the tiling strategy will likely be far more palatable to IT departments, since they can build up their investment in the Surface Hub 2, instead of plonking down $21,899 for an 84-inch monstrosity few people might use. (Panay also hinted that we'll see other Surface Hub 2 sizes, eventually.)

According to Robin Seiler, a general manager at Microsoft's hardware division, and one of the co-creators of the Surface Hub 2, it's a device that's "designed for modern work." Specifically, it's a big bet on the push towards group collaboration, something that's becoming increasingly common as digital natives enter the workforce. Seiler says current statistics indicate that around 50 percent of our work every day is done with another person.

"Surface Hub [1] really taught us two things," Seiler said. "When people want to meet together, they don't want the friction of getting things started... But the other thing that our customers tell us is, it allows people to get up and stand side-by-side. And when you work together like that, you dynamically create, instead of me doing a little bit, and then sending you an email and tell you to check it out later." 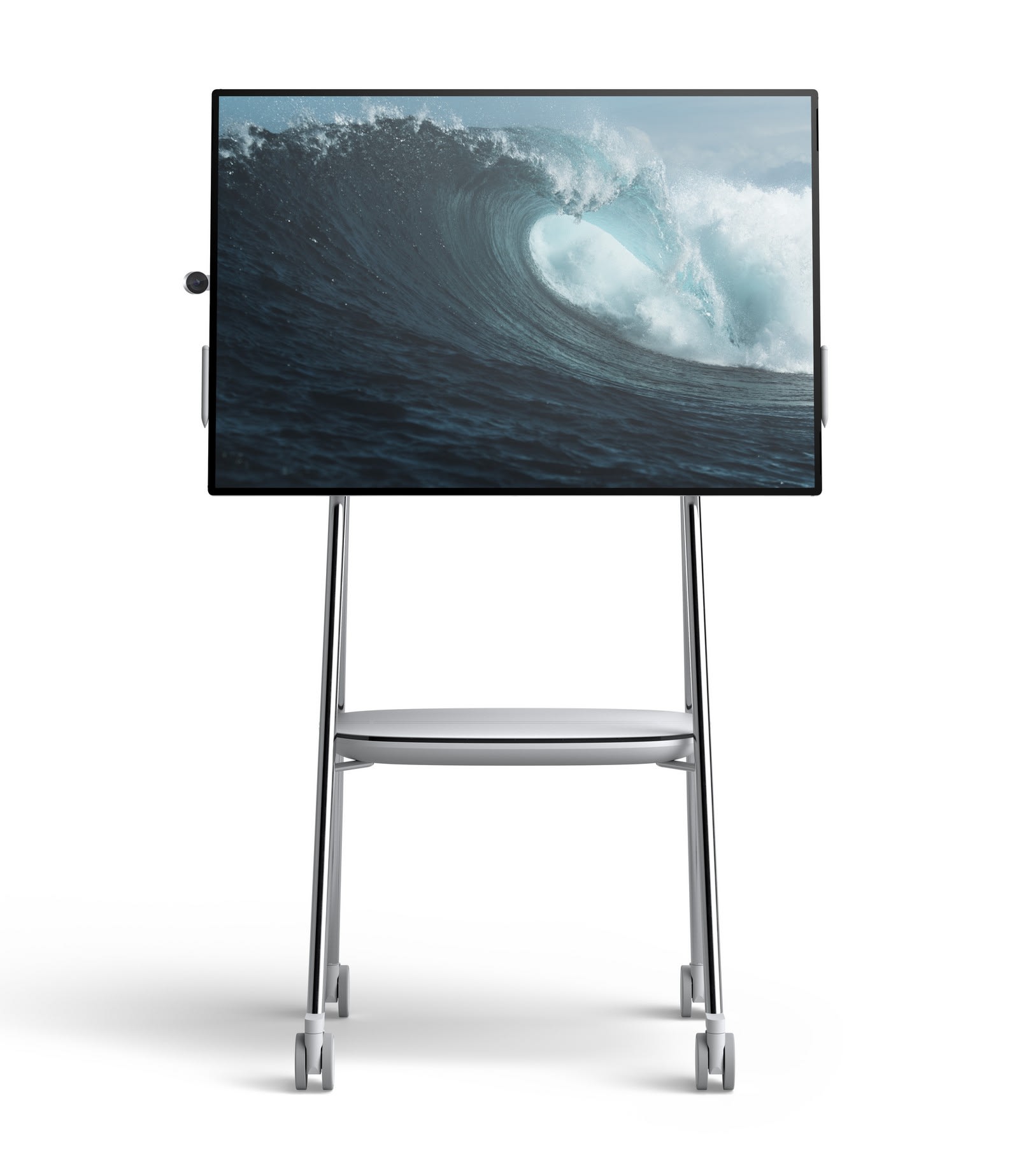 To make collaboration easier, the Surface Hub 2 also lets multiple people sign in with their Microsoft accounts, allowing you and a colleague to access your files without grinding your productivity to a halt. It's also yet another sign of how deeply the Surface Hub 2 is connected to Microsoft Teams. You're free to run any collaboration suite -- it's still a Windows PC, after all -- but in many ways the device feels like a Trojan Horse for Microsoft's corporate wares.

It's too early to tell if the Surface Hub 2 will be the groundbreaking workplace tool Microsoft hopes. But, at the very least, it has a better chance than its predecessor. The company will start testing the Surface Hub 2 with partners later this year, and it expects to officially release the device in 2019. There aren't any pricing details, either, but hopefully it'll be cheaper than the $8,999 Surface Hub and more competitive with Google's $5,000 Jamboard.

"In product making, I believe there's always a difference between an emotional and a non-emotional product," Panay said. "It doesn't matter if it's an IT space, or a business environment. At the end of the day, if there's something that gets people connected to the products themselves, it kind of brings the best out."