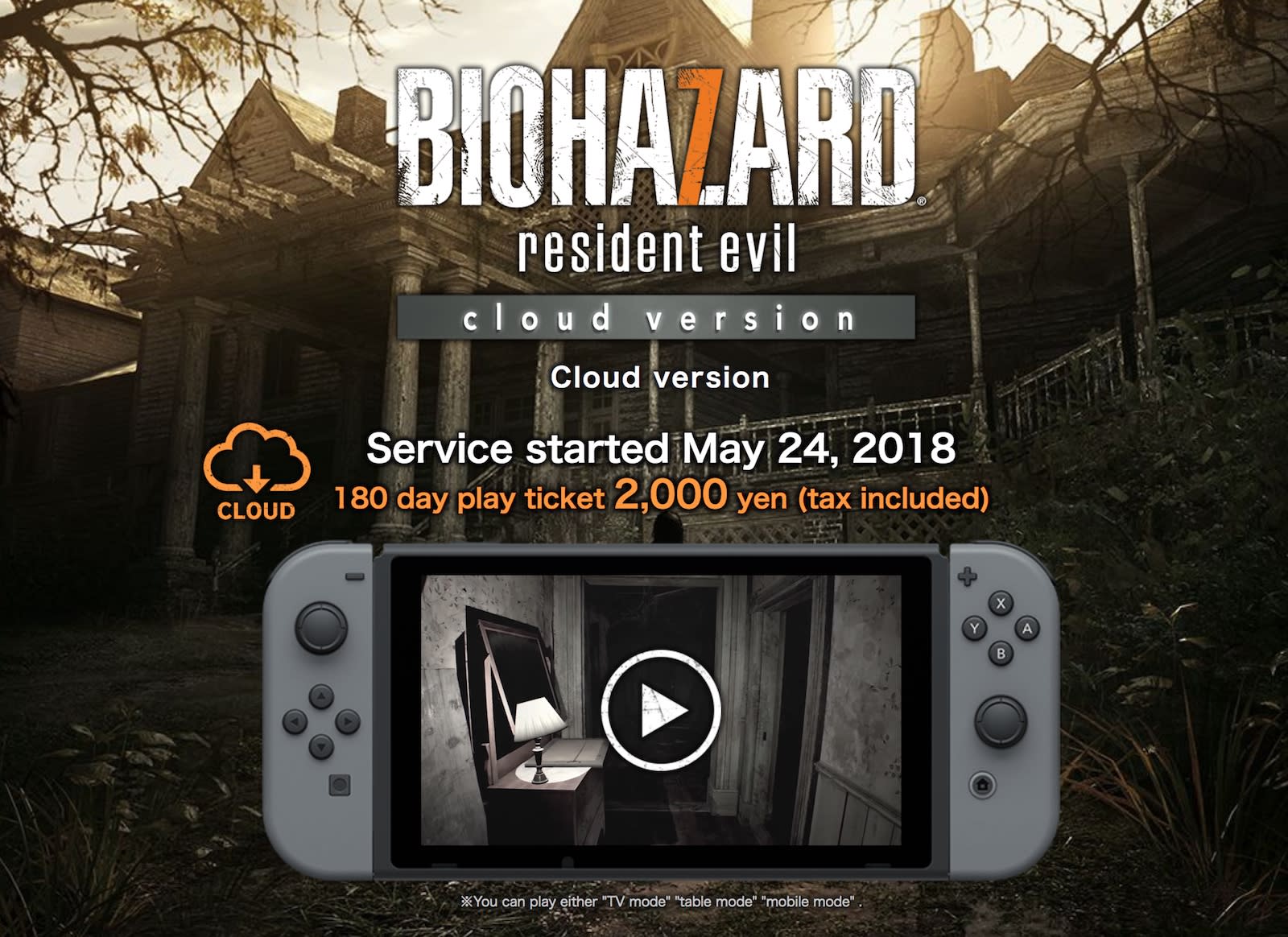 The Nintendo Switch might not be the most capable piece of gaming hardware on the market today, but it never ceases to surprise us. Case in point: This morning Capcom announced that last year's terrifying Resident Evil 7 biohazard will be available on Nintendo's latest console later this week. The wrinkle here is that unlike Doom or the forthcoming Wolfenstein 2: The New Colossus, you'll stream the first-person horror-fest's port rather than downloading the game file all at once.

According to Capcom's Japanese microsite for the game, Resident Evil 7 biohazard Cloud version (whew) will feature the main game and three previously released expansions. It'll be available in Japan starting May 24th (that's soon!), and a 180 day play ticket will set you back ¥2,000 ($18). There will also be a timed 15-minute demo for those feeling curious. It won't let you play much, but in that timespan you should be able to see how the graphics translate to the lower-powered console and how visual fidelity and the frame-rate translate to a streaming situation.

There will be an "intuitive" Joy-Con controller configuration according to Capcom. The publisher recommends a newer WiFi environment for best play results, including a 802.11ac 5GHz network. Or, a wired LAN adapter. The streaming helper file looks like it'll take up 45MB of space on your Switch.

The devil is in the details, though: Because your save files are stored server side Capcom doesn't guarantee they'll always remain playable and uncorrupted. "If the 'validity period' of the 'voucher' ends, data retention is not guaranteed. Also, even during the valid term of the 'usage ticket,' we will not guarantee surely that your save data is stored without defects and that it will be read out."

That's the machine translation. Our resident Japanese speaker, however, said that the last bit is written in less certain terms in its original version, and mentions saves may be corrupted via unforeseen bugs or glitches. Not that they will be, but that it's a possibility. As anyone who's been playing games for awhile can tell you, though, there's always a chance locally stored game data can be corrupted as well.

If this experiment works out, and the game looks better than it could running on the Switch's local hardware, without a bunch of controller lag a la PS Now streaming, it could open up a world of opportunity on the console. After all, we've seen how well NVIDIA's GeForce Now works on PC, running Destiny 2 on a $300 laptop with ease, and that's still in beta.

In this article: 5ghz, 802.11ac, av, gaming, gamstreaming, horror, internet, nintendo, nintendoswitch, residentevil, residentevil7, streaming, switch, wifi
All products recommended by Engadget are selected by our editorial team, independent of our parent company. Some of our stories include affiliate links. If you buy something through one of these links, we may earn an affiliate commission.