‘FIFA 18’ let me live out my World Cup fantasies

EA Sports didn’t skimp on details with its free update for the game.

It took a few tries, but I was finally able to lift the World Cup trophy with my beloved Mexico in FIFA 18. It wasn't an easy feat, either; I had to get past football superpower Germany in the final. But it happened, a 3-2 win! And that's probably the only way I'll ever get to see Mexico win soccer's most important competition. Over the past few days, I've spent most of my spare time playing FIFA's new Russia 2018 World Cup mode, which EA Sports made available free to all owners of the game on PC, PlayStation 4, Xbox One and Nintendo Switch. That gesture alone deserves a lot of credit, since during the last World Cup in 2014 the developer released a standalone game for the tournament that was $60. And that was just for the PlayStation 3 and Xbox 360. The latest-generation of consoles only got a disappointing, stripped down version.

But this year EA Sports made the right choice by making the World Cup content free and not skimping on features. On the Xbox One X, the FIFA 18 Russia World Cup graphics look gorgeous, thanks to detailed stadium renders that are life-like and a crowd atmosphere that makes you feel as if you're watching an actual match on TV. If you're playing with Mexico, as I was, you'll notice fans in the stands going crazy every time you score, some wearing traditional sombreros and their faces painted green, white and red (the colors of the Mexican flag.) 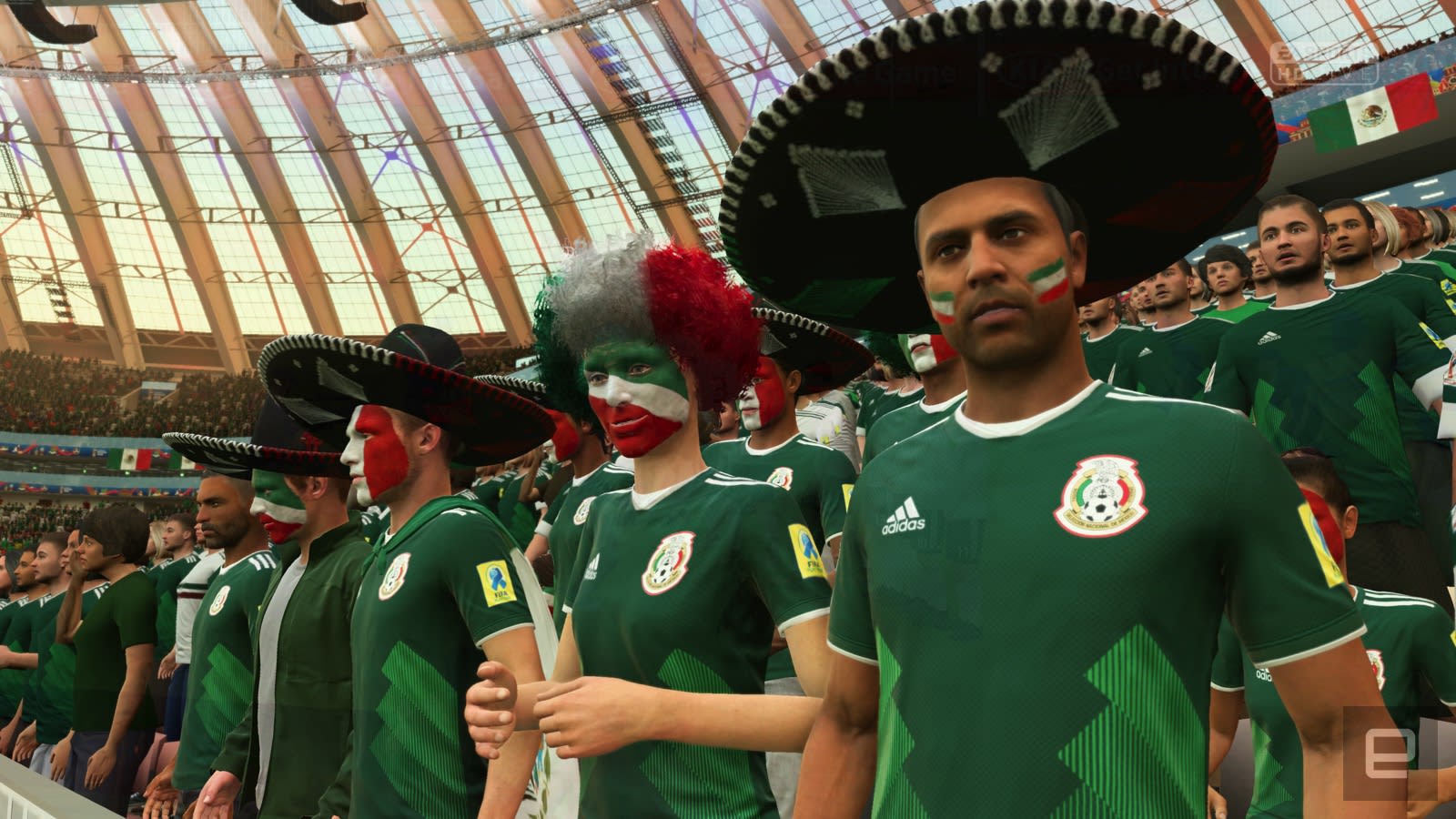 As always, it helps that EA Sports has the FIFA licensing rights for the event. That's what allows it to bring the 12 official Russian stadiums to the game, as well as the players representing their countries, including Lionel Messi for Argentina and Cristiano Ronaldo for Portugal. The gameplay itself isn't different than regular FIFA 18 matches, so you can expect the same type of player movements and controls.

Once launch the Russia World Cup mode in FIFA 18, getting started is simple: You can either begin a tournament with the 32 teams who qualified to play this summer, or you can create a custom one where you can swap in the teams of your choice in. This is going to come in handy for members of the USA squad who are spending the summer sitting at home playing FIFA 18 just like you, after managing to drop a deciding match to Trinidad and Tobago last year.

There's also an Ultimate Team mode, which will let you play the World Cup with a team of players from different countries. So, if you have enough virtual currency or luck, you can win the tournament with Messi and Ronaldo on the same team.

I was simply interested in winning the World Cup with Mexico in the hardest setting, Legendary, which ended up being far more challenging than I imagined. I had to take a crack at the tournament three times before I won. I kept getting eliminated in the Round of 16 by Brazil and its roster full of superstars (like wunderkind Neymar).

One thing that I did find annoying is that, during games, the commentators would often talk about how the referees didn't have a way to correct their mistakes. With Video Assistant Referee (VAR) now being approved by FIFA for use at the Russia World Cup, that's obviously not accurate, but I can also see how it would be complicated for EA Sports to make that work in a video game. As the system becomes more widely adopted in professional soccer leagues, though, it'll be interesting to see how EA Sports handles it in future editions of FIFA.

For now, the game's 2018 World Cup update is everything I hoped for. And best of all, it doesn't cost you a dime if you already own FIFA 18.