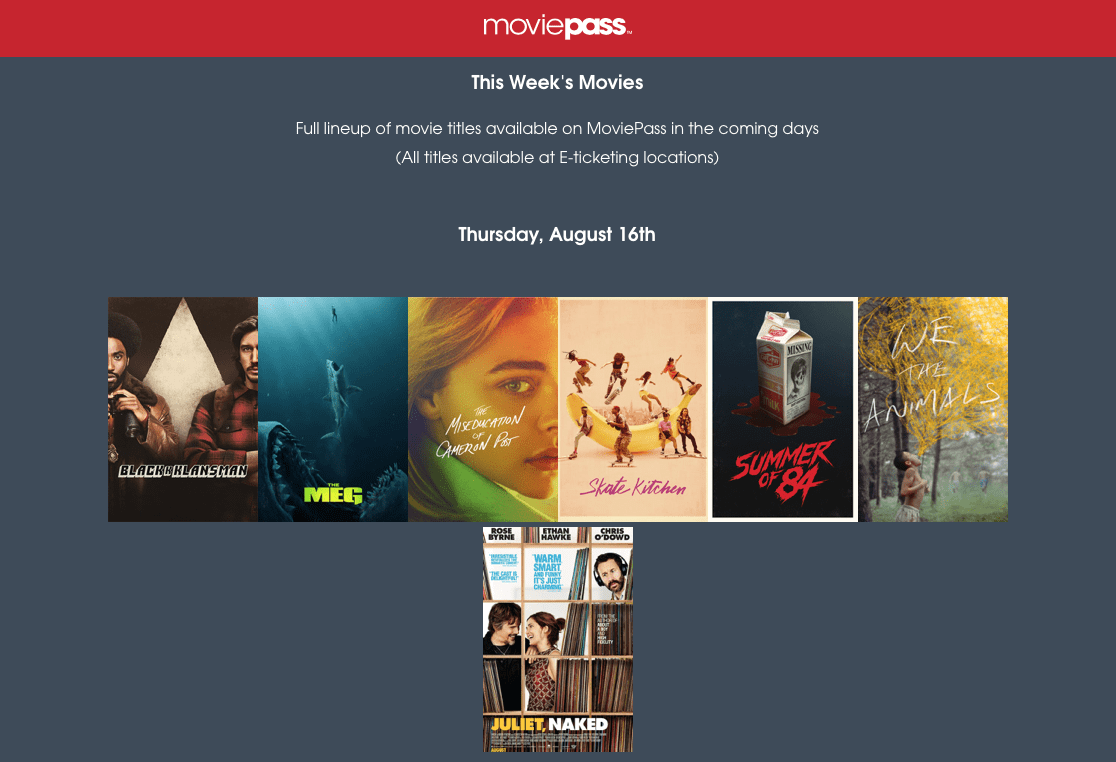 MoviePass is changing its service yet again and for the foreseeable future, it will significantly limit which films its customers can see on any given day, Business Insider reports. In a letter to its users, which the company began sending out today, it said that as it transitions to the new subscription plan it began imposing yesterday -- limiting monthly subscribers to just three films per month -- it will offer a limited selection of movies and showtimes each day. "During this transition period, MoviePass will offer up to six films to choose from daily, including a selection of major studio first-run films and independent releases," said the letter. "In addition, showtime availability may be limited depending on the popularity of those films on the app that particular day."

You can see what films are available on MoviePass' website and the company says it will publish its daily lists at least a week in advance. The schedules available now, which run through August 26th, list seven movie options each day but the site notes that all movie titles, not just the limited selection, are available at e-ticketing locations.

We want to share more details about our service moving forward as part of our commitment to keep you fully informed. Here's a full lineup of movie titles available on MoviePass in the coming days: https://t.co/BE9St1gDfF pic.twitter.com/OFCR56fcGd

Due to its growing money woes, MoviePass has announced a number of changes to its service over the past few months. Its most recent -- reducing the number of films that can be seen per month -- also walked back previously announce changes like surge pricing and a price increase. Earlier this week, shareholders of MoviePass' parent company Helios and Matheson Analytics filed a lawsuit against the company claiming "there was no reasonable basis to even imply that the MoviePass business model could lead to profitability."

In this article: av, business, entertainment, film, moviepass, movies, services, TL18MVPS
All products recommended by Engadget are selected by our editorial team, independent of our parent company. Some of our stories include affiliate links. If you buy something through one of these links, we may earn an affiliate commission.