A proper explanation of Google’s Android One program

Don’t mistake it for Android Go.

I must admit I didn't know much about Android One before coming to IFA 2018. I had assumed it was some form of software or set of specifications for midrange phones, although a lot of people around me were also confusing it with Android Go. Android One is neither of those things. If you're here expecting an Android Go explainer, sorry. Best go live your life now. This is not the (An)droid you're looking for.

What I am talking about is Android One -- a program to make third-party phones that run pure Android software. It was introduced in 2014 to address "a universal need for smartphones that are fresh and secure, and bring the Google apps and services they love," according to the program's director of partnerships for EMEA Anne Laurenson. Basically, Google works with manufacturers to make a range of devices that meet certain requirements so you know what you're getting when you buy Android One. It's not a new version of the OS, it's more like a franchise. It's also nothing like the Pixel series -- Google has all the say in making those. Essentially, the Android One program is about branding.

On the other hand, Android Go is a lightweight OS that uses less memory and can run smoothly with lower-end components. Most Go phones tend to be cheaper and are meant for people who don't want to or can't afford flagships.

Android One phones run a wider gamut in terms of quality. Sure, so far they haven't been high-end, premium devices, but they're not all $100-phones either. Before we go too far into that, though, let me explain the Android One program. 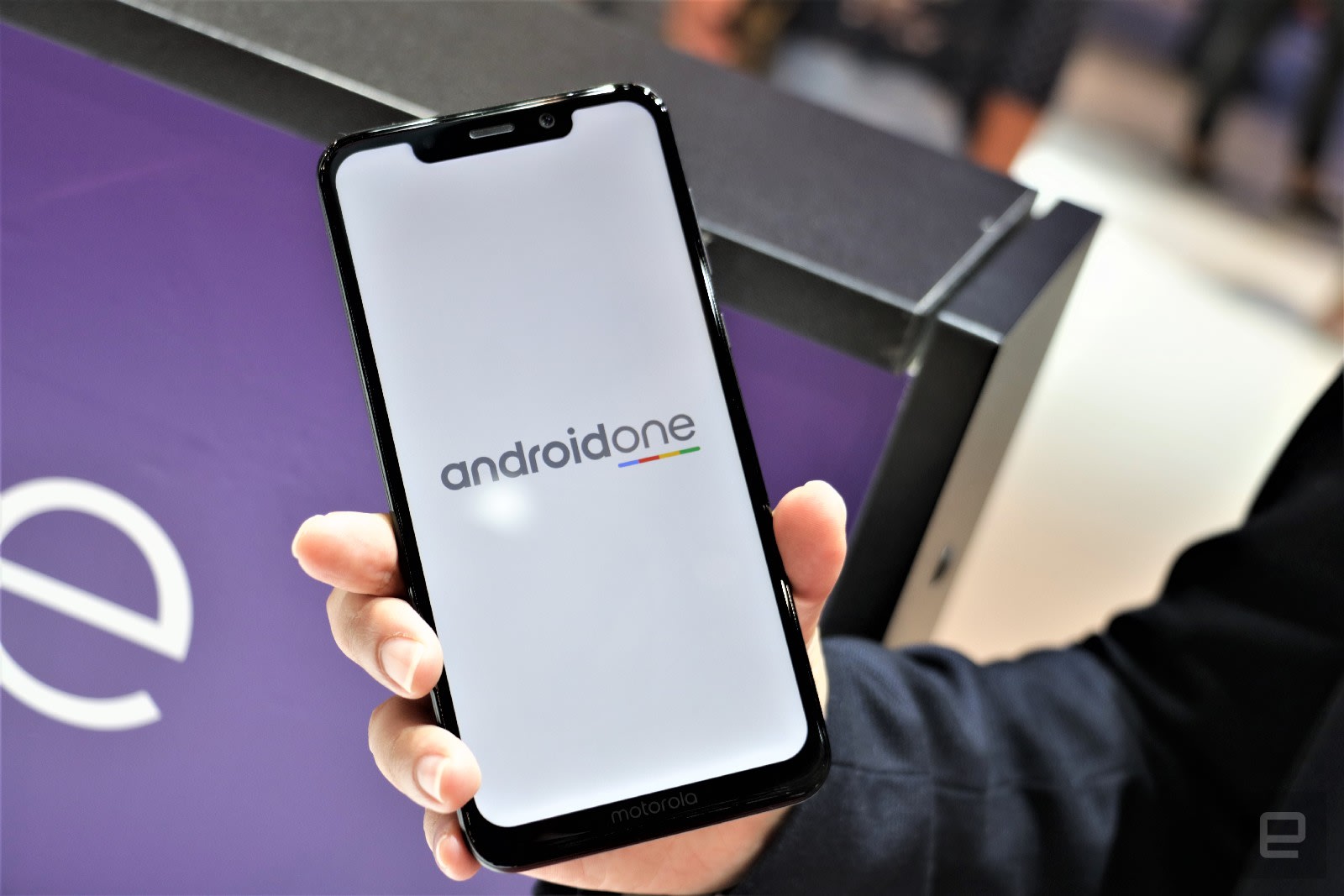 Remember a time when phones would sometimes come in a "Play Edition" variant that ran stock Android? The Android One program is somewhat similar to that, except Google is far more involved. It works with phone makers to ensure that these Android One products meet certain requirements, are secure and run a clean and familiar Android interface. Android One is also a long-term, multi-year program instead of one-off versions of specific models.

Google has various sets of requirements for phones that want to be Android One-branded, too, though it hasn't published these. Unlike the Android Open Source Program, which anyone can take and build upon, Android One has more stringent criteria. Google also goes back and forth with OEMs to make sure the final One devices work well.

Laurenson told Engadget that in working with phone makers, Google learned a lot about what users want. This insight helps the company tweak its requirements according to different regions and industry trends, so that Android One devices remain relevant.

"It's not like we are a judge," Laurenson said of the collaboration. "It's joint work. The most important thing is that they're able also to keep the promise (of Android One)."

When a company wants to develop an Android One device, it gets in touch with Google, which then provides a bunch of criteria. Depending on the region or timing, this could look very different. In India, for example, dual-sim is a popular feature, and Google might require it. This year, it might make 5.2-inch the minimum screen size, though if it were five years ago it probably would have asked for smaller displays.

This is another reason why Google doesn't publish its requirements for Android One -- they could change pretty frequently. It's also why there is a wider range of Android One phones -- they won't just be different-branded replicas of each other.

Take the LG G7 One, for example. It uses a Snapdragon 835 chipset, has a 6.1-inch QHD+ screen and a 12-megapixel camera with a f/1.6 aperture. Sure, it may be pared down compared to the G7 ThinQ flagship, but within the Android One portfolio this is pretty premium.

The Motorola One and Motorola One Power also launched here at IFA 2018. The latter is an India-only variant, while the Moto One will launch worldwide, starting in Mexico on September 13th. It'll cost 300 euros, and for that money, you're getting Snapdragon 625, a 720p screen and dual cameras in a pretty slick, albeit iPhone-like body.

There's also the Xiaomi Mi A2, which launched about a month ago. It's a follow-up to last year's Mi A1, which Google's Laurenson said was a successful launch between the two companies. The Mi A2 uses a Snapdragon 660 processor, features dual-cameras and a 6-inch full HD+ display. It even has a 20-megapixel front camera, if you fancy some super sharp selfies. And, unlike the rest of Xiaomi's phones, these One devices run clean Android, without the MiUI skin that annoys so many people

At this point, there are 15 Android One devices -- well, that were launched in the past two years, anyway. These more-recent releases will all see updates to Android 9 Pie by the end of 2018, according to Google, which is another benefit of the Android One program. You'll get similar update cycles to the Pixel phones, and see timely security updates from Google itself. Plus, there's very little bloatware on them, if any at all, so your phone's storage is maximized for your the apps and data you actually want.

What you're ultimately getting from the Android One program, is an endorsement from Google. It's a guarantee that One-branded phones are secure, bloatware-free and have relatively modern specs. When you go out to buy your next phone, you're likely to see Android One branding in stores, and it'll be an indicator that those devices run up-to-date, clean Android software. The new features from latest releases, like Pie, will be available on these phones quickly, too. "It's really about Google's project to bring AI to everyone," Laurenson said.

You may also find a surprisingly diverse range of devices within the Android One portfolio that would suit the taste of almost everyone, except perhaps someone who really likes Samsung's software, for example. Sure, there aren't many truly "flagship" Android One phones (just the Nokia 8 Sirocco and the LG G7 for now) but I wouldn't rule out higher-specced options in the future. We'll see more new devices as soon as Q4 this year. 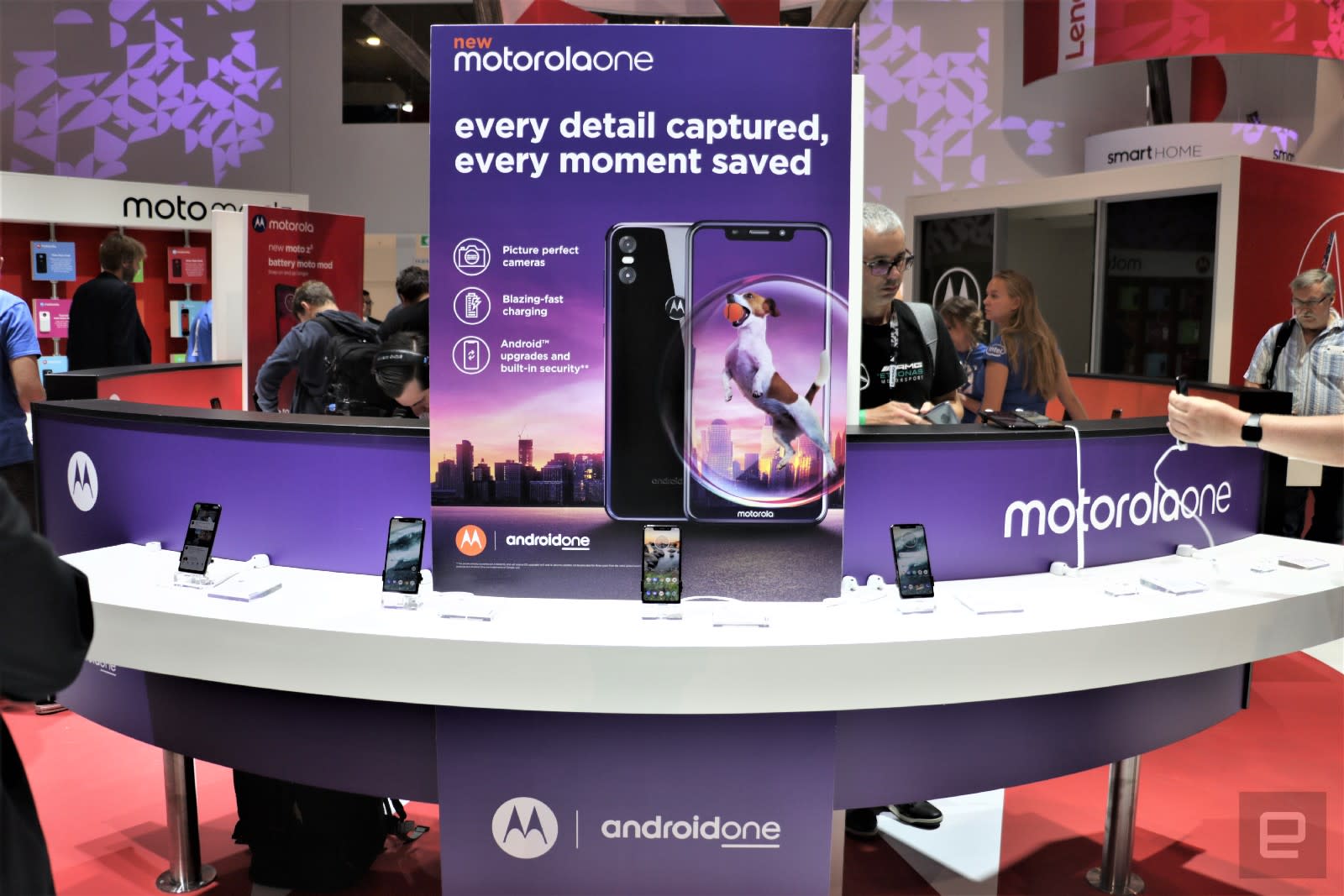 The Android One program was introduced in India in 2014, and Laurenson said it was later redefined as experimentally a few years ago in Japan and Turkey. Users apparently liked the pure Android experience in these phones, and Google's partners wanted to expand the program worldwide. In the last two years, the Android One team has ramped up its efforts, which is why you're hearing so much more about it lately.

There are now about two billion Android smartphones in the world, spanning offerings from 400 manufacturers. Android One seems like a way to regain some quality control and cohesion to help prevent consumers from feeling overwhelmed. It specifically targets Android purists, and Google is completely okay if you'd rather get a Galaxy or OnePlus phone. Those who want really good, pure Android phones -- and want more options than just the Pixels -- are the ones who will benefit the most from Android One.

Update (at 7:04pm ET, 9/3/2018): Clarified that the Android One program was introduced in 2014 in India and then redefined a few years later. Also updated to note that there are "truly" flagship phones like the LG G7 One and the Nokia 8 Sirocco.